We’ve got updates on our DLTR options idea for send morning in a row today. Just to recap for those who may have missed it, we formulated an idea for last Wednesday‘s premarket report, the  DLTR 04/21 $78-80 Calls.

With a very nice multi-day bullish run for DLTR in effect and continuing yesterday brought the stock to new highs once again, which means updates to our observed ranges on these contracts that we began tracking last week.

DLTR has now traded up from the $74 area, to nearly $80 over that spanm and in the event it breaks that $80 barrier, we would have to look at rolling up our strike prices to stay in the thick of things.

We saw a fantastic intraday run out of MMEX yesterday after once again tagging it in our premarket report. It included a continual climb throughout the session as the stock traded up from a low of .0081 first thing in the morning, to a high of .0169 just prior to the closing bell. That works out to a daily pop of 108%

Considering we alerted MMEX in last Friday morning’s report, and observed a low of .0046 at the time, we’ve now seen an overall increase of 267% from this play in just five trading days,

We want to swing back around for a quick mention of ATHX, which was a stock we put on our radars back in February. We would observe a low of 1.10 last month, but for the most part, ATHX just did a lot of sideways trading for the next few weeks.

All that finally began to change this week, with a run to a new high of 2.01 yesterday, marking a 83% rise off of our observed low. We may need to watch for a pullback before jumping back in for another run as the stock is now is extremely overbought territory.

We want to pay attention to a couple of stocks we’ve come across in the $3-range, that  based on a number of factors, appear to be ripening for rebounds that could very well take each one to the $5 level or higher.

Leju Holdings, Ltd. LEJU – This stock has been trying to get up off of its recent relative lows, and this morning appears to be gapping nominally. We’ll be watching for a more sustained rebound. 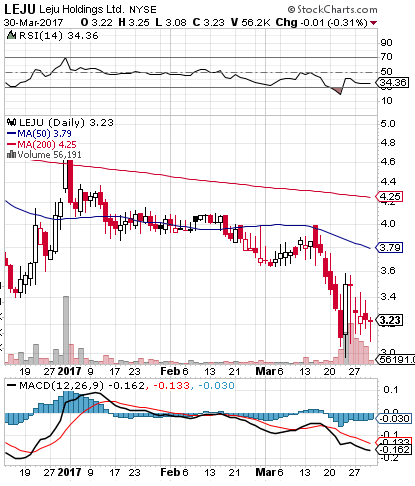 Cyclacel Pharmaceuticals, Inc. CYCC – We’ve identified a strong double-bottom signal from CYCC as well, along with the clear potential for volatility. This one’s going to go on our running watchlist as well. 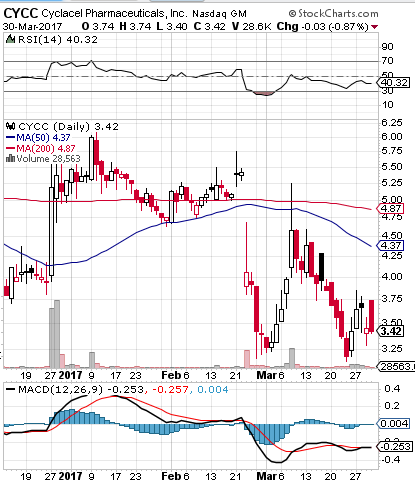 We placed HGTM on watch for the first time ever in yesterday’s premarket report, and the stock gave a heck of a solid performance, immediately serving up chances at some respectable single-session gains.

The stock traded in a range from 2.85 up to 4.90 which works out to an intraday spike of 72% It did pull back considerably into the close, but we’re definitely going to let it remain on our watchlist for the time being, as it managed to trade roughly 45X its monthly average volume.

Prior to yesterday’s report, the last time we had mentioned DOLV was back in 2015, so it might as well have been new.

It too made a respectable intraday run as it traded up from a low of .0056 and reached a subsequent high of .00975. That worked out to a 74% intraday pop, although it didn’t occur on much more than the 30-day average volume.

This is a play we’ve been tracking pretty closely since the end of 2016, with our observed low on the stock coming in at .001 (Feb.16th).

Most recently we re-tagged it in Wednesday’s premarket report, and from a low of .0077 that day, the stock went on to hit .0129 yesterday, for a two day swing of 68% The total five-week run we’ve witnessed from February’s swing low amounts to 1190%

Just a quick rundown for those who might not be up to speed on USRM- we initially mentioned it on the morning of February 27th after which we’d watch it run from .014-.0545 (+289%). We then tracked its consolidation down to .0175, and highlighted it again two Wednesday’s ago on the 15th.

On Tuesday, we called USRM a “swing trader’s paradise” as we were updating our readers on its performance, which at that time had shown another 200% jump back to the .05-area. But the party didn’t end there. As of yesterday USRM attained a new high of .07, which equates to an overall run of 400% from our observed low (.014) of less than one month ago.

We’ve been playing SNAP options like a fiddle recently, first with our bearish idea rocketing up over 200% last Friday, and then yesterday with our bullish idea of, the SNAP Weekly $22-23.50 Calls.

We’re going to want to continue watching these SNAP Calls through today’s session, keeping in mind that a break 23.75 would signal the need to roll up our strike price to the $24 level.*
______

*Trading weekly options on a Friday is extremely high-risk, so if you’re not an advanced-level trader, don’t even think about it!

On Wednesday morning, we followed up with USRM after tracking it over a 289% rip subsequent to our alert on the play on February 27th. The stock had come down quite a bit off of those highs, and started to take on the appearance of a possible bottom-play. We mentioned the need to “return to monitoring this play more closely on the chance that it could be gearing up for another run.“

It did find its bottom and it most certainly was gearing up for another run, which took up the entirety of yesterday’s session. The stock traded in a range from .0181 to .03, for a solid intraday rip of 66%, nearly all of which was held into a strong close .0289.

That type of blatantly bullish activity warrants continued close observation of USRM as we close out the week.

Just yesterday, we identified TSLA as being ripe for a recovery, citing the TSLA 04/07 $270-277.50 Calls as our targets of interest. It was another solid options trading idea for us, with every single set of contracts in the range providing opportunities for solid single-session gains.

We also could see more bullish activity out of these plays, which we chose to hopefully take advantage of a more extended-term recovery for TSLA.

We’re  looking to ABDE on the heels of an earnings neat, and will be after some potential quick-strike gains out of the ADBE Weekly $125 and $130 Calls*.

After trending down a bit over the past week, SNAP has received an analyst downgrade, so we’ll want to radar the SNAP Weekly $20 Puts* today for potential intraday swing trades.

*DO NOT trade weekly options on a Friday unless you’re a highly experienced trader!