We rooted out three fresh bottom-bounce plays in yesterday’s premarket report, and got the continuing rebound action we were looking for in all three cases. The performance was enough to keep their spots on our radar for the time being.

Dynavax Technologies Corp. DVAX – To go along with the stock’s rebound (13.13-14.42, +10%), we formulated an options trading idea for the DVAX chain and those plays worked out very well. The DVAX 09/16 $12 and $13 Calls were our target contracts and both offered up the chance at some rapid intraday gains.

ITT Educational Services, Inc. ESI – This one made a good, solid move to reinforce our idea that the stock was due for a nice rally. ESI traded in a range from .30-.48 on the day, representing a shot at single-session gains of up to 60%
______

Eldorado Gold Corp. EGO– This one didn’t make a monstrous move, trading up from a low 3.48-3.71 (+7%), but it did maintain the majority of its advance. Our interest remains as long as the pattern of higher highs and higher lows is sustained.

The bottom-watchlist plays weren’t the only calls from yesterday’s report to go our way. The first in a pair of nice gainers off of our extended watchlist was NAVB. The stock traded up from an early low of .50, and made a 68% move en route to the high at .84.

The stock closed strong, just a few cents below the high at .8047 so we will want to continue monitoring it for signs of continued momentum.

SGBY was the other runner from the watchlist, which included an intraday run from a penny up to .0159, a 59% pop. With a strong close at .0149, this play will remain on our list of interests as well.

We’ve got a trio of potential bottom-plays hitting our scanner this morning, and as our regular readers are surely aware, we’re quite fond of bargain-basement prices. Our history is chock-full of solid recovery based gains.

Eldorado Gold Corp. EGO – This gold play showed up on our radar this morning after Friday saw the stock record a hint of a rise off of its lowest PPS since early April. As you can see on the included snapshot below, the chart is boasting an RSI that appears ready to come off of being oversold, with clear convergence on the MACD hinting at an impending bullish cross. We’ll place this one on watch for upcoming sessions as we kick off this short trading week. 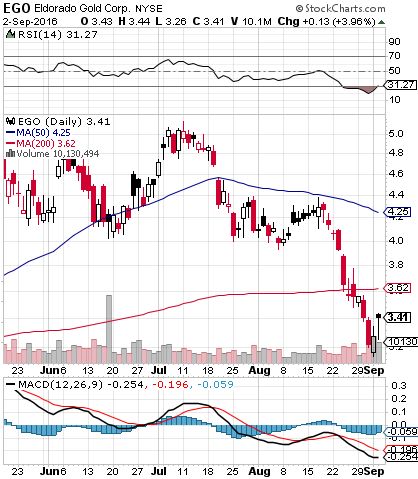 ITT Educational Services, Inc. ESI – This stock showed signs of life on Friday, coming up off of the new 52-week low it registered on Thursday. In addition to being egregiously oversold at this point, there is a monstrous gap on the chart from the low-.70’s on up to the 1.40 range. We’ll be looking for an eventual fill which would of course spell gains approaching 100%

Dynavax Technologies Corp. DVAX – In a moderate morning gap-up, DVAX has already begun to regain some of the ground it lost on Friday following the FDA’s decision to delay its decision on the company’s hepatitis vaccine. No surprise, as the 30% selloff seemed a bit of an overreaction.

We’ll look for the rebound in progress to continue, and will remain interested provided it maintains support above this morning’s premarket low of 12.27. Bonus Options Idea: If the recovery unfolds as we suspect it might, we’ll be anxious to tracj the activity in the DVAX 09/16 $12 and $13 Calls.

We also want to provide a brief update on ASCK, a subpenny play which we placed on watch in Wednesday’s premarket report. After coming down to find support at .0023 the stock ultimately reached a new high of .0065 on Friday.

It marked an intraweek swing of 183% and qualified for a continued spot on our working watchlist.