We’ve been tagging ALPP in our extended watchlist for some time, and as we mentioned in last Thursday’s morning report, we have been on the trail of this stock since November 18th, at which time it was trading as low as .0735.

This week, we’ve continued to follow the incredible rise of ALPP, which soared to a new high of 4.79, marking an unreal upswing of 6417% in the time we’ve been talking about the stock. Even if you had only caught our update on Thursday, you still could have owned ALPP for 2.01/share, and been up as much as 138% at the new high.

Speaking of thousand-percent gainers, we have been following AITX closely since our report just a couple of weeks ago on the 15th. The very next day it saw shares change hands for as little as .002, and we have now witnessed as it ran to a new high of .045. That represents a ten trading day swing of 2150%

As we were just mentioning yesterday morning, OTC plays like these are currently a large part of our successful calls along with plenty of diverse options ideas. It’s also why we implore our readers to add our Extended Watchlists to their own watchlists each morning, as gems like these get unearthed more often than you’d think!

We are currently in an extreme earnings dry spell that figures to last until the week of January 18th, when the calendar begins to get busy again. In the meantime, there are still plenty of potential plays out there, and here’s what we dug up today:

Our first order of business this morning is to update our readers on APRE, which we’ve been following for the better part of a month. In that time the stock has provided us with multiple swing trade opportunities and has been stretching the envelope on its latest upswing. From the .0188 swing-low we observed last Wednesday APRE has rapidly gained 219%, running up to a new high of .0599 yesterday.

We’ve pointed out a few key highlights of the current chart on the following snapshot: 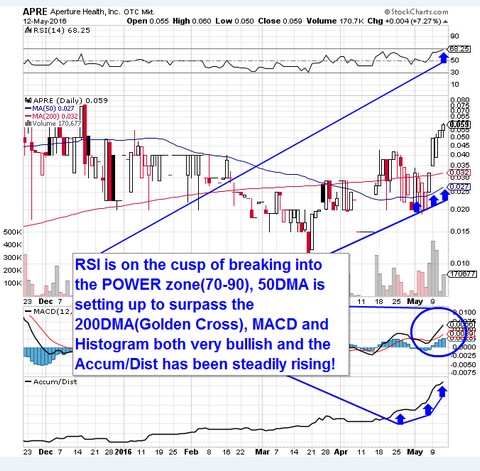 We also want to point out some untraded-upon news that hit the wires yesterday post-market:

Jack in the Box, Inc. JACK – We had a couple of our active options targets turn up sizable opportunities for profits yesterday beginning with JACK 05/20 $70 and $75 Calls. We caught JACK on the heels of its Q2 earnings release, and various circumstances allowed for us to take advantage of the idea on its first day of mentioning.

The $70 Calls traded in an impressive range from a low of 2.25 on up 6.85 for an intraday gain of 204% The $75 Calls fared even better as they ran from .39 to 1.61, a single-session rip of 313% With performances like those, we’ll continue to track these contracts through to their expiration next week.

Just after we were reviewing CBBT’s recent performance in yesterday’s morning report, (We’d added it to our radars last Tuesday) the stock went on to set another new high for us.