Our fresh options idea or the day yesterday on the heels of Facebook’s earnings beat, the FB Weekly $133-136 Calls ended up providing opportunities for sizable gains early on in the session.

The following moves all occurred in the first half hour of trading, so traders would have had to be quick on their feet to get in on the action, but those who were, were handsomely rewarded with some really big, really quick gains:

Amazon.com, Inc. AMZN – With Q4 earnings season in full swing, we will include another options idea based on the early activity in AMZN, which posted disappointing figures in its post-market release yesterday.

Here we’re going to be highlighting a range of puts that we feel stand to make decent gains, should AMZN’s fortunes play out as we suspect they might today. The targets we want to place on watch are going to be the AMZN Weekly $810-800 Puts.

SPDR S&P 500 ETF (SPY) – On the bullish side of things, solid jobs numbers could very well lead to an overall uptrend for the markets as a whole, so we’re going to want to designate an a corresponding idea for that.

Generally, we like to use the SPY as a market analog, so we’re going to signal a range of SPY calls to try to take advantage of the current conditions. Our target range here will be the SPY Weekly $227.50-229 Calls.

We want to keep our eyes on CERU as we close out the week, and into next week, as the stock is currently boasting a chart that looks as if it could break out at any moment.

As you can see, the stock has been gradually building a higher base of support off of annual lows recorded in the fall, and yesterday, really started to make a bullish move. We’re seeing a slight gap-up this morning to just below the resistance channel between 1.20 and 1.30. As we’ve pointed out below, there is a huge gap on the chart to the upside, and a breach of that channel would begin to fill it in.

This is a stock that we feel could easily make a 100% move inside of the next few sessions, so we will want to watch carefully. 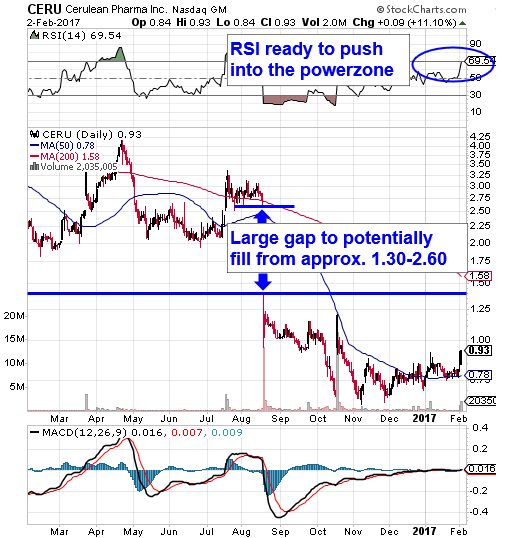 The first thing we want to mention this morning is the performance our running options idea for PLCE that we formulated earlier in the week. We continued to stay on the trail of PLCE Weekly $70-75 Calls in yesterday’s premarket report, even after they had provided us with chances at gains ranging from 112-315% in the prior session.

Despite the $75’s being a bit too far out of the money for any notable action, the other two contracts from within our target sets performed solidly once again.

We tagged IMMU for observation on Friday of last week, and since that time the stock has made an appreciable swing to the upside. Our observed low on the stock is 3.59, which gave way to a new high of 4.25 yesterday. That represents a modest yet notable 18% increase.

We’ll want to continue to monitor the activity in this play which will hold our interest moving forward, provided it can maintain support at or above its previous resistance point of 4.00 on any pullbacks.

GEQU has proven to be a solid winner for us in the past. We recently re-tagged it at a perfect time on 11th of this month, just as it was coming off a bottom. We saw the stock  trading as low as .0123 yesterday it closed at a new high of .03, which goes down as a 144% swing.

We’ll keep our eyes on this one as well, in the event it can maintain support above the 200DMA of .0235.