We’ve got more fresh press releases to relay to our readers this morning on a couple of OTC stocks that we’ve been tracking very closely in recent weeks.

Delta, the prime gold play that we initially highlighted on July 28th continues to see positive signs from their gold projects. The Delta-1 property just produced some very encouraging gold grain counts in a recent survey.

GOLHF remains a nearly-stage gold play with a lot of promise for the future, especially with gold itself performing as it has recently.

KINGSTON, ON / ACCESSWIRE / August 12, 2020 / Delta Resources Limited (“Delta” or “The Company”) (TSXV:DLTA) (OTC PINK:GOLHF) is pleased to announce results from a till sampling orientation survey at the Delta-1 Property, 50 kilometres west of Thunder Bay, Ontario.

Gold grains were recovered from every till sample of the survey with eight samples returning between 41 and 457 gold grains (on a normalized 10kg fraction-size sample). With pristine grains accounting for 78% to 99% of the total gold grains. The pristine character of the gold grains indicates that there has been very little transport and hence these samples are interpreted to be proximal to a bedrock source for the gold. (>>View Full PR)

Also coming with more news today is ADMQ, which reports greatly increased year-over-year revenues for the first half of 2020 in its screen printing division, which recently added sublimation capability.

Our regular readers are more than familiar with SKTO, as our coverage of this stock goes all the way back to last year (We actually caught this when it was trading as low as .0023!), but for the sake of our newest members, allow us to profile SKTO once again, and look into recent developments.

SKTO is, of course, part of the enormously successful marijuana sector, which sprung to life several months ago, leading up to the beginning of legal sales in Colorado. We’ve been heavily tracking this market space all the while, and have been afforded chances at percentage gains totaling in the tens-of-thousands as a result. 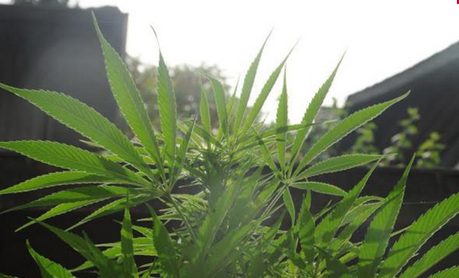 There are several things going on with this stock that make it ripe for the picking, from operating in such a popular sector, to recent alliances, and one heck of a chart setup.

Before we get into that, let’s touch upon the latest news on the cannabis legalization front.  Last Friday, at an appropriations committee hearing, US Attorney General Eric Holder offered this on the legal reclassification of marijuana: “We [the administration] would be more than glad to work with Congress if there is a desire to look at and reexamine how the drug is scheduled”.  There is evidence of a very real desire to do just that, with nearly 20 congressional members already having called upon Obama to take the matter into his own hands. 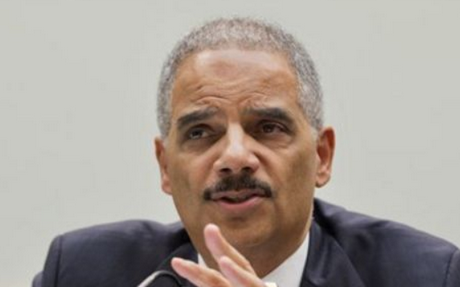 At present, marijuana is actually considered and treated as a Schedule I substance, placing it on par with drugs as dangerous as heroin. Any person with a little common sense and education can tell you that by no means do these two substances belong in the same category.

This comes as the latest in a series of position-softening comments by members of the Obama administration, including the president himself, that signify to us that the groundwork for widespread legalization is already being laid. It’s truly just a matter of time.

This cultural revolution is making it possible for stocks just like SKTO to make small fortunes for quick-witted traders , and one of the things that makes this play exciting is the alliance it has formed with yet another of our favorite past pot plays, AEGY.

Operating as PharmaJanes, AEGY has teamed up with SKTO (operating as Medical Greens) as outlined in a recent PR, with the intent being to “merge the two companies for better market efficiencies and to create a single medical marijuana market support company which can qualify for a higher (AMEX, NASDAQ) market listing.”
If it were just any company involved in such a pact, we might not take it as seriously, but coming from a revenue-producing company like SKTO, it begs our attention. After all, reported gross revenues increased for each of the first three consecutive quarters of 2013, and we wouldn’t be surprised to see that number climb with the upcoming release of 4th quarter financials.  The company recently put in for a late filing, and per that statement, we can expect those numbers to be released by April 15th.

Lastly, we’ll take a look at the SKTO chart, which is looking ripe at the moment.  The stock has begun to bounce, and indicators suggest we could easily pile on further gains from here. 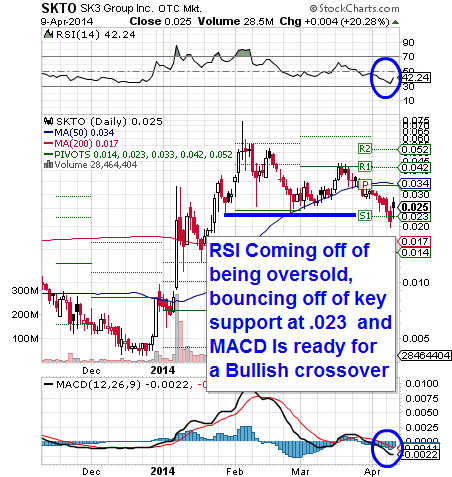 As you can see on the chart, the RSI is rising sharply, and the MACD is exhibiting the beginnings of a bullish pattern. The main area of resistance we are looking at is the 50DMA of .034, and beyond that, recent swing-highs at .042 and .052 and .0735.

If SKTO were to break resistance at its 50DMA, a return to those levels would mean gains from 65-188% over the current price of .0255, so we’ll definitely be watching SKTO closely.

Perhaps some of you were wondering why we went out of our way to re-affirm our interest in pot stocks yesterday. Our latest favorite sector provided a quick answer to that, as the uptrends continued for most of these plays. Once again we remind our readers that this up-and-coming market sector is bound to be one of the biggest stories of the year, and so far there’s no end in sight.

Our coverage of this medical marijuana stock in yesterday’s newsletter came just in the nick of time. The stock had been heating up in the previous session and did not disappoint, touching a low of .0036 before surging to a high of .0065. That marks an intraday gain of 81% on almost a billion shares traded (Roughly 9x the 3mo. average), and was a strong enough performance to land us atop the Penny Stock Rumble, an honor we’re no strangers to receiving: 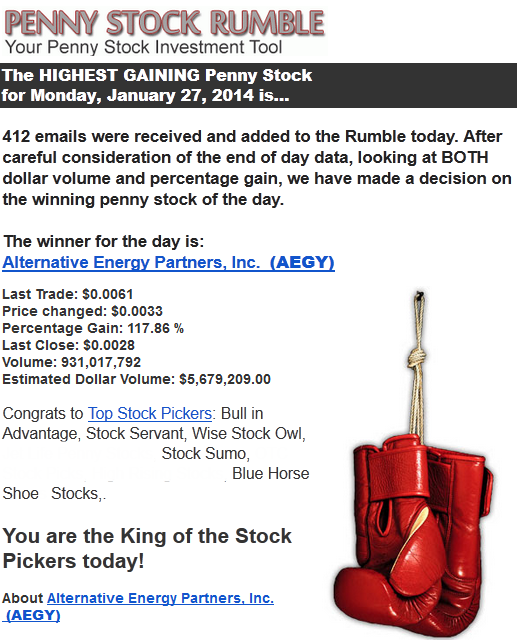 The stock looks like it wants to gap up again this morning, so we;ll be watching AEGY diligently today.

Along with our reminder to continue paying attention to all marijuana-related stocks yesterday, we included a list of several of the more notable candidates, and of that list most of them saw substantial gains.

Those are just a few of the opportunities that were available, as you can see from the following scan of yesterday’s most active OTC stocks. The vast majority were marijuana-related, as the “Green Rush” saw new life breathed into it once again: 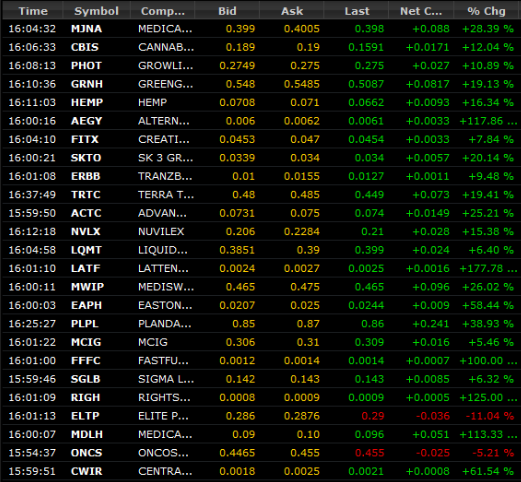 To add a new cannabis play to our spectrum this morning, we are looking at CWIR. We noticed that this stock has been running over the past couple of sessions on greatly increased volume, and is going to be one that we want to follow closely.