We flagged AEZS on Wednesday’s morning, and saw rip its way to nearly a 90% gain. Then yesterday morning, we took note of the heavy volume and kept the stock on our radar.

It didn’t quite match the degree of the previous session’s move, but still followed it up with a solid performance, running from 2.55 to 3.29 on the day. That’s an intraday spike of 29% and a two-day upswing of 122% over our observed low of 1.48,  while volume was massive once again. We’ll be looking for AEZS to possibly continue its multi-day run, and would want to see maintain support at or above Wednesday’s closing price of 2.34 on any pullbacks, in order to remain interested.

We want to radar IMUC as a bottom-watch play this morning. We noticed the stock had fallen to a new annual low yesterday, following the pricing of a public offering earlier this week, that is expected to be executed today.

We’re always on the lookout for battered stocks that could become rebound play candidates, and we’re always looking for charts with gaps to the upside and IMUC currently checks both of those boxes. 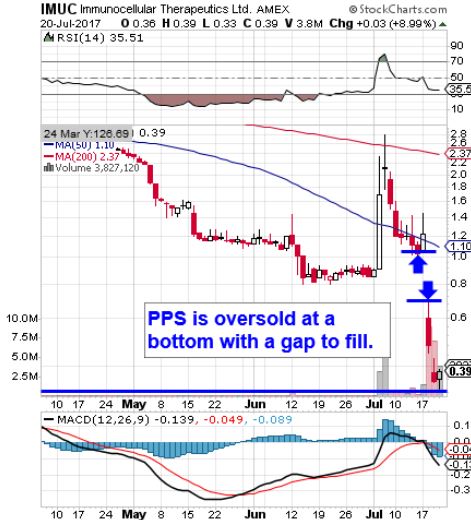 On Friday we noted that ICLD had rebounded off of its 52-week lows, and directed our readers to pay close attention over ensuing sessions, as the volume had really been ramping up significantly.

This was after tagging the play in our extended watchlist on Thursday We watched as the stock traded as low as .0157 that day and began to gain ground. Yesterday ICLD turned in another strong session to start the week, achieving a new high of .0245. That represents a three-session swing of 56% for this play since we’ve been closely tracking it.

We’ll continue to have ICLD on watch as it both breached through, and closed above its 50DMA yesterday, and its strength index is rising rapidly.

Standard & Poors revealed late yesterday, that DISH would be added to the S&P500, and this morning, the stock is gapping up moderately in the premarket to the tune of 5%

We want to be standing at the ready with a solid options play, should the bullish activity carry over into today’s session, so we’re going to identify the DISH Weekly $63-65 Calls as targets for potential intraday/intraweek flip opportunities.

Our readers might have had to do a double-take when we reported our observed range on OWCP leading into yesterday’s session, which was a record-setting 57,956% from the low we saw subsequent to alerting the stock in our premarket report from September 29th (.0036).

We upped the ante even further, stating that “we wouldn’t even be surprised to see our unreal observed range extended even further over coming sessions.”

Sure enough, the stock once again set new highs, trading in a daily range from 2.16 to 3.23 on monstrous volume; good for intraday gains of up to 50% But hold onto your hats, folks, because that new high tabulates to an overall increase of 89,622% in the span of less than four months!

It’s the largest gain of any pick we’ve ever issued, and may hold that record for quite some time, so we just have to give ourselves a huge pat on the back! As to anyone who was along for this ride that had the potential to spawn new millionaires, we salute you as well!

In terms of alerts that originated in 2017, VDRM is one of our top performers. The stock traded with some excellent price action and volatility yesterday after we included it in our morning report.

Far more impressive is the total amount of ground VDRM has covered since our alert on the stock from January 13th, at which time it was trading at a low of .0048. While it’s peanuts compared to the previously mentioned play, in and of itself, a gain of 1254% in less than six weeks is definitely something special!