Pretty much the entirety of 2017 has been some tough sledding for ACTG, which was in an overall downtrend since last winter when it was trading at more than twice its current value.

That all seemed to change around midway through last month, as the stock has managed to establish a good rebound effort for several sessions. In the premarket the stock has broken previous resistance which coincided with the 50DMA (3.63) and could make a move to fill that gao we’ve pointed out on the chart below.

We’ll put the stock on watch in the days and weeks ahead as we kick off this holiday-shortened trading week. 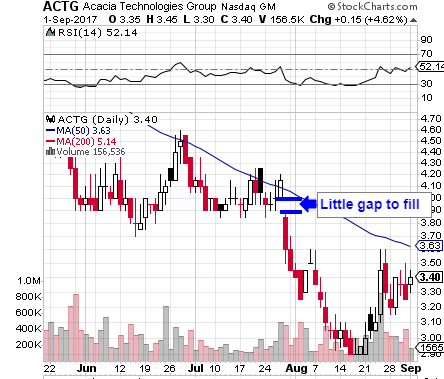 After posting key data reflecting positive top-line results in its Phase III lung disease treatment study, INSM has exploded into the blue sky this morning. The stock has rapidly gained more than twice its value in premarket trading, and whenever we come across a situation like this, we begin to look for the options contracts that could give us the best opportunity for rapid gains.

We think that the INSM 09/15 $27-30 Calls could stand to see some nice activity if the stock continues the blue-sky breakout we’ve witnessed so far.

We placed HGTM on watch for the first time ever in yesterday’s premarket report, and the stock gave a heck of a solid performance, immediately serving up chances at some respectable single-session gains.

The stock traded in a range from 2.85 up to 4.90 which works out to an intraday spike of 72% It did pull back considerably into the close, but we’re definitely going to let it remain on our watchlist for the time being, as it managed to trade roughly 45X its monthly average volume.

Prior to yesterday’s report, the last time we had mentioned DOLV was back in 2015, so it might as well have been new.

It too made a respectable intraday run as it traded up from a low of .0056 and reached a subsequent high of .00975. That worked out to a 74% intraday pop, although it didn’t occur on much more than the 30-day average volume.

This is a play we’ve been tracking pretty closely since the end of 2016, with our observed low on the stock coming in at .001 (Feb.16th).

Most recently we re-tagged it in Wednesday’s premarket report, and from a low of .0077 that day, the stock went on to hit .0129 yesterday, for a two day swing of 68% The total five-week run we’ve witnessed from February’s swing low amounts to 1190%

Just a quick rundown for those who might not be up to speed on USRM- we initially mentioned it on the morning of February 27th after which we’d watch it run from .014-.0545 (+289%). We then tracked its consolidation down to .0175, and highlighted it again two Wednesday’s ago on the 15th.

On Tuesday, we called USRM a “swing trader’s paradise” as we were updating our readers on its performance, which at that time had shown another 200% jump back to the .05-area. But the party didn’t end there. As of yesterday USRM attained a new high of .07, which equates to an overall run of 400% from our observed low (.014) of less than one month ago.

We’ve been playing SNAP options like a fiddle recently, first with our bearish idea rocketing up over 200% last Friday, and then yesterday with our bullish idea of, the SNAP Weekly $22-23.50 Calls.

We’re going to want to continue watching these SNAP Calls through today’s session, keeping in mind that a break 23.75 would signal the need to roll up our strike price to the $24 level.*
______

*Trading weekly options on a Friday is extremely high-risk, so if you’re not an advanced-level trader, don’t even think about it!

We’ve been tracking AUPH in the roughly seven weeks since our mention of it on January 27th, and for a stock that started out at lows of 2.95 subsequent to that report, it sure has been quite a ride.

We followed it all the way to a high of 10.54 last week, which was an increase of 257% over our observed low. As is expected when a stock sees such a sharp rise in such a short period, AUPH did begin to consolidate, but that was only in preparation of another nice swing. From 7.51, where it ultimately found support, AUPH went on to reach 9.83 yesterday, which marks a 31% upswing on the rebound.

It’s the volatility in AUPH, which has been terrific for a stock in its price range, that makes it such an interesting stock to watch, and we’ll continue to have it on our radars moving forward.

Fresh Options Ideas  – We’ve got a trio of options ideas this morning that are earnings-related. Solid earnings generally give stocks a sizable enough boost to provide great opportunities in the options chain. It’s a phenomenon we’ve observed time and time again, so here’s what’s hitting our scanner this time:

FedEx Corp. FDX- While FDX didn’t meet the expectations of Wall Street on its earnings yesterday post-market, very optimistic guidance from the CEO in which he stated “margins, cash flows and returns are going to increase over the next several years” has the stock gapping up this morning to the tune of 5% We’re going to be standing at the ready with the FDX Weekly $192.50-200 Calls to try to take advantage of the immediate reaction.
_____

Petroleo Brasiliero S.A. (Petrobras) PBR – We’ve had a ton of success with trading PBR options in the past, and are going to revisitWe are going to signal a range of short and longer-term options for PBR, which had a whirlwind release yesterday post-market in which it revealed a profit for 2016 and a cut to debt levels, which also helped to earn it an analyst upgrade from Credit Suisse Group AG. We’ll be looking at the PBR Weekly $9 Calls, as well as the PBR 04/21 $9.50-10.00 Calls.
_____

Dollar Tree, Inc. DLTR – Dollar Tree held its earnings call last week, so the reaction isn’t as fresh, but we’re more interested in what this one is going to do over a more extended period. They reported net sales increases of 5% year-over-year, while diluted earnings-per-share spiked over 40% year-over-year. We also like the look of the chart from a technical perspective, currently at a double-bottom on the chart and looking like it’s ripe for a recovery. We’re going to zero in on the DLTR 04/21 $78-80 Calls.