TGRO continued to push itself to new highs on Tuesday, as the stock we’ve followed from a low of .36 (12/09) reached 1.47, extending our total possible gain in just a few weeks to 308%

We’ve obviously been extremely pleased with the performance of this pick, but as is the case with any stock that sees gains this large is so small a time-frame, it is by this point that one usually considers taking profits.

For more adventurous folks who might want to leave something on the table, we would suggest the possibility of using a stop-loss, in this case, the bottom of the previous session’s candle at 1.00.

GOGO began to rebound on Tuesday after a recent consolidation, holding support and bouncing off of the 50DMA. Many of you will recall our coverage of this popular tech play dating back to September 16th, when we caught it as low as 14.79. It went on to hit a high of 35.77, gaining 142% before the subsequent pullback we just mentioned occurred.

We want to keep an eye on GOGO, now that it has bounced off the $23-range, and is making its way back up, with pre-market trades currently going off above $26.

As far as options trading ideas for GOGO, we are interested in the January or February $30 Calls. For example, the February Calls previously closed at 1.70. If GOGO returned to $36 by 02/22 , those contracts could be trading in the $6 area, which would be good for more than a 250% gain from current levels. .

Extended Watchlist Winners
As is usually the case, we had a few picks from off of our extended watchlist that presented opportunities on Tuesday.

Note: IMUC appears ready to continue its run today, gapping up in pre-market trading. Stay on top of this one, as several key chart indicators are beginning to look favorable. The RSI is starting to come off of being heavily oversold, and the MACD appears ready for a turnaround. As we’ve pointed out below, there is a large gap on the chart, the filling of which would spell significant gains providing it can break through the 1.20-range. We’ll be certain to have this one on our radars in the days and weeks to come. 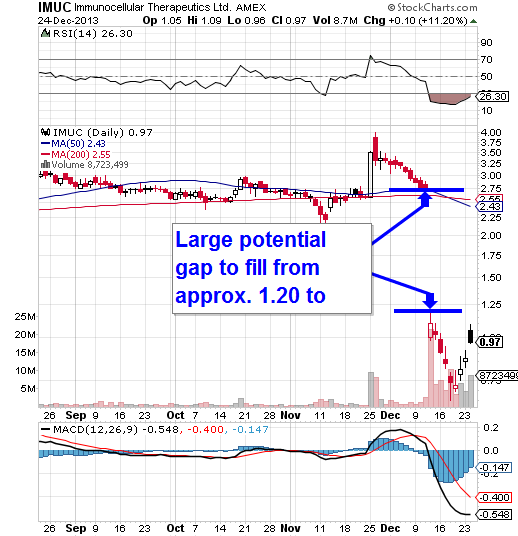 Before we break for tomorrow’s market closure, we’d like to take this opportunity to extend our warmest season’s greetings to our treasured audience, you! Happy holidays to all of our friends around the world! Whatever your personal beliefs may be, however you choose to celebrate tomorrow’s off-day, we hope you have a safe and wonderful time. We’ll see you all bright and early on Thursday morning!

TGRO continued to blossom yesterday, attaining a new high, as it traded from a low of .96 into a strong close at the high-of-day of 1.25, and doing so on over 3X its 3mo. average volume. That was good for a solid 30% intraday rip, and at the 1.25-level a gain of 247% from our original alert at .36 (Dec. 9th) was possible. Congrats to anyone who’s been able to clean up here, as there has been ample opportunity for all.

The stock continues to achieve higher highs and higher lows, always a favorable sign concerning its chances to continue trending up moving forward. We’ll be interested to monitor its activity both before and after the holiday hiatus.

Yesterday, once again, TGRO made us the champions of the Penny Stock Rumble, sweeping both categories: Percentage gain, and dollar volume! 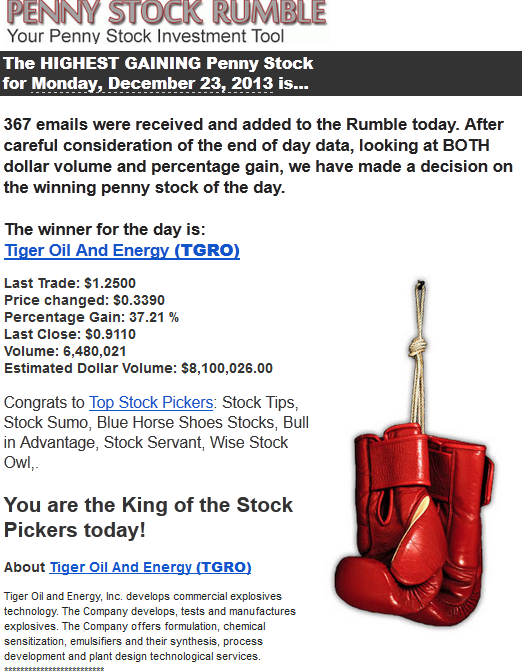 Like TGRO, PROW also managed to achieve higher highs and higher lows on Monday, affording it our close attention. After delivering us a 51% possible gain on Friday, it continued its run, opening at .009 and peaking at a high of .013.

That gave us another opportunity to profit, this time to the tune of 44% on thrice the average volume. That brings our two-day cumulative gain total on PROW up to a very respectable 95%