APP has continued to please us with its performance at every turn since we brought it back to our reports on Tuesday of last week at a low of .47.

So, in only eight sessions since we turned our attention back to APP, it has achieved an overall increase of as much as 74% (.47-.8157). Cheers go out to anyone who pounced on the opportunities provided by APP this week.

For over a year we’ve been tracking BLDP, and have seen some impressive trading action in that time. The stock traveled from under 1.30 toward the end of 2013, and ran as high as 8.38 in March.

After a consolidation period, wherein the stock has come down to find support at 3.41, we are beginning to like the lok of the chart once again.

Yesterday’s high of 4.13 was just shy of the 50DMA (4.14), and BLDP is now trading above the 50DMA in the pre-market. Additionally, the MACD indicator is presently coverging toward a bullish cross. 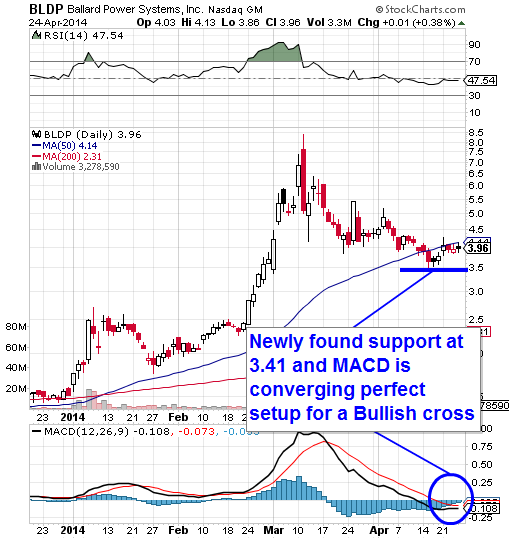