LEXG came out a winner once again yesterday, even as we were mentioning how many quality opportunities the stock has brought us in the past, in our morning report.

That’s small potatoes, however, compared to the overall move we’ve witnessed since our alert during the week between Christmas and the New Year. At that time the stock saw a low of .0013, which means we’ve seen a monstrous run of 862% out of LEXG in just over three weeks’ time!

We’re looking at OPK as a potential bottom-play today from a technical perspective, after noticing several attractive features on the chart.

As you can see from the included snapshot, the chart is currently boasting an enormous gap to the upside, with a recent track record of making volatile swings and gap-fills. Not to mention an oversold indication from the RSI and a rapidly ripening MACD.

Additionally, we’ve got a Form-4 alert for OPK; the CEO picked up a sizable tranche of shares near yesterday’s lows (>>View Filing)

We’re going to want to keep this one on our radar for a possible rebound in the days and weeks ahead. 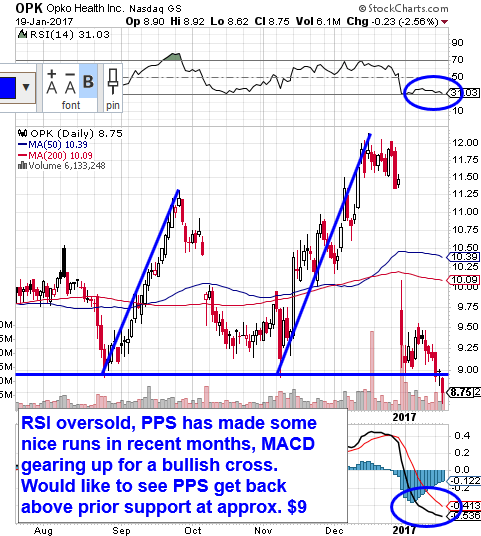 We’ve been tracking the activity in LEXG for quite a time, and the volatility and price action in this play has provided for us on more than one occasion.

Yesterday was yet another of those occasions, with the stock putting in a solid performance. LEXG traded in a range from .0036-.0045, an intraday move of 25% which came on a little over thrice the monthly average volume.

The moves we’ve seen since putting LEXG on watch in December have been significantly more impressive as well. We saw a low of .0013 around the holidays, putting our overall observed increase in just over three weeks at 246%

We’ve been so wrapped up in tracking various stocks over the first couple weeks of 2017, that the following will be our first options ideas of the year!

Netflix, Inc. NFLX –  NFLX has been generally trending upward for around two months, hitting new all-time highs this week. Yesterday’s earnings and updates, including the fact that the streaming giant had added a record 7 million new subscribers over the last quarter.

We want to potentially take advantage of a continued run, even if its preceded by a dip-and-rip pattern. As long as it holds support above the $139 mark, we’re going to interested in tracking the NFLX Weekly  $139-143 Calls.

Tesla Motors, Inc. TSLA – TSLA is another big board stock that has been on a bullish tear of late. The stock has been stacking gains on top of gains over the past 6 weeks.

This morning, it received an upgrade from Morgan Stanley, and we’ll hope to use that added attention to see some more good moves in the stock. Accordingly, we’ll have the TSLA Weekly $240-245 Calls on watch today and tomorrow.

Even during a time of relatively high uncertainty for the markets at large, and on a short trading week, which are often more subdued than a typical week, we still managed to suss out a wide range of interesting plays in yesterday’s premarket report. Therefore, the bulk of today’s offering will be comprised of performance updates.

VDRM turned out to be the crown jewel of yesterday’s report, undergoing a massive intraday run that offered up chances at huge single session gains. We initially tagged the stock before adjourning for the holiday weekend on Friday morning. and it responded with a pop from .0048 to .0087 (+81%).

We kept it in yesterday’s report, and that’s when it really kicked into high gear, trading in a range from .00845 to an incredible new high of .0242. That worked out to a single-session romp of 186% and extended our observed gains over a two-session swing from Friday to 404%

Congrats to any of our readers who were able to hitch a ride on this wild breakout!

As we reminded readers yesterday, MCIG was among those stocks we mentioned in our first report of 2017, subsequent to which, we would observe a low of .1599.  We then saw two weeks of a notable uptrend which brought us to yesterday’s session.

Despite already having attained a new all-time high on Friday, MCIG kept the train rolling with a solid intraday performance leading to another new high. The stock traded in a range from .388 on up to .505, a 30% push which occurred on roughly 5x the monthly average volume.

The bullish move extended our overall observed range on MCIG in just over two weeks to a whopping 216%  Any further moves from here would just be icing on the cake, but we’ll want to leave MCIG on our radar screens because a dip-and-rip pattern could be forthcoming before the week is through.

The posting of a Form-4 filing last week, along with its positioning on the chart is what led us to focus upon RVP as a “prime bottom-play” in yesterday’s premarket report.

We were correct in doing so, timing the bottom precisely as RVP went on to rebound, trading in a range from .94 to 1.16. While that works out to a modest increase of just 23%, RVP did close just slightly below that high of day, and this morning has reached as high as 1.18. We’ll be very interest to continue tracking its activity, looking for the recording of higher highs and higher lows en route to a sustained uptrend.

Also appearing in yesterday’s newsletter was PSNX, a subpenny play which also enjoyed a sizable PPS increase on heavy volume.

The stock traded in a range from  .00239 to .0035, an intraday gain of 46%, with more than 11x the monthly average volume of shares changing hands. The price tapered slightly into a close at .0028, but provided the stock maintains support above yesterday’s swing low, we’ll remain interested in PSNX.

We also want to quickly point out what may very well be another prime bottom-play setup for DCTH. We’ve annotated the chart snapshot below to illustrate why we’ll be tracking this one as well as we head through midweek. 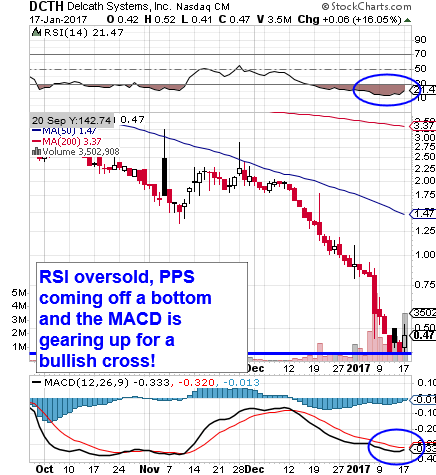