We’ve been tracking the activity in LEXG for quite a time, and the volatility and price action in this play has provided for us on more than one occasion.

Yesterday was yet another of those occasions, with the stock putting in a solid performance. LEXG traded in a range from .0036-.0045, an intraday move of 25% which came on a little over thrice the monthly average volume.

The moves we’ve seen since putting LEXG on watch in December have been significantly more impressive as well. We saw a low of .0013 around the holidays, putting our overall observed increase in just over three weeks at 246%

We’ve been so wrapped up in tracking various stocks over the first couple weeks of 2017, that the following will be our first options ideas of the year!

Netflix, Inc. NFLX –  NFLX has been generally trending upward for around two months, hitting new all-time highs this week. Yesterday’s earnings and updates, including the fact that the streaming giant had added a record 7 million new subscribers over the last quarter.

We want to potentially take advantage of a continued run, even if its preceded by a dip-and-rip pattern. As long as it holds support above the $139 mark, we’re going to interested in tracking the NFLX Weekly  $139-143 Calls.

Tesla Motors, Inc. TSLA – TSLA is another big board stock that has been on a bullish tear of late. The stock has been stacking gains on top of gains over the past 6 weeks.

This morning, it received an upgrade from Morgan Stanley, and we’ll hope to use that added attention to see some more good moves in the stock. Accordingly, we’ll have the TSLA Weekly $240-245 Calls on watch today and tomorrow.

We caught sight of a stock that’s been building a cherry of a chart in the form of a nice bottom-bounce, the momentum from which it has sustained over the past four sessions.

We went ahead and pointed out a few highlights on the chart below. Despite already being up considerably above recent lows, a number of indicators still give us a bullish feeling on EGLE at the moment. We’ll be looking for a break of key resistance at the current 50DMA of .83. As you can see, the stock has demonstrated high month-to-month volatility, and recently made a brief but impressive swing into the three-dollar range.

We’ll keep the play on our radar in coming sessions as a return to much higher levels seems perfectly plausible at the present time. 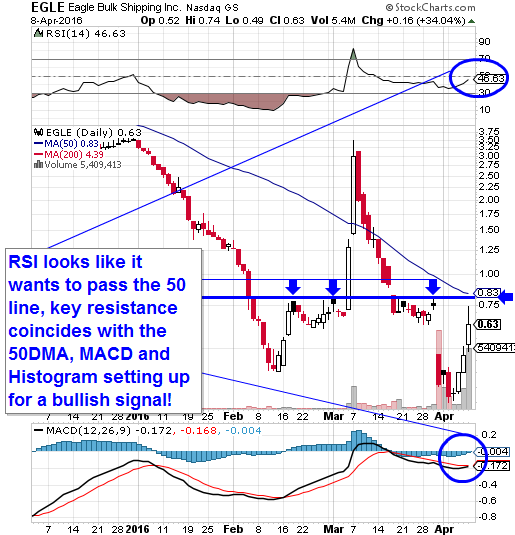 Before we jump into the fresh ideas we’ve worked out for today, we just want to take a second to go over the gains possible from one of Friday’s options calls. We said we wanted to track the PBR Weekly $5-6 Calls, and it was the 5.50’s that performed the best for the day.

We saw those contracts trade up from a low of .18 and reach .32 for a solid chance at up to 78% profits for the session.

We also want to recap the excellent performance we’ve seen from SFOR in the seven sessions since our initial alert on the stock in our premarket report from March 31st. On that day, we witnessed a low of .0007, and the stock hasn’t looked back yet.

We wanted to circle back to touch upon an update for the VRX 04/22 $32 Calls we initially slated for observation on Tuesday.  VRX trading activity allowed for us to witness a run from 2.90-3.90 that day, for possible gains of up to 35%

We stated as much in yesterday’s morning report, with the added reminder that we felt certain the scope of those gains would increase, and we were spot-on once again.

For the day we observed a move from 4.25-5.25, a relatively modest 24%, however as measured from the low we saw on Tuesday morning, it marked a two-day swing of 81%, so cheers to those of our readers who were following along with us on this play!

Up until yesterday’s session, TSLA had been enjoying an epic rally which began in early February, however, that began to fizzle out over the past couple of days. The stock now appears very top-heavy, and that was confirmed by a fall below its 200DMA yesterday.

In the event that this is a protracted backsliding event, we’re going to want to be ready with a corresponding options trading idea.  We’re going to zero in on contracts in the range of TSLA March 24th $220-215 Puts, which qualify as Weekly contracts*, as the markets are closed tomorrow.

*Please remember, trading weekly options contracts on a Friday is an extreme high risk/high reward proposition, and is recommended for highly experienced traders only.

CPXX was a point of focus for us last Wednesday, when we caught a hot PR hitting the wires, and despite the stock already being up considerably at that point, we were able to glean a healthy 41% gain out of the stock that first day (from a low of 6.44).

As we’ve kept observing the play over the course of the week, we’ve seen a continual stream of higher highs and higher lows, which culminated in a new high of 12.64 yesterday. In exactly one week’s time, we saw CPXX make an overall swing totaling 96%

We also want to give ourselves a quick pat on the back for calling GBSN to our readers attention via our extended watchlist yesterday. The stock was experiencing highly abnormal activity due to some FDA News and despite gapping up to the extreme, we still saw a dip-and-rip which carried the stock on an intraday run from .222-.29, a 31% swing.