We’ve been hot on the trail of GILD Calls since Wednesday, when we brought forth the idea of using the $97 and $98 Calls to take advantage of GILD recovery from a beating it had taken following a mixed-result earnings call. Both sets of contracts brought us the chance to make major gains that day, with the 97’s and 98’s making moves of 226% and 253% respectively.

We reaffirmed our interest in those same calls in yesterday’s premarket report, and for the second day in a row, we were extremely pleased with the intraday opportunities afforded to us.

Cheers go out to anyone else who was able to take advantage of our meticulous coverage of this excellent play this mid-week. It’s just the latest in a long line of great options trading ideas we’ve had so far in 2015, so even if you’ve missed everything up to this point, you’re not too late, because we have no intention of slowing down now!

Twitter had an earnings beat post-market yesterday, and as a result the stock is gapping up significantly this morning. Our next potential area of interest is going to be with the TWTR $45 Calls. (Last Traded @ 1.00)

In addition to yesterday’s successful options plays was a stock we also mentioned in our morning report that went on to behave exactly as we predicted.

After making a huge run that topped 1700% the day prior, we mentioned our expectation that RCHA would pull back off of its extreme highs and offer us a subsequent bounceplay, and indeed it did.

Our interest in the GILD $97 and $98 Calls which we featured in yesterday’s morning report paid off big-time for us. With GILD breaking the $100-mark, those contracts provided us with ample opportunity to profit. 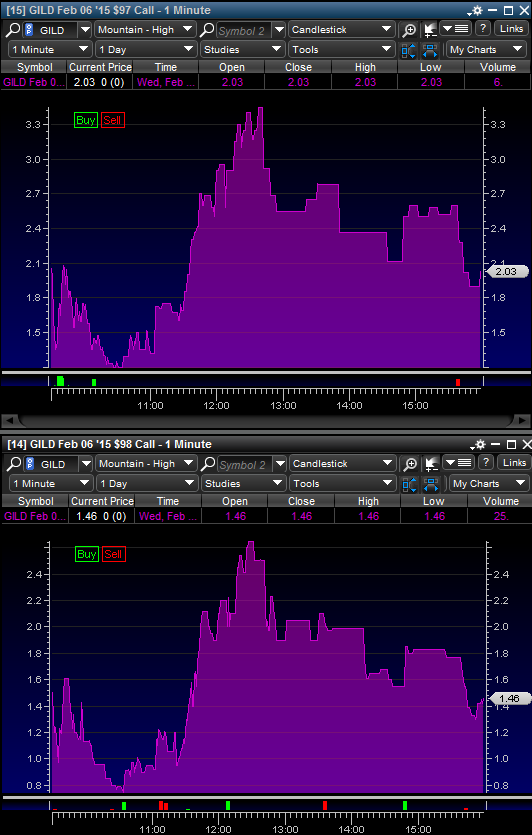 GILD will keep our attention as we head into week’s end, we’ll continue to monitor these $97-98 Weeklies, and should it appear that the stock wants to surge higher we may consider rolling up our strike price to the $99-100 Calls.

For the second day in a row yesterday, the importance of checking our blog daily stood out with another stock off of our Stock Tracker making huge gains. RCHA went on a historical run from super-subpenny (.0009) to .0163, an intraday gain of more than 1700%

We were also talking about RCHA in both our Premium and Free Skype chatrooms*, where members could have gotten in as low as .0019. Plenty of time to attain gains on the order of several hundred percent, as you can see from the following snap of the daily chart on this beast of a play, and the message from the chatroom at 9:53am. 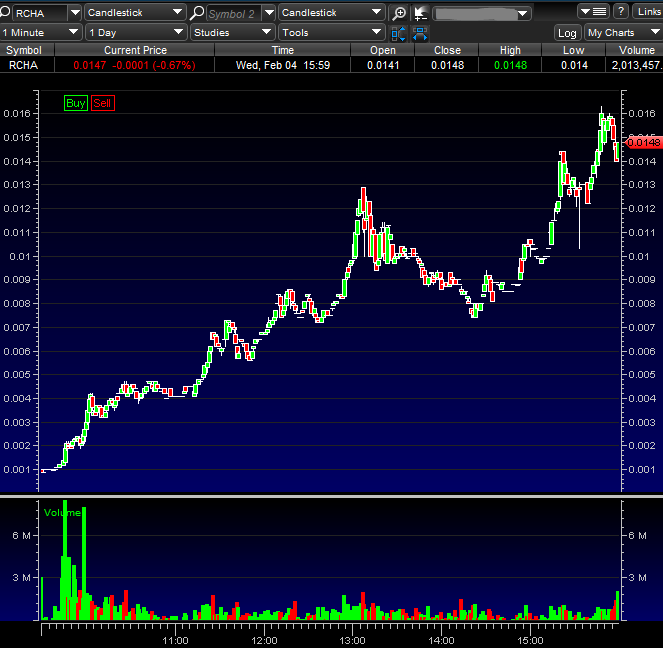 Today, we would expect to see a gap-up followed by a significant dip as profit-takers exit their positions. From there, if properly timed, we could be looking at a big bounceplay, so we’ll want to keep RCHA on watch for at least the remainder of the week.

*Any readers who’d like to be involved in these trading chats in the future can do so easily! For either the Premium or the free chats, simply add “stocksumo” as a contact on Skype to request access!

We see potential opportunities in the options arena this mid-week, from a couple of stocks that we’re catching on the heels of their earnings calls. Despite earnings beats for both, each stock has actually fallen.

Gilead Sciences, Inc. GILD – Despite exceptional 2014 earnings, investors read between the lines on a number of other key aspects following last nights call, and as a result the stock is taking a bit of a beating. This morning’s premarket low stands at 90.60. That will be the price-point we’ll need to monitor to determine an options trading strategy. Should GILD sustain a recovery off of these lows, we’ll be looking at in-the-money Calls, most likely at the $97 and $98 levels. In the event that the stock begins to find new lows we’d need to flip our strategy to Put side of the fence.

Chipotle Mexican Grill, Inc. CMG – Here we have a similar situation, with CMG taking a beating in today’s premarket, having hit a low of $675. Like GILD, earnings expectations were exceeded, however shortcomings in sales and other key metrics has momentarily taken the wind out of CMG’s sails. This is another situation where we need to monitor the stock to ensure it doesn’t fall below the premarket low in order to secure our interest in playing the Calls. We’d obviously need to look at Puts if CMG were to backslide any further, but barring that occurrence, were going to be looking at Calls in the $675-$680 range.

NRTI serves as a reminder of why it’s always a good idea to check our blog at Blue Horseshoe Stocks each morning even if you’ve consumed our report via email or elsewhere. The contents of our daily-updated Stock Tracker may or may not be included in that day’s report, and often those stocks we add at the last minute go on to provide big opportunities.

That was the case with NRTI yesterday; we placed it on the tracklist just minutes prior to the opening bell, and the stock made one heck of a move. From a low of .0115, it went on to touch a daily high of .02, marking a healthy intraday move of 74% on just over three times the 30-day average volume.