We’ve been going heavy on our options tracking this week, and have unearthed some real gems as usual. To close things out today, we’ll identify a couple of things to watch for once action commences.

Apple, Inc. AAPL – To reiterate our AAPL idea, we were tracking the stock and observing for a bottom early this week, which it found Wednesday. It led to some impressive gains in the Weekly $115 Calls, and those are the contracts that we’ll watch for added activity. *Remember: Trading in options with a weekly expiration on a Friday carries an elevated risk/reward dynamic.
___

FitBit, Inc. FIT – We’ve witnessed gains approaching the 100%-mark from Weekly FIT Calls in prior sessions, but today we’re going to enter a longer-term idea into the log for extended observation. We’re interested in the FIT September 18th $64 Calls. 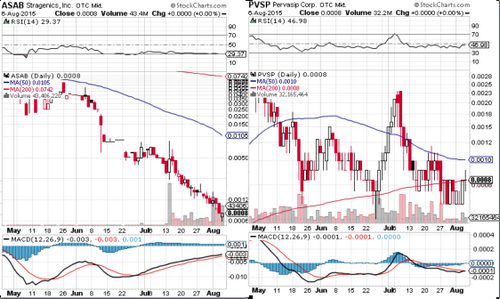 As you can see from the side-by-side snapshot below, each of these .0008-stocks appear ready to rebound off of their recent relative bottoms, and we’ll want to be paying close attention when they do. Especially in the case of PVSP; a play that we tracked over a monster run from late-June, early-July.

We’ve been familiar with this stock since back when it was still trading as Tranzbyte Corp., although 2015 has been a near-constant downslide for the stock. One look at the chart and it’s self-evident. 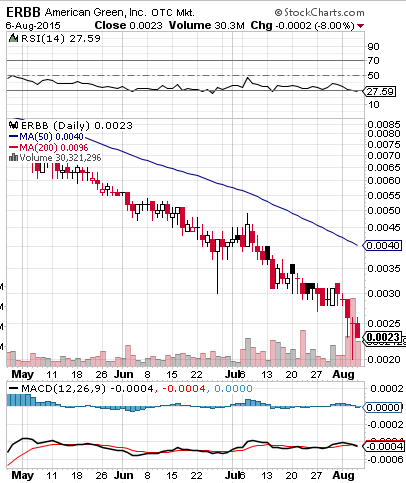 It did however, respond to the logging of a new 52-week low on Wednesday with a higher low for yesterday’s session, so we’ll want to see if it can continue to establish a higher base of support. A rebound could be forthcoming at any time, so we’ll re-submit this to our running watchlist.

Today we are celebrating the 4th anniversary of Blue Horseshoe Stocks. It’s been a great ride so far, and we can’t wait for all the great things the future holds! Our thanks go out to our many valued subscribers and readers from around the globe for your continued support! Without you we’d have no reason to do what we do, so, Happy Birthday to the entire Blue Horseshoe Stocks community, one and all!

To kick the week off on Monday morning, we highlighted a couple of fresh news bottom plays, and MIXX was among them. If you refer to that premarket report, we stated that MIXX was  “piquing our interest with a premarket PR and its positioning on the chart as a good bottom-watch candidate. The stock has fallen dramatically to new 52-week lows, and is looking extremely oversold… we’re going to slate this one for observation as the potential recovery could produce some serious chances for profit.”

We honestly couldn’t have been more right about MIXX seeming out of place at such low price, and that impression of the chart led us to the chance for some serious profits. Yesterday’s trading range brought the stock from a low of .98 all the way up to 3.15, which marks an intraday jump of 221%

This play served as yet another added reminder of why we are constantly scanning for stocks which have been crushed down to new annual lows without significant material changes. It is often a precursor to hefty rebounds like the one MIXX has produced this week.

Speaking of intraweek swings, MBHC has continued to make a comparatively modest yet still significant move of its own off of its recent swing low of .0042. Yesterday the stock pushed its way back to a high of .0069, an overall positive change of 64%

It came in conjunction with a press announcement highlighting the appointment of a new CEO who will be navigating the company through the upcoming launch of the company’s new app to both Apple and Android markets. The timeline given in a prior press release from MBHC has the official release coming up later this month.

We’ve had strikingly good fortune with options recently, so here are a couple of fresh ideas that we’re going to be monitoring today. We’re going to give a wide target range for each of them. Be aware that when we signal wider ranges of call contracts it’s always less risky to start at the lower strike price, (i.e. deeper in-the-money) and roll up our strike price if the stock looks like it wants to continue to break out. We’ve identified many winning contracts in the past using this broad-sweep monitoring method.

In yesterday’s follow-up report, we highlighted a couple of key points regarding what we wanted to have happen on the chart- namely the holding of support at or above the 50DMA of .004, and a break through established resistance at .006. Both of those goals were met during the session, with MBHC trading in a daily range from .0053-.008.

We’ve drawn up the current chart outlook on the following snapshot: 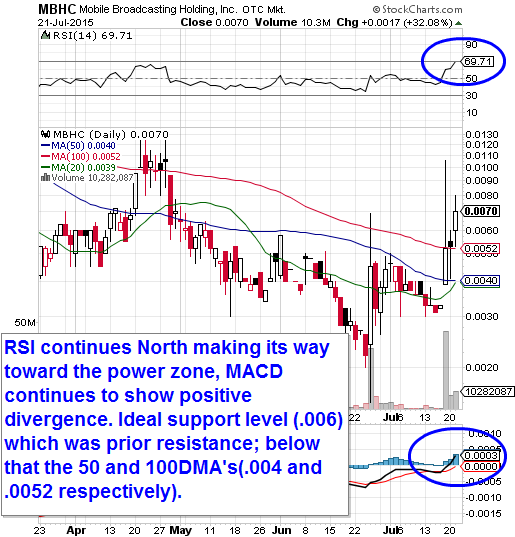 The company is already reporting high levels of user engagement with regard to the global deal they signed with Twitter, announced this past Friday. So much so, that yesterday they released an update that hit the wires just after we published our morning reports.

Two of the winners off of yesterday’s potential bottom-play watchlist seem to have been aided by PR’s, and the fortuitous timing of our alerts on all three spelled the chance at some nice profits for our subscribers.

Windstream Technologies, Inc. WSTI – After releasing a Letter To Shareholders addressing recent price action and other perceived issues, the stock saw a nice rebound. It traded mostly sideways for the majority of the session, seeing a low of .0085, before ripping into the close, hitting a high of .015.

That worked out to an intraday move of 76% and it occurred on more than triple the 3-month average volume. With such a significant reactionary run, we’re going to stay aware of the possibility of that momentum leading to a profit-taking-pullback and subsequent bounce.

Cafe Serendipity Holdings, Inc. CAFS – Some Recreational Marijuana News helped bolster CAFS’s position on the chart as the stock ran from .006-.0085, a 42% pop.  It did so on volume that, while exceeding the monthly average, was relatively light in and of itself. A more pronounced surge in buying pressure could create some interest results, so we’ll keep an eye peeled for that possibility.

Stragenics, Inc. ASAB – There was no PR to aid our bottom-call of ASAB, it was simply a well-timed mention. The stock traded from a low of .002 and ran as high as .0027 inside of the first couple hours of trading. That was good for a solid 35% intraday jump.