We were exceptionally pleased with the performance of GIGL after including it in Friday’s premarket report, and our timing really couldn’t have been any better. The stock had been trading sideways for months, without so much as a spike, yet it still broke out for a monstrous single-session move.

GIGL traded up from an early low of .0053, smashed through the penny barrier, and hurtled its way to an impressive high of .024. That worked out to an intraday push of 353% and it came on record volume.

For those reasons, we’ll certainly be ready to continue monitoring the activity in this play. We’ll of course allow for the possibility of some course correction, but the odds of seeing either a continued increase, or a dip-and-rip scenario, seem reasonably high at this point.

We also got a pretty good performance out of LIGA, which was another inclusion from Friday’s report. The move didn’t quite rise to the magnitude of the aforementioned stock, it did attain double-bagger status with a significant gain opportunity.

From a low of .001, we watched as LIGA shot to a high of .0022 inside of the first two hours of trading. That was good for quick gains of up to 120%    Perhaps just as importantly, the stock maintained more than half of its daily advance, so we’ll be keeping an eye peeled in sessions to come.

We also want to draw attention to MACK this morning, a stock that we haven’t visited in quite some time. Following the establishment of a new 52-week (and indeed, a three year) low on Friday, a bombshell development hit wires this morning and is really causing a stir.

PPS has increased considerably in premarket trading as the company announced that it has sold a pancreatic cancer drug, among other assets, for a cool billion dollars. (>>View PR)

Whenever a major catalytic event such as this transpires, we always like to monitor the situation on the tail end. Hypothetically, a return to its pricing from around this time last year, from this point, would carry a gain of around 100%

We’ve got MACK, a play that has been on our watchlist before, bringing itself to the forefront today as news about a licensing agreement has the stock gapping up to the tune of 20% in the premarket. We’re going to be interested to see how it comes out of the gate this morning in response to the announcement.

Another gapper, RITT is also up significantly in premarket trading this morning. The stock had a strong session yesterday, trading in a range from 1.28 – 1.97 on exceedingly heavy volume; more than ten times the monthly average, so we are looking at it for potential momentum carryover into today.

Given the nature of the yesterday’s activity, we could also be looking at a possible dip-and-rip scenario as inevitable profit-taking pares back the share price.

BIGG was actually passed along to us awhile back by one of our subscribers. (Readers should feel encouraged to share any ideas you might have with us!) Since then we’ve had the stock on the back burner, passively following along until it was ripe for the picking. We began to see some positive movement off of the bottom yesterday, so we think now could be a good time to flag this play for more intensive monitoring.

GTLS was the subject of a buyout rumor yesterday, which effected some upwad movement in the stock. As a result we just want to radar the October $65 Calls, which last traded at 1.50.

After undergoing consolidation in recent sessions, GBGM has made its way down to find support at .0012, where it has begun to bounce.

This is a stock that was trading over half a penny as recently as late March, so we’ll want to stay open to the possibility that a bounceback from these low levels could produce notable gains.

The RSI is currently looking extremely oversold, while accumulation and distribution is on a steady upswing, so we believe that monitoring this play for a possible recovery could yield results in upcoming sessions. 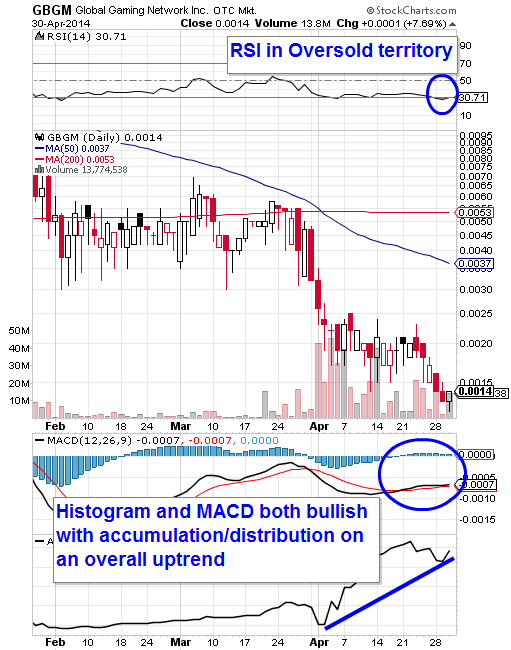 Today, following the stock’s first green candle in six trading days, we’ll be on the lookout for GBGM to make higher lows and higher highs, which would confirm that it has begun to trend off of its bottom.

The following stocks have news out this morning, that we felt was worthy of passing along:

We’ve highlighted MACK in the past, and were pleased to see that company has come out with news today outlining the positive clinical progress of its pancreatic cancer treatment trials, as well as releasing its Q1 financials, and filing an 8-K. We’ll provide links to all of these developments here:

In addition to this morning’s news, FLST boasts a tight share structure (updated recently), and is currently trading near a bottom on on the chart. A turnaround from here could get really interesting, so we’ll be anxious to see how this play responds in coming sessions. 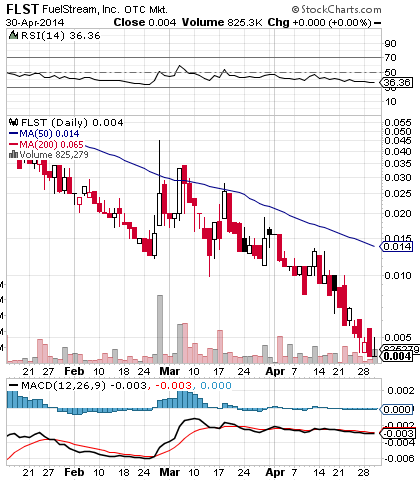 SUNRISE, FL–(Marketwired – May 1, 2014) – Fuelstream, Inc. (OTCQB: FLST) (“Fuelstream” or the “Company”), a international reseller of Aviation Jet fuel, is pleased to announce the official launch of a new website that will allow clients to access fuel pricing and other information on a real-time basis. >>> FULL PR