Yesterday, apart from highlighting the many winning options plays that came out of Wednesday morning’s premarket report, we also brought up a new idea for the DLTR options chain. We signaled the DLTR Weekly $85 Calls.

Those $85 Calls were big movers, trading in a range from 1.90-4.66 on the day. That represented an intraday pop of 145% so cheers to any of those who may have taken advantage of that healthy run.

We’re looking to BIG this morning on the heels of an earnings beat and cash dividend annoucment. The stock is gapping considerably above the $50-level to new annual highs. We’re going to be looking at the BIG Weekly $47.50-52.50 Calls* for possible quick-hit trades today.

*Caution: We always like to remind our readers that trading options contracts with a weekly expiration on Friday is an inherently risky proposition. Please do not attempt to do so if you are not an advanced-level trader.

We’re coming across RLYP at an interesting time today. The stock is gapping up this morning, oddly enough, on news that hit for a rival.The FDA refused approval to pharma giant AstraZeneca for its potassium-lowering drug, effectively leaving RLYP’s competing drug as the lone option in the marketplace.

We’ve formulated an options idea for this play as well. With no weeklies available, we’re going to be monitoring contracts within the range of the RLYP 06/03 $20-25 Calls.

We want to start things off today by focusing on the possibility of taking advantage of the heavy activity in GOOG on the heels of its post-market earnings release yesterday. As one would expect from an untraded-upon earnings beat, GOOG is spiking considerably in early trading. On a related note, the new figures seem to have allowed Google to surpass Apple for the title of largest U.S. company.

We’ll be on the lookout for a potential early dip, then scan for the choicest action within the range of GOOG Weekly $780-800 Calls. We could be in line to see some hefty intraday and/or intraweek swings out of those contracts if things play out as we suspect they might.

Despite a general bearish sentiment toward the 3D-printing sector as a whole in the media of late, we are seeing a potential opportunity with regard to DDD. Despite the array of poor publicity hitting newswires, the stock has been bucking the trend with a steady stair-stepping approach up off of its annual lows for the past couple of weeks.

The chart has an attractive look as you can see below, so we’re going to want to monitor DDD in the days and weeks ahead as its chances for an extended recovery seem fair.The first signal we’ll be looking out for is a breach of prior resistance at the highlighted level of 8.50. 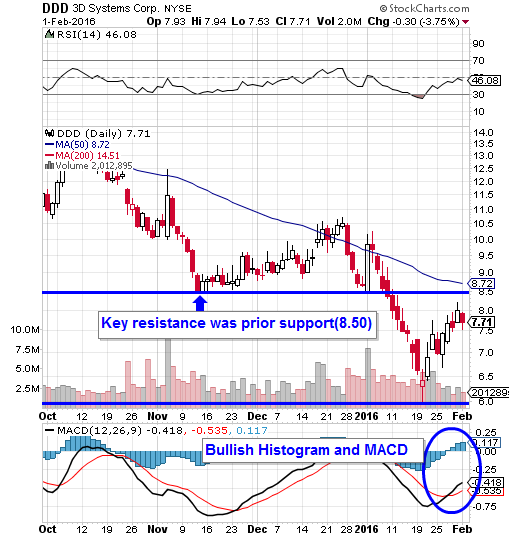 ADTM took off like a rocket yesterday on news of a buyout offer of roughly nine times the company’s market cap leading into the session. What resulted was a scramble for shares, and the upward pressure pushed the stock all the way from an early low in the .40-range up to the mid-.70 area.

Subject to shareholder approval, the all-cash transaction would offer $35M, or 1.50/share. From current levels, reaching that price point would mark a roughly 100% move the the upside. We’ll have our eyes peeled for further updates on the deal, as well as the immediate effect that the news will continue to have on the stock.