Under Armour, Inc. UA – For a fresh options idea yesterday, we were taking a look at UA Weekly $45-48 Calls and were provided a good opportunity for some impressive intraday gains beginning early in the session. We were quite pleased with the performance of five out of the six sets of contracts in our observed range. The exception to the rule were the $48 Calls, which weren’t quite pushed into the money (UA high: 47.80). The rest offered up great chances, which were as follows:

We also want to put arange of options contracts on watch for McDonald’s Corp. MCD on the heels of its earnings beat. We’re going to be tracking the MCD Weekly $125-128 Calls for potential daytrades.

CAUTION: Trading weekly options on Friday is very high risk, as the closing bell signals their expiration. To be attempted by advanced traders only!

When we introduced APRE to our readers on Monday (>>View Report), and at the time we ventured that it may display the same sort of volatility as is characteristic for such a low-float play, and we weren’t disappointed.

Over the course of this same past week, with respect to its status on OTC Markets, APRE went from bearing a stop sign, to a yield, and has now gone current in an effort to be more transparent. It’s really good to see management doing the right thing for shareholders! We’ll be anxious to follow the progress of this interesting company into the future.

Once more, check out our detailed APRE Report as a place to begin your own due diligence.

SKYS was part of a bottom watchlist we put together and published in our premarket report on Thursday, and that morning from a low of 1.30 to 2.58 we witnessed a 98% spike.

We suggested that our readers leave SKYS on their radar on Friday morning, and it was no April Fools trick! The stock bested its performance from the previous session by a decent margin as it traded in a range from 2.44-5.50, an intraday rip of 125% The stock traded massive volume, and was recorded as the top gainer for the day for the entire market!

As of Friday’s new high, our total observed upswing on SKYS in just two days has been a spectacular 323% so congrats to any of our followers who were able to snag a piece of the action!  SKYS serves as a shining example of why we look to stocks that have been beaten back terribly. Recovery-plays are, historically, among some of the most successful picks that we make when the timing is right. The timing was perfect here as is effectively demonstrated by the following chart snapshot without the need for annotation. 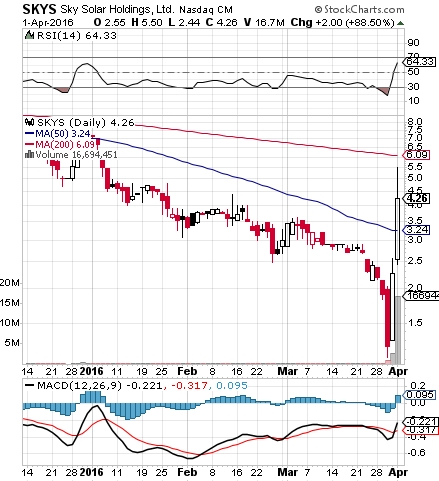 Towerstream Corp. TWER was also part of Thursday’s bottom watchlist, and it too has posted two consecutive sessions of northerly momentum. While not seeing gains at the magnitude of the previously mentioned play, from our observed low of .1099, the stock returned to .17, a respectable overnight gain of 55%

The ARO chart is filled with bullish indicators as we’ve pointed out below, thus the stock will become a point of keen focus for us in coming sessions. Not only does it qualify as a prime potential bottom-play, but there is a cavernous gap on the chart, the filling of which would spell double-bag gains or better from the current level. 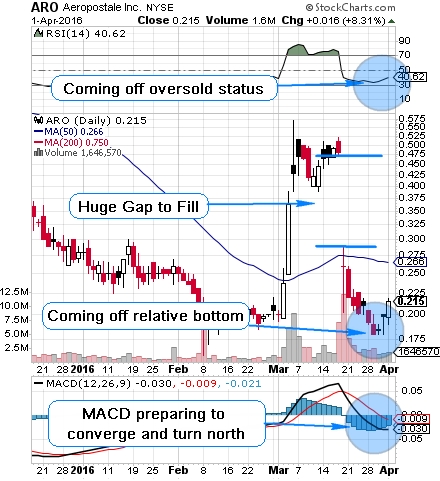 More possible bottom-plays to watch as we kick off the new trading week include ZFGN, TXMD, LNCO & LINE

We’ve also got an update on the chatroom call from Thursday’s session that came via the famous DJ, and allowed us a chance at gains of more than 1000%

Readers of our report on Friday morning, even having missed that epic first opportunity, were still treated to a chance at healthy returns on the day as the stock ran from an early low of .025 to a new high of .071. That marked an intraday swing of 184% on a brain-melting 671X its three month average volume!

Yesterday, we had just about the most successful day of 2016 so far in terms of the sheer number of red-hot movers we tagged in our premarket report. We went from the monumental options success of earlier sessions, to spotting some prime opportunities in the stock arena.

We let our readers know they could expect “some potential bounceplay action” from AGTK yesterday after we had tracked it over a 100% pop (.003-.006) and subsequent pullback toward the end of the previous session. We got exactly the type of behavior we expected from the stock, as AGTK piled on another excellent performance.

The stock traded in a daily range from .0032-.0048 for a solid 50% intraday surge, and unlike the previous day’s activity, it managed to hold a vast majority of the day’s advance into the close.

DNRG has appeared in our reports repeatedly in the past and after re-tagging it in yesterday’s watchlist, we were pleased to see the subsequent activity in the stock. It traded up from a daily low of .024, going to hit .035 for a 46% intraday upswing.

Like the aforementioned play, it too demonstrated strength into the market close, ending on its high-of-day and thus qualifying it to remain on our radars as a possible momentum play.

No sooner than we got the chance to congratulate readers who caught our alert of PKGM the Friday before last on the amazing run it produced (.0031-.013, +319%), did the stock turn in yet another winning card.

From its low-of-day at .0105, the stock took off on a run from which it did not look back as it surged past the two-cent mark to log a high of .0205. That worked out to an intraday romp of 95% and extended our total observed range on PKGM to 561% in just a week-and-a-half! The move came on the heels of some acquisition news (>>View PR)

Last but not least among our excellent selections from yesterday’s morning report was SPWZ. This was a first-time mention for us, and the stock provided a heck of an introduction!

We watched as SPWZ launched from an early low of .25 and ended up at a high of .44 for possible intraday gains up to 76% Like each of the previously mentioned plays, it held a healthy amount of that advance into the close.

We took notice of SCTY’s earnings miss today and immediately were struck with a potential options idea. The stock, which has already been under duress all this month, looks set to get kicked once again.

The activity is fueling our attraction to the possibilities that could be provided by the SCTY Weekly $19-17 Puts. We’ll throw these up on our tracking board for potential intraday/intraweek swing-trade chances.