Among the stocks we were mentioning in yesterday morning’s premarket report, there were quite a few that ended up turning in positive performances on the day.

Terra Tech Corp. TRTC – TRTC stood out among cannabis stocks with a healthy intraday increase of 21% as it ran from .108-.131. The stock closed with strength, just a tick below the HOD at .13.

We will continue to monitor, not only TRTC, but the marijuana space as a whole, like we were saying yesterday. There is a resurgence of activity in the sector that we feel will only increase as voting season is upon us. The legalization of industrial hemp in North Carolina this week is also a factor in re-generating a ‘buzz’ around cannabis in all its forms.
__

Global Digital Solutions, Inc. GDSI – GDSI is a stock we’ve continuously tracked for months now, as a quick tag search of our archives reveals. Yesterday, after including it in our extended watchlist, the stock made a healthy 51% intraday pop from a low of .0045 on up to .0068.

As measured from our recent observed low of .0012 (09/24), yesterday’s high registered as an incredible 466% swing in just a little over a month’s time.

Liberty Star Uranium & Metals Corp. LBSR – Another inclusion from yesterday’s extended watchlist, LBSR put up a respectable intraday performance as well. The stock traded in a range from .0034-.0049, giving traders the chance at up to 44% profits.

We wanted to take a minute to update folks on this pair of stocks that we’ve been tracking as recovery plays since Friday. While they didnt break out by any means yesterday, both managed to log higher highs and higher lows on the day, qualifying them for continued observation.

In fact, both APDN and MIL have managed to record three consecutive sessions of higher highs and higher lows since we entered them into the conversation. We’ll be interested in each case to see how far the trend will carry.

Added Note:
Speaking of bottom-bouncers, another stock with which we have been familiar in the past, is Liquid Holdings Group, Inc. LIQD. It has brought us some solid chances for gains previously, and we’ll want to closely observe as it appears to be quite oversold at the moment, and coming off of a bottom. Conditions appear to be ripening for a possible protracted rebound. 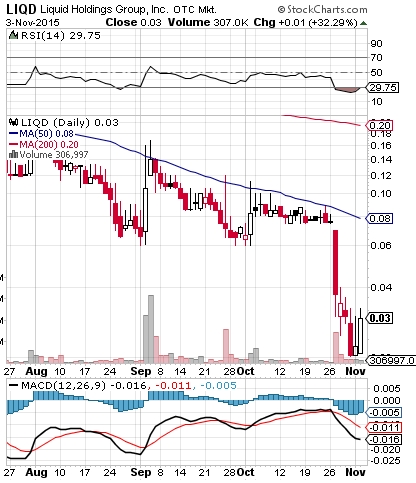 Amid our recent and ongoing success with options trading ideas, we’ve also managed to signal a few winners in the subpenny arena, and BHRT is one to add to that list following yesterday’s session.

We tagged BHRT for observation and immediately witnessed a textbook dip-and-rip pattern which led to an impressive intraday swing. The stock bounced off of support early at .0009, and subsequently rallied to a daily high of .0016, representing a 78% move.

We caught BHRT at an opportune moment, with the stock having just found a new 52-week low on Friday. We’re going to want to keep monitoring this stock for signs of an extended rebound; registering higher highs, and higher lows as the week progresses. There are a number of ripening indicators on the chart, as can plainly be seen below: 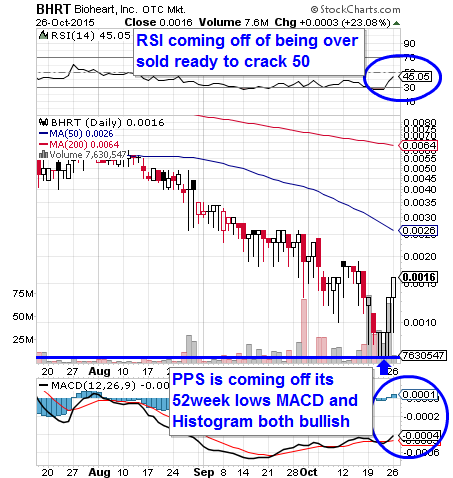 We’re going to tracking some new weekly options contracts after taking a look at the landscape of the market this morning. We’re right in the thick of another earnings season, and as we’ve mentioned on several occasions, that is the perfect time for quick-strike options trading.

Trends have a tendency to be more predictable during times such as these; earnings-beat gap-ups can and have led us to some serious dip-and-rip winners in the past.  As usual, we provide the range of contracts wherein we believe the greatest action will occur for each play:

Alibaba Group Holding Ltd. BABA – BABA is gapping up in premarket trading in concurrence with an Q2 earnings beat today. In response, we’re going to signal BABA Weekly $77-81 Calls, and as we just mentioned, be looking out for a classic dip-and-rip.

Apple. Inc. AAPL –  AAPL has an established history of running into earnings, which are incidentally slated to hit the wires after today’s closing bell. Yesterday, the stock pulled back and we’re already seeing a moderate gap-up this morning. We’re going to radar the AAPL Weekly $114-116 Calls for possible day-trade opportunities, as AAPL may run into the close in anticipation of earnings like we’ve seen so many times before!

Our closing thoughts on Friday were pertaining to a range of weekly options calls that we found attractive, namely the MSFT Weekly $51-53.50 Calls. They turned out to be our top picks of the day, with every single contract set making multiple intraday swings that facilitated chances for impressive daily profits.

We often comment about the elevated volatility in weekly options at the end of a given week, and Friday was no different. The single-session opportunities that were afforded to us by the MSFT chain were mind-bending:

Congratulations to any of our readers who jumped into the action for what ultimately turned out to be an excellent bunch of opportunities to close out the week!

If you didn’t catch our alert on ILST a week ago today, you ended up missing a heck of an intraweek swing out of this super-subpenny play.

We observed a low of .0004 early in the week, and that gave way to a pleasing run to a high of .0009 on Friday. It worked out to a move of 125% and it occurred during a week where the stock was setting records for all-time high volume. We’d say our timing in catching this one was extremely fortunate.

We’ll need to see ILST hold support at or above .0006 on any pullbacks in order to remain interested.