Everything we talked about yesterday ended up doing well, beginning with FREE. After opening up at .3723 the stock shot up to a high of .468, a move of 26%. Most importantly it held those gains nicely all the way through the close at .45.

This was right on par with what we had hoped to see from FREE, as it closed above the 50DMA. It seems our timing of the bounce worked in our favor, and moving forward, we’d like to see the stock continue to make higher lows and higher highs. The 10DMA of .49 and the 20DMA of .60 are going to be our next major hurdles to clear. 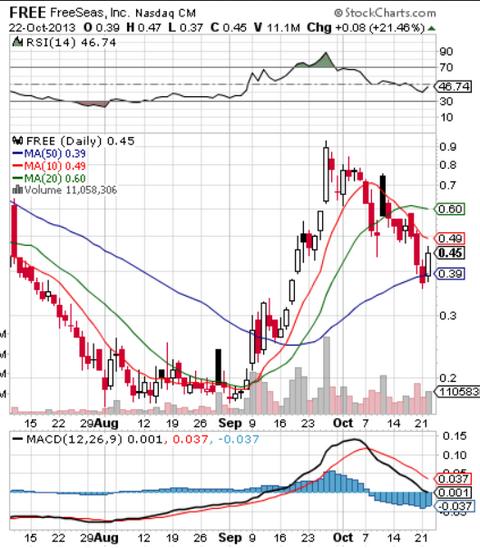 PHOT went on a similarly successful run as well, following yesterday’s morning report. The stock opened up at .0719, and continued to push the envelope all day, reaching its peak at .0899 shortly before 2PM. That marked an intraday gain of 25%, and like FREE, the stock managed to hold a significant portion of those gains into the close (.0847)

That solid performance came on nearly four times the average volume, so we are going to be keeping an eye on this stock for continued momentum.

Both sets of contracts offered the chance to gain over 100% At that point, any good trader is taking profits off of the table and chalking it up as a win. Between now and when AAPL releases earnings on the 28th, we’ll be looking to move our strike price closer to the money, and continue to take advantage of this cash cow any way that we can.