ONCY emerged from our extended watchlist and stole the show yesterday with an exceptional intraday run. The stock saw an early morning low of .80 then proceeded to bull its way upward for the remainder of the session, breaking through the 200DMA (.92) and setting its daily high of 1.10 inside of the last hour of trading.

The spike was good for gains of up to 37% on the day, and ONCY held a vast majority of those gains, closing at 1.07. We were extremely pleased with our timing in flagging this play when we did; the strong performance came on more than 12x the 3-month average number of shares traded, setting a new 52-week high for volume in the process.

With the kind of breakout momentum we saw build up in ONCY yesterday, we’re going to continue to reserve a spot for it on our watchlist, provided the stock can maintain support at or above the .85-.87 area on any pullbacks. It’s gapping up in the premarket this morning, so there’s a reasonable chance of some early profit-taking today.

ONCY is currently being given a 88% Overall “Buy” Opinion Rating at BARCHART.COM

We also wanted to make a note of another of our stated items of interest which made a nice move right off the bat yesterday. OHRP came off of our extended watchlist to trade in a range from 8.55-10.58, a 24% intraday increase.

Volume came in at more 16x the 3-month average for the session. The stock held more than half of its daily advances into the close (9.78), and is gapping up slightly in premarket trading this morning. The stock will receive our continued attention in the event that it can hold support above 9.50.
–

BIOC began appearing in our reports for the first time back on February 17th via our extended watchlist. Subsequent to that point, we witnessed the stock spike in a big way from a low of 1.35 up to a high of 4.91 just seven sessions later on February 25th; an initial run equal to an increase of 264%

After consolidating off of that high the stock found support at 2.73 on Friday before beginning to rebound. Yesterday brought a continuation of that recovery as BIOC found its way back to 3.94, which marks a 44% swing.

We caught IMSC earlier this week on Tuesday, as it popped up on a routine news scan that morning; the company had announced a potentially lucrative contract with the TSA and the stock was gapping up pretty big.

It took a couple of sessions for the stock to come down and find support, and yesterday following an update on the TSA contract in which we learned that the initial order for over 1100 explosive detectors to be deployed in airports across the country was received, the stock began to run. >> Read PR

From an early low of 1.26 IMSC made a nice 22% intraday move, topping out at 1.54. We want to continue to pay attention to this play as the week comes to a close, in the wake of this morning’s Q1 2015 earnings release, which contains some favorable figures:

Off of Today’s News Scan

We’ll group our Extended Watchlist items together with links to the important PR’s each of the companies has out this morning.

Geron Corp. GERN licensed its cancer treatment to a unit of Johnson & Johnson for up to $935 million: Geron could get $935M in blood disorder drug deal (Thu, Nov 13)

IWEB responded well to yesterday’s news like we thought it might, as the stock provided us with an early-morning move of 18% from .034 to .04. It was not able to get past resistance at four cents, and although we did see a consolidation off of that high, the stock was able to maintain higher lows and closed up 6.5% on the day.

As we were mentioning yesterday, the company has been great about announcing each new member of its growing roster of major clients. For the second day in a row we have another such announcement, as iterated in the PR below.

The University chose two 32TB IceWEB 2000 2U unified storage appliances; one to house video recordings from sporting events and one to be deployed at a remote data center for a disaster recovery copy. The faculty and staff will utilize IceBOX(TM), in conjunction with the IceWEB 2000 storage appliances, to provide BYOD anywhere access to the video archives. The coaching staff, administrators and athletes will be able to stream video content from their smartphones and tablets directly to video monitors in virtually any location on or off campus.

This marks the third prestigious university to retain IceWEB as a Cloud Services Provider inside of the last month. Regarding the chart, .04 has been acting as key resistance, followed by the previous swing high of .042. We’re looking for support to hold at yesterday’s low of .034. Below that, the 10 & 20DMA’s of .032 and .033 respectively. 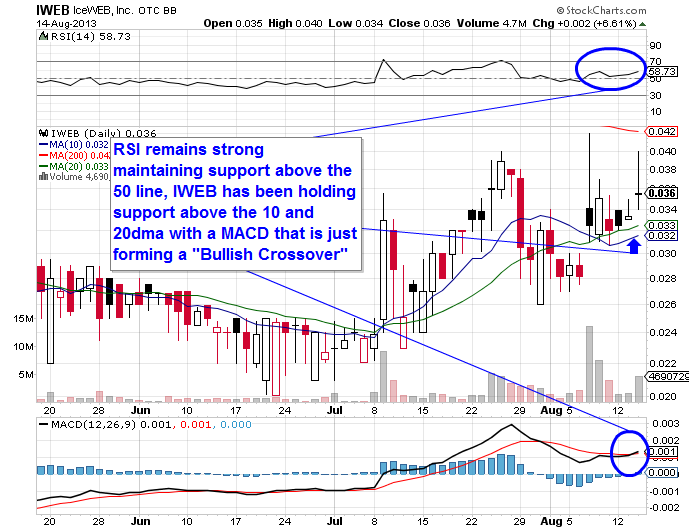 WILD is a play that we have added to our radar this week. The stock has just begun to start trading volume, and is the current subject of a round of promotion. We’ve spotted WILD appearing in newsletters, and with the chart waking up, we are going to keep our eyes peeled for any possible opportunities that might bring.

A break of the 200DMA at .404 would send this play into a Blue-Sky Breakout