We’re revisiting REVI this morning, a printing and graphics stock that has recently brought us the chance at some very impressive gains. Many of you will recall our initial REVI report, which we published back on January 21st.  That day, the stock would afford us the opportunity at a 42% intraday gain as it ran from a low of .0074 to .0105.

On January 28th we conducted, via our sister site StockTradersTalk.com, an exclusive interview with REVI CEO Michael Cipolla. It provided some unique insight; we learned a lot about Michael and the company, and would highly suggest anyone that missed the interview to check it out now. GO TO INTERVIEW>>

We touched base with REVI once again on February 5th, when a PR informed us of the company’s intent to branch into the industrial hemp industry in order to take advantage of the recent boom in interest for cannabis related stocks. REVI signed a consulting agreement with a subsidiary of well-known Hemp, Inc. (HEMP). We passed this along to our readers that morning, and anyone who happened to be paying attention was handsomely rewarded. The stock shot up from a daily low of .015 to as high as .056, a 273% intraday spike.

Further along into this month, we learned that REVI’s consulting agreement with HEMP led to a joint venture. The two have collaborated to conceptualize “The Hemp Nation Magazine”, a magazine that will have its content produced by Hemp, Inc. with printing and publishing duties falling to REVI. You can catch a preview of the website at  www.hempnationmagazine.com to be launched with full functionality coming up on the 4th of July. In addition to the online portion of the magazine, a subscription-based initial run of 100,000 copies is slated to be printed by Resource Printing (REVI)  Read PR>>> 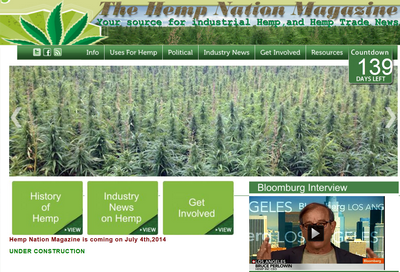 Perhaps the most exciting part, is that the record setting earnings came on the strength of REVI’s core business. When one takes into account the added venture of The Hemp Nation Magazine, REVI’s new-found direction, it is imperative that we keep this stock on our radars moving forward and follow this storyline through to its conclusion.

We prepared a video of the REVI Chart for your convenience:

This morning, REVI released an update PR which included not only some of the things that we’ve just outlined, but mentions one of the company’s other projects, WikiClickPrint. According to the release, development of the WikiClickPrint On-line Printing Platform is ongoing, “The full rollout of Wikiclickprint is very close and our customers will love it” said Kaiser.

RECENT PRESS AND OTHER RELEVANT LINKS:

We turned our attention back to REVI at the perfect time when we released yesterday’s morning report, in which we put the stock on high alert. The announcement that the company is entering into the insanely-popular marijuana sector went over extremely well.

We mentioned that the gains could approach that which we saw from several of the other pot stocks on our radar, and we weren’t disappointed in the least. Starting out from a low of .015, the stock went absolutely bonkers, topping out at .056. That was good for a monumental single-session move of 273%

Many of you will recall our initial alert on REVI at which time the stock was trading at .0074. From that point, yesterday’s high represented a total possible gain of 657% in just 11 trading days.

There was no need to worry if one huge gain opportunity wasn’t enough, because we provided several on Wednesday. Also appearing in our morning report, EAPH added to its legend in a big way.

We picked up on this play back on the 8th of January at a price of .0041, and were lauding the stock for bringing us over 700% in gains up to its high leading into yesterday’s session (.0335). But things got even more exciting upon the opening bell, as we would observe a new high of .0735. From its daily low at .035, EAPH tacked on another 110% gain.

From the low following our first mention of this play less than one month ago, that high spells an increase of 1693% Congrats to anyone who was able to secure even a fraction of the profits afforded by that mega-move!

We tagged USEI in an afternoon report we sent out on Monday shortly before 2:30pm when the stock was trading at .0027, and it made a 137% move for us before the close. We are happy to report that the stock hit a penny during yesterday’s trading, marking a total possible gain of 270% in less than three full sessions.

We’re extremely proud of our own recent performance, because we work very hard to put out a great product. We know of no other newsletter that is able to deliver so many huge winners to its audience on such a consistent basis! 2014 is already shaping up to be one of our best years ever, so if you’re just signing up for our reports, your timing is excellent!

By now our readers know quite well that we’ve been hot on the trail of cannabis stocks for a long time now. While specific plays catch our attention at different times, as a whole we continuously monitor the entire sector. One of our all-time favorites, HEMP, has provided traders with a golden opportunity over the past week. We last zeroed in on HEMP a week ago on Jan. 29th, and at the time the stock was trading at a low of .0685.

Since then it has been on an absolute tear, rocketing upward and yesterday reaching an astonishing high of .288. In just a week’s time, this play has afforded us the opportunity to gain up to 320%

We’re particularly interested in following the activities of this company because unlike a lot of the pot stocks we’ve tracked, it centers on the industrial hemp sub-sector, which scored a recent victory on Capitol Hill with the Fed’s green-lighting of commercial hemp production.

LAS VEGAS, Feb. 3, 2014 (GLOBE NEWSWIRE) — Hemp, Inc., (OTC:HEMP) America’s first all-industrial hemp public company, applauds the U.S. House of Representatives for legalizing the cultivation of hemp. For the first time in decades, the Federal government is allowing farmers to cultivate hemp. As of Wednesday, January 29, 2014, pursuant to the passage of the farm bill, the cultivation of industrial hemp is legal on a Federal level and is clearing the way for industrial hemp pilot programs in states such as Colorado, Washington, California, Kentucky, Maine, Montana, North Dakota, Oregon, Vermont and West Virginia, where growing the plant is legal.

Continuing our cannabis coverage, we have EAPH, which we first began following on Jan. 8th (At a price of .0041). Like most of the other pot plays, we have been witnesses to extreme gains over the past few weeks as the PPS has grown by leaps and bounds.

At yesterday’s high of .0335, the stock was up a staggering 717% from our initial mention.

The preceding two stocks weren’t the only ones to put up impressive performances yesterday. We also had TRTC touch a new high at .809. As one of the plays in this sector that we’ve tracked since 2012, we’ve followed along as it has exploded in 2014, trading up from ten-cent range.

A gain of more than 800% in just over a month’s time is certainly nothing to sneeze at!

We’re placing REVI on high-alert again today, as this stock which has already done very well for us in the past, could be set to get its next leg-up on the strength of an exciting PR out this morning. A joint venture with a subsidiary of another of our heavy interests, HEMP, is sure to garner some serious attention in a trading community which has become increasingly infatuated with marijuana stocks. Currently a printing and graphics firm, a foray into this new arena could mean future gains for REVI approaching the same magnitude of several of the other pot plays on our radar, so we’ll be tracking this story very closely.