We offered up a buffet of options choices yesterday, and two of our ideas panned out immediately, with our longer-term idea still needing some time to mature.

The ones that worked out without delay were the designated ideas from the DBI and CONN chains. They were the DBI 12/20 $17.50-15 Puts and the CONN 12/20 $17-15 Puts.  Both of those were bearish signals on puts, and both yielded solid intraday results, good for opportunities to score the following daily gains:

Walmart was already building a nice head of steam on the chart in the weeks leading up to this morning’s earnings release. Things have kicked up a notch this morning as Walmart recorded a resounding across-the-board beat, including an online sales increase of 33%

Given that we are always looking out for opportunities to trade options on the heels of a solid earnings beat, we are going to slate some Walmart calls for observation this morning.

We would also like to make mention of ALT this morning, after taking notice of the significant pickup in both price action and volatility yesterday.

That was preceded by a lengthy consolidation period as you can see on the snapshot below, and at the present time, the stock is beginning to come off of being oversold. We’ll watch this one for a potential recovery play in upcoming sessions. 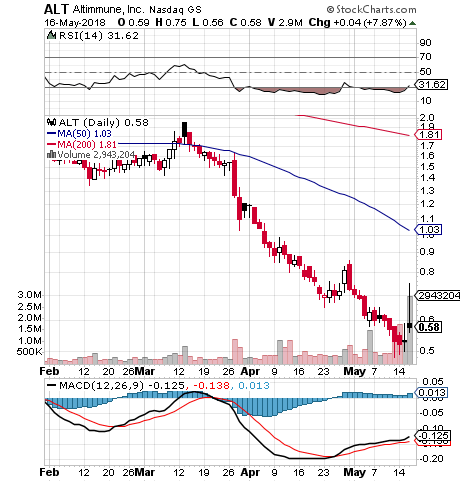 We’ve often said in the past that it’s better to be early to the party than late, and ANY is a perfect example of why. We tagged this play on Wednesday after noticing some unusual activity the previous day, and things didn’t really kick off right away. We observed a low of .15 during that session.

Yesterday is when things really moved into high gear, with the stock having an excellent day, trading in a range from .1941 on up to .29 for a 49% rip, and we’ll definitely want to keep tracking the activity into today, as the premarket high has equaled yesterday’s daily high.

From the low of .15 that we saw on Wednesday, ANY’s total upswing thus far has amounted to 93% Quite a respectable two-day jump.

Vivint Solar VSLR Recap – Speaking of solid movers, we also wanted to quickly update the total observed range we’ve seen on VSLR, which reached a new high of 5.50 yesterday. From our witnessed low of 2.75 following our report on the morning of May 18th, that comes out to a nice, round 100%

We want to radar AVEO in the wake of the announcement that its advanced renal cell carcinoma treatment has been recommended for EU approval by a scientific committee of the European Medicines Agency. The stock has gapped up into Blue Skies this morning as a result, with a new 52-week high of 1.28.

Concerning the chart itself, the 50DMA is rising toward the 200DMA and it appears as if a Golden Cross is imminent.  We’ll want to see AVEO hold at or above recent resistance at .89 on any dips in order to hold our interest.

We’re bearish on BBBY following the company’s post-market earning miss yesterday, which has caused a breach of trend-line support to the low side. We’ll be observing the BBBY Weekly $31.50-30.50 Puts* for possible day trade opportunities.

*We don’t include mentions of weekly options contracts on a Friday without explicitly warning our readers every time. Trading weekly options at the end of the week is a hugely risky proposition that should never be attempted unless you are an expert trader!