Skip to content
Oxygen Biotherapeutics, Inc. OXBT
–
Our readers who have been with us since October will remember OXBT, and that we were fortunate enough to catch it at a low of 1.46 before it steamrolled its way up to 11.40, affording us the chance at gains of 681% We re-tagged it on December 19thafter the consolidation off of the initial spike brought the stock back to find a bottom at 4.20. Our timing on that alert ended being spot-on, as the pattern reversed and OXBT began to ascend once more. As of Friday, the stock had reached a high of 7.40, which represents a gain of 76% from the recent 4.20 low.High volume and a strong close at 7.35 for Friday’s session will ensure OXBT a spot on our watchlists as we kick off this new trading week.

We pointed out the Golden Cross in progress for PROW on Friday, and despite already having witnessed gains in excess of 515% from .0065 to Thursday’s high of .04 (Initial alert- 12/20/13) we were able to reap further profits as the stock continued to uptrend, topping out at .048 and settling back only slightly to close at .0472. That high pushed our max gains on PROW to 638% in less than a month’s time. Congrats to anyone to has been able to take advantage of this rapid-gainer.

As is the case with any stock that rises so quickly, we’ll need to execute our trades with tight stops, and be on the lookout for signs of a reversal while still remaining open to the possibility of a continued breakout.

We’ve followed RNN from December 11th (Low .4026) onward, and have been duly rewarded for our persistence. Friday, we reminded everyone to be on the lookout for more solid gains, as we had already followed the stock up over 90% and were witnessing some heavy pre-market trading pushing the price even higher. RNN would go on to touch a new high for us at 1.19, which represents a gain of 196% from our initial alert low from just a month ago.

This took place on well over 15x the 3mo. average volume, with a healthy close at 1.14, so we’ll be watching RNN carefully today. Like our previously mentioned plays, RNN has been gaining a lot of ground over a short period of time, and should be monitored closely. Perhaps more so than the others, a quick peek at the chart shows it beginning to look overbought. Vigilance is key! In the event of a pullback, we’d like to see RNN hold support somewhere above the .80-level. 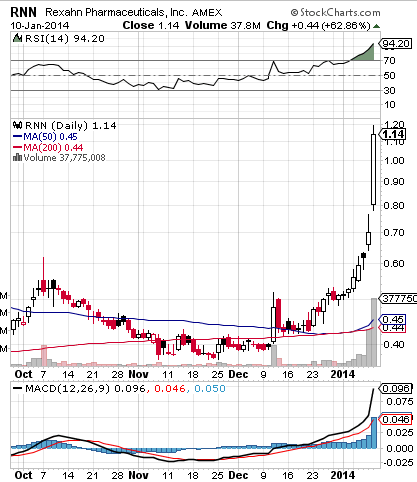 We want to add BYD to our watchlist today. We haven’t mentioned this one before, but are interested in both the building chart, and the sector in which the company operates. BYD operates over twenty gaming entertainment properties across Nevada, New Jersey, Illinois, Indiana, Iowa, Kansas, Louisiana and Mississippi.

Gaming stocks were a hot ticket in 2013, and with online gaming now being permitted in Nevada, Delaware, and New Jersey, some folks believe that national regulation is ‘in the cards’. The gaming sector, both online and brick-and-mortar, is going to be one to watch intently in 2014.

We mentioned yesterday that despite some slight pullbacks in a few of our marijuana-related stocks on Friday, that we had better be on the lookout for rebound action. There were definitely some opportunities for that provided by some of our favorite ‘pot stocks’. The majority of the sector did indeed experience further gains, and we certainly saw tons of volume on all accounts. Here are a few of the more stand-out performances from this sector that we have been tracking heavily for an extended period:

GRNH continued its multi-day run on Monday. This was one of the ones that did not pull back on Friday. GRNH has been on a strong uptrend since we caught it toward the end of last week as it was trading at .045, and as of yesterday’s high of .185, the stock had given us the chance to make up to 311% in profits in just three sessions.

TRTC made a nice move on Monday as well, trading from its daily low at .157 up to .185 for a 16% intraday gain. This came on roughly three times the average volume.

We liked the session put up by OXBT following its inclusion in yesterday’s extended watchlist. The stock made a solid 15% move from 5.5788 up to 6.44 on heavy volume. We’ll continue to keep an eye on this play moving forward. The company has news out today, announcing a couple of upcoming conference appearances.

Oxygen Biotherapeutics’ Chief Executive Officer, John Kelley will deliver a Company presentation at the OneMedForum on Monday, January 13th at 11:30am and the Biotech Showcase(TM) 2014 Conference on Wednesday, January 15th at 11:30am. Mr. Kelley will provide an update on the business operations, including the acquisition of certain assets of Phyxius Pharma Inc. and the development and near-term commercialization of levosimendan to prevent and treat cardiac surgery patients at risk for developing low cardiac output syndrome (LCOS).

AMMX first appeared in our extended watchlist last Monday, and once again yesterday. During yesterday’s session we observed as the stock traded in a range from .0064-.0085, a 33% move. From last week’s low of .0047, that’s a gain of up to 81%

AMMX closed at the .0085 high of day on greater-than-average volume. Couple that fact with some of the indicators on the current AMMX chart, and this shows itself as a momentum play of great interest for the remainder of the week. 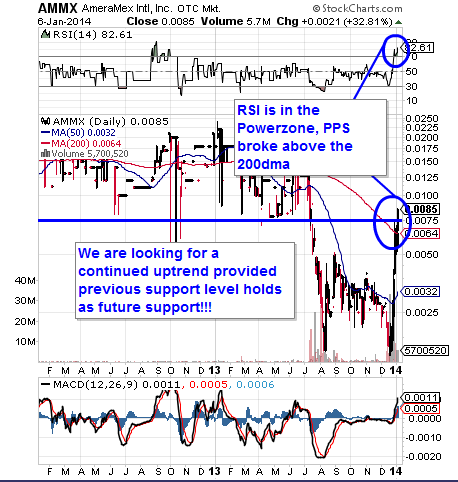 Another interesting pick from yesterday’s extended watchlist was SEED. The stock traded in a daily range from 2.15 up to 2.67 (+24%), and finished on a strong note 2.56.  We can see that SEED is gapping up this morning, with premarket trades going off as high as 2.95. We’ll be eager to see how much more this play can continue to push the envelope.

Cannabis Sector Update
–
After an influx of new subscribers joined us over the weekend, we’d like to take this time to welcome our new friends, and try to get you up to speed as soon as possible. In a time that now spans three calendar years, we have been vigorously tracking numerous marijuana-related stocks with some very profitable results.

Last week (possibly aided by the first stores opening for sales of recreational marijuana in Colorado), the sector as a whole began to heat up once again, necessitating heavy discussion in our daily reports.  As can be expected when several sessions of frenzied uptrending carries stocks as high as we saw many of our cannabis plays, several of those stocks began to consolidate on Friday.

The exceptions were GreenGrow Technologies, Inc. GRNH, and Hemp, Inc. HEMP; High volume spread over multi-day runs often leads to high volatility as well, as in the case with HEMP, which did consolidate to a low of .021, but followed that up with a rebound back to .032, a 52% intraday swing.

GRNH continued its run from the previous session where we had witnessed a low of .045, and barreled its way to a high of .124. We’ll take overnight gains in excess of 176% any day!

As for the rest of the pot stocks we’ve been tracking that have relaxed a bit, we are still eager to see how they respond this week, and will be on the lookout for any chances we might have at bounce plays. Additionally, news of how the first week of sales went in Colorado will be sure to get even more eyes turned toward this burgeoning market sector. Check back for future updates, as we stay tuned in every step of the way.

Speaking of stocks that we’ve been tracking since 2012, PPHM has proven itself a winner for us on multiple occasions over the years, and our most recent alert is turning out to be no different. Following that last mention, we observed a low 1.35, which at this morning’s pre-market high at 1.99 represents a 37% increase.

FDA-related news out this morning could fuel a serious push in a Northerly direction, so we won’t want to take our eyes off of PPHM for one moment as trading commences this morning.

“The fast track designation is a milestone for the SUNRISE trial program and represents a step closer to bringing bavituximab to the market,” said Robert Garnick, Ph.D., head of regulatory affairs at Peregrine. “We are very pleased that the FDA has recognized the potential of this novel therapy as a treatment for this serious and devastating type of cancer and look forward to working closely with them to ensure the most efficient review process.”

Like the rest of the mentions in today’s newsletter, our history with PLUG goes back a long time. It has brought us percentage gains which cumulatively number in the thousands, and the New Year has brought new life for this one as well. This past Thursday, we caught PLUG at a low of 1.89, and were pleased at the solid 23% move it provided to 2.33. That figure is increasing this morning, as the stock is trading as high as 2.77 in pre-market action, a gain of 47% over Thursday’s low.