SCOK was a huge standout call from yesterday’s newsletter. The play came off of our extended watchlist and it was pretty apparent right from the get-go that we had a breakout runner on our hands.

After trading for a little as 3.35 at the open, the stock quickly shot skyward, bulling its way up to an astonishing afternoon high of 9.37. That was an incredible intraday pop totaling 180% on volume exceeding the monthly average by more than 151X (an all-time record!) so cheers go out to anyone who caught this monster mover with us!

The major chart development came concurrently with an announcement by the company regarding an upcoming coal-to-gas conversion project in China which is “expected to be completed in February 2015 and yield syngas output of 60,000 cubic meters per hour, which the company says will equate to $30 million-$45 million in added gross profit by 2015.” >>>READ PR

It’s important to temper enthusiasm after a huge news-fueled run like this, and to keep in mind that even after yesterday’s huge pop, the company does still only have a market cap of roughly $170M, so a course correction would not be a surprise from this point. For anyone who isn’t already in on the action, a safe route would be to wait for a pullback and subsequent bounce.

We sincerely hope some of our readers were able to capitalize on our flag of ALKM in yesterday’s report. We radared this play after it was yielded up by a routine morning scan showing significant trading action, and it was a good thing we did.

ALKM started out trading at .157 in the early morning, and began to steadily uptrend. Around lunchtime, things really began to kick into high gear, as the stock would go on to reach a high of .27. That marked an intraday increase of 72%

The volume in ALKM was rather significant as well, to the tune of just over 38X its 3-month average, and the stock held a vast majority of its gains into the close, however we would still urge readers to use extreme caution in dealing with this stock beyond this point. We’ve identified it as the latest pick from the notorious group of promoters formerly known Awesome Penny Stocks, who says that they “expect to receive” a whopping $4.6M for the promotion of ALKM by a group calling themselves “LaLuna Services, Inc.”

If the group’s past exploits are any indicator, the stock is likely to fall flat after its rapid upward surge, and runs a real risk of being halted by the SEC (like their next most recent play, PGFY). For that reason, we would categorize ALKM as extremely high-risk moving forward, but with large funding of that nature behind the promotion, a continuation of momentum into today does remain a possibility.

Regardless of what happens from here, we’ll chalk up our happenstance inclusion of ALKM in yesterday’s email as a big win!

We’ll continue to have an eye on EVLI into next week. The stock essentially traded sideways on relatively light volume during Thursday’s session, thus all of our observations of this play still remain true. A recovery pattern is in effect with EVLI as it reached 52-week lows five sessions ago, and has registered higher lows each day.

We’re going to be looking for EVLI to hold support at or above a nickel, while .07 is acting as resistance. A look at the chart still shows bullish indicators; the MACD which recently crossed is diverging sharply as the stock continues to trend off of its recent lows. 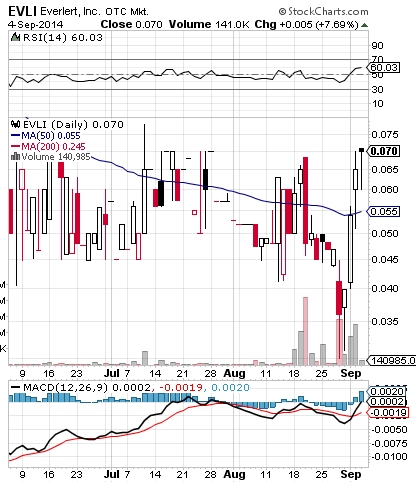 We started off this short week with a note on KNDI, mentioning that it had been hit hard the previous Friday, and that we would be waiting for the dust to settle which has been occurring all week.

Currently the stock is holding support above $17, and this is going to be another one that we monitor into next week for potential rebound.

We’ll want to be ready to take quick advantage of any further rebound chances the stock might offer up from here. It was trading over a penny as recently as the third week in August and the chart looks to be ripening. 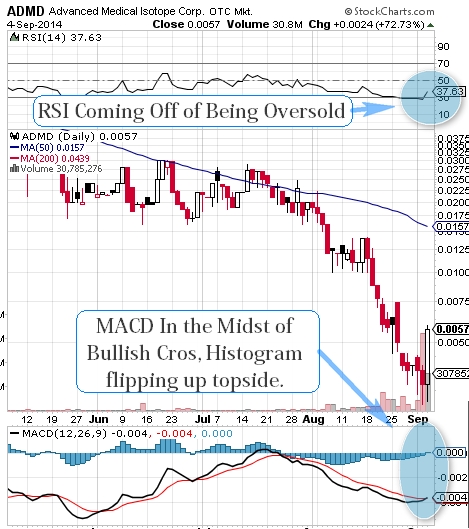 CANV is a stock that recently fell off of a cliff, and found itself trading at 52-week lows.  We like to monitor such plays during their recovery, which has already begun in this case. Trading near its annual lows, CANV appears undervalued, especially in light of the figures contained in the earnings report put out by the company yesterday.

Highlights included a Q2 net income of slightly over $8M, as compared to a net loss of $348K for the same quarter in 2013, and over $9M in cash on-hand. We suggest you read the release in its entirety >>> FULL PR

The stock was trading as high as $20.00 just a few months ago; regaining even a portion of the ground it has lost from current prices in the mid-$3 range would mean the chance at a significant profit for nimble traders.

ACHN is a stock we began to track earlier this summer (June 9th) as it was in the midst of a massive surge. At the time we caught it at a low of 3.72, and it ran to nearly $8 over just a two-session span. In the following months, it had been trading in a rough channel between the mid-$6’s and mid-$7’s, and just cracked over $8 yesterday for the first time in more than a year.

This morning’s PR regarding the company’s hepatitis C drug, which was been found to cure all patients in mid-stage trials is also contributing to a huge gap-up that has the stock pushing the $10 mark in the premarket. At that level, we’re already looking at a 168% move up from the the lows we observed in June, and we’re certainly going to have the stock on more intensive watch moving forward.

After appearing in yesterday morning’s extended watchlist, FREE went on to break above the 50DMA at .66, and run 28% intraday from .631-.809.  We want to see higher highs and higher lows acheived as this is another play coming off of its 52-week lows. We’ll need to see it maintain support above the previous 50DMA of .66 in order to keep our attention.

Continuing our coverage of the PBR options chain, we wanted to throw out a few quick ideas as the week comes to a close. We may be interested in the August 22nd $15.50 and $16.00 Calls for a swing trade into next week.