The current earnings season really kicked into high gear for us yesterday with our signal on AAPL. To go along with the activity we were observing in the premarket just formulated an options trading idea with the AAPL Weekly $125-127 Calls, and were ultimately met with chances for huge gains across the board.

Regardless of which strike price was chosen within that range, multi-bag gains were there for the taking:

We were obviously very pleased with our calls and the intraday opportunities they provided, and  have no problem simply walking away after such a bang-up session. That being said, we’ll go ahead and continue to track the activity over the remaining two sessions this week, just for good measure.

Facebook, Inc. FB – Continuing our ride on the earnings train, we’re going to signal a range of options in the FB chain on the heels of yesterday’s post-market earnings report.

Last week as we were following ALKM, mentioning it in all three reports from the 25th-27th, we witnessed a low of .0014. Yesterday, the stock broke out on mega-volume running to a high of .004 where it also closed, having traded 6X its 30-day average volume.

It worked out to a week-over-week increase of 186%  We’re also going to want to continue keeping tabs on ALKM after yesterday’s strong close.

Although it would end up reversing and heading lower as the day progressed, STX did ride the bullish wave off of its healthy earnings beat for a solid upswing inside the first hour of trading yesterday.

That did facilitate a window of opportunity on the options contracts we were tracking, the STX Weekly $41-43.50 Calls. Traders who were quick on the draw yesterday morning could have taken away a piece of the following moves:

We did signal our hunch that there would be a reversal in-session and a corresponding idea for the Weekly $46 Puts in our live traders chat, and those ended up doing quite well also, subsequently running from .60-3.29 (+448%) as STX continued to consolidate into the close. 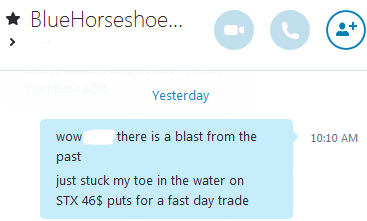 It’s another example of why we urge any of our readers that want to get in on our daily traders chats to get a Skype contact request over to username ‘stocksumo’. That’s all it takes, and you can stay up to the minute on changing ideas throughout the day, and submit some of your own!

The current situation with the AVGR chart has caught our eye this midweek as the stock reversed course this week after a steep and rapid decline. We’re seeing increased activity in the premarket and AVGR has pushed its way up regaining much of the ground it has recently lost.

Currently trading around the 3.00 mark, a return to its recent swing high from roughly a month ago would mean gains of up to 50% so we’ll be monitoring AVGR over coming sessions for a possible continuation of the recovery that is presently in effect. 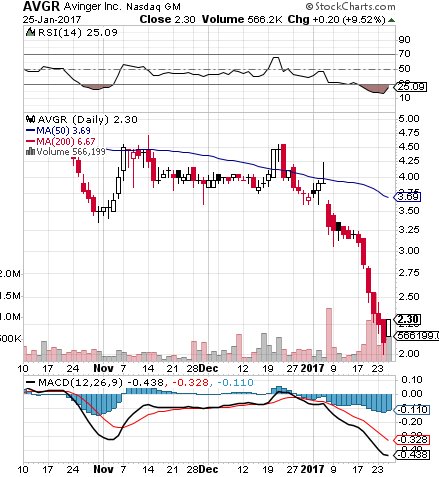