We placed BOTY on watch on Friday after noticing that the stock had begun to launch off of its bottom, posting unusual activity the session prior. It was a good thing that we tagged it when we did, because Friday brought an even more considerable surge to the updside.

BOTY traded in a range from a low of .0056, cracking through the penny barrier, and reaching as high as .015. That was good for intraday gains of up to 168% and the excellent move came on volume of nearly six times the monthly average.

As the company name suggests, BOTY’s business is an actual women’s MMA league where the combatants wear lingerie instead of athletic wear. Being something so unique and potentially lucrative, it adds to our interest in continuing to track this play.

SPCL is another one we want to provide an update on this morning. We initially witnessed a fantastic run from .0075 to .02 on this play when we called it back on 11/18, and after a period of consolidation in the following weeks, we observed the beginning of the stock’s next leg up on Friday.

The run that BBGP made between the months of August and November this year was excellent, moving from the .20-range to more than 2.70. A recent dramatic selloff slapped the stock back down to the .20-level and just below, before the current bottom-bounce commenced.

We’re interested in tracking BBGP from this juncture in the event that the momentum we’re seeing gathered off of those lows should continue into this new trading week. 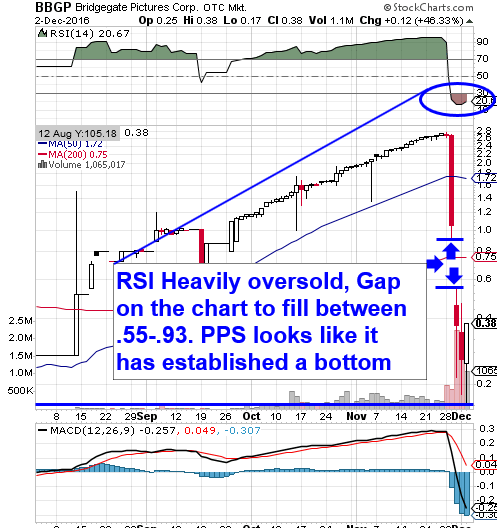 We’ve formulated an options trading idea for PODD, after noticing a few things about the stock. First, it’s in a good place on the chart, having exhibited the beginning sign of a bottom-bounce on Friday, reversing a downtrend that had persisted for over a week.

Next, we caught a Form-4 submission showing a significant buy by the CEO, in the amount of roughly $1.3M at the stock’s lows. Whenever we see directors of a company adding shares at relative lows, it piques our interest.

Accordingly, we are going to radar a set of contracts to watch in sessions to come, namely the PODD 01/20 $35 Calls.

We were just mentioning how we wanted to stay on FPVD’s trail yesterday morning, after the stock had shown us a nice 64% move on Tuesday.

We identified .036 as a key point of resistance that we wanted to see broken, and not only did that happen, but the stock smashed through and kept on running to an impressive new high.

It traded in a range from .022 on up to a nickel, for an intraday gain of 127% which occurred on roughly 7 times the three-month average volume. From our observed low on Tuesday, it represented a session-over-session swing of 198%

The previous resistance we mentioned at .036 will now be the level FPVD will need to hold support at or above in order to maintain our attention going forward.

We’ve had some excellent fortune recently with earnings-related options plays in the retail sector, and the opportunity to take advantage of yet another one may be ready to present itself today in the form of WMT.

Increased revenue for the quarter has led the retail giant to increase guidance for the remainder of the year, and the news is causing a notable gap-up here in the premarket. As the activity unfolds, we’ll be looking to possibly take advantage of WMT Weekly $73.50-76 Calls.