We went full bore on fresh options ideas for Friday morning’s premarket report, offering up what we felt were a set of good targets for five separate sets of contracts. One was a longer-term call in CVNA for March, which we’ll swing back around to in a later report, and the rest were quick strike plays, all of which produced huge intraday gain opportunities for ourselves and our readers.

Lithium Corp. LTUM – Recap
–
It was just this past Thursday that we mentioned LTUM on our watchlist and we are circling back today to report the solid move it has made since then. We always try to sprinkle in a few OTC plays despite our primary focus generally tending toward options these days. We are right in the middle of an earnings dead-zone, so it was helpful to have a play like LTUM on our radar.

The stock, from its initial low of .165, hit a new high of .33 during yesterday’s session. That represents a double bag increase of 100% in the span of just 3 trading days.

Our first order of business this morning is to give a rundown of the recent performance of MXSG, which has made one heck of a run in the time we’ve been tracking it.

We initially placed this gold play on watch last February 5th when it was trading at .0016 , and the stock, quite incredibly has put together a roughly 10-month uptrend.

Some of the biggest strides have come recently, despite gold prices cratering to their lowest values in that same 10 month period of late. That didn’t stop MXSG from running to a new high of .235 yesterday, which marks a mind-numbing 14,587% increase over the low we observed on the very first time we mentioned the stock in February.

That definitely makes MXSG one of our biggest success stories of 2016, and that includes options trading! Congratulations to anyone who has taken part in such an incredible ride! 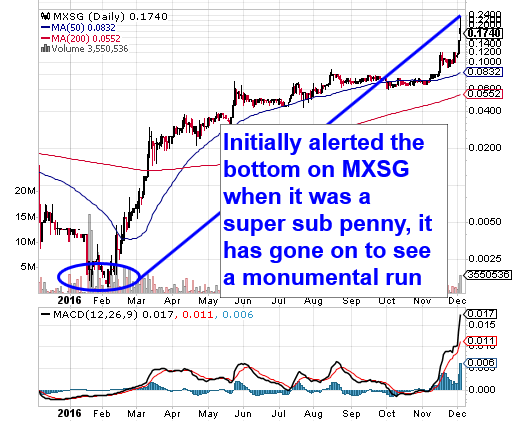 IFAN is another play we’ve been tracking that has also made big moves for us. When we first brought it to the table on October 24th, it broke out for excellent gains on the order of nearly 400% as it ran from .0031-.0154.

Yesterday, the stock went for a double-bagger, trading in a daily range from .0016-.0033 (+106%). It will interesting to see if it can carry some of its generated momentum of the past couple of sessions into further price surges. Another run at the penny mark from this point would factor in potential gains of up to 200%

GoDaddy is moving in the wake of news that the company would be attempting to boost its web hosting business with the acquisition of Host Europe in a $1.82B deal (>>View PR).

While the stock is at a good place on the chart, and receiving some attention, we’re going to radar some options to monitor over the next several weeks, in the GDDY 01/20 $35-36 Calls.