Amid a troubled market when a lot of stocks are stagnating, or even worse, plummeting, we managed to catch onto a great idea in yesterday’s premarket report with PHOT. Granted that we hadn’t mentioned the stock since the end of October, the timing in bringing back to the table was impeccable.

As you can see on the intraday chart below, PHOT logged a morning low of a penny before ramping its way up a full 100% to a daily high of .02 by early afternoon. It traded in a tight channel for the remainder of the session and managed to maintain a vast majority of those gains into the close at .0195. 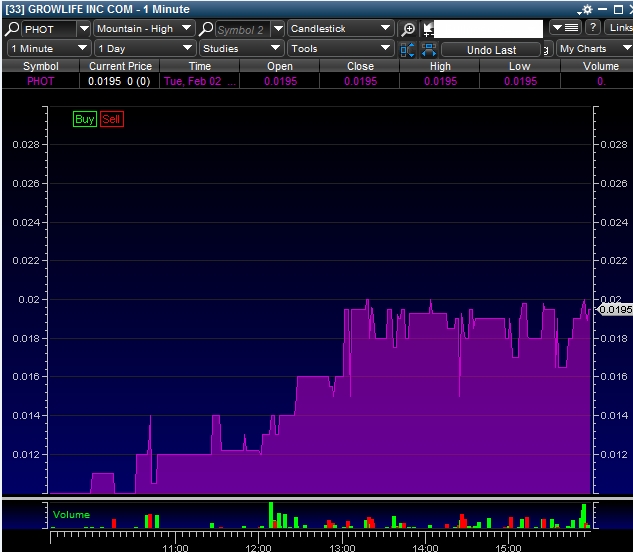 While its actions alone certainly qualify for putting PHOT on a continued momentum watch, we’d urge a strong note of caution due to the fact that it is currently garnering a grey listing and caveat emptor warning at OTC Markets.

Our options idea from yesterday’s report turned up some excellent quick-strike chances in the first half of the session. We tagged a wide swathe of contracts in the range of GOOG Weekly $780-800 Calls, and each of the eight included targets provided similar gain opportunities.

Again, similar profits could have been attained with any one of the contracts in our highlighted range. Cheers to anyone able to take advantage of those moves which were propelled by GOOG’s post-market earnings beat on Monday.

Added Note: Stay tuned for tomorrow’s report when we’ll be formulating some fresh ideas based off of one or more of the high profile earnings releases slated for post-market today (GPRO, GM, YUM, etc.)