Skip to content
American Community Development Group, Inc.  ACYD
–
ACYD played out the dip-and-rip scenario that we anticipated yesterday to the letter. The stock pulled back to a low of .031, before recovering ground on up to .049, marking the chance at  up to 58% in intraday gains.

The performance was solid enough to land us atop the Penny Stock Rumble as yesterday’s #1 Stock Pick. 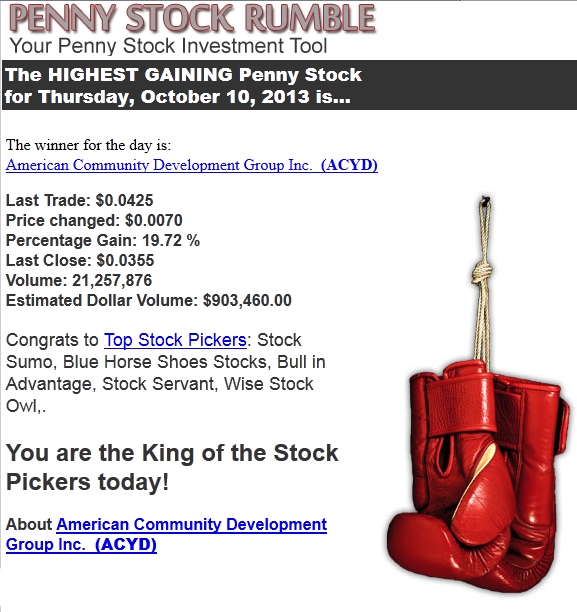 We easily spotted the opportunity in ACYD yesterday, and we’re taking a similar view of the stock today. It is making higher highs and higher lows on significant volume, and we will remain interested as long as that trend continues. Keep in mind, trading with a tight stop-loss is the prudent course of action on a play like this, where the stock has already exhibited greater-than-average volatility.

Facebook, Inc.  FB -Options
We saw a dip-and-rip from FB after a gap-up yesterday. The stock has been on the rebound this week, and we are looking for similar action today. In that event, we would expect the 10/11 $49 Calls to also undergo a dip-and-rip scenario. It seems a real possibility to see FB return to the $50-level or higher, which would likely cause those contracts to yield multi-bag gains. They closed at .54 yesterday, and are in the process of gapping up in pre-market trading this morning, putting us on alert for another potentially-fruitful session to close out the week.

Earlier this week, we were looking for TWGP to make a dead-cat bounce as the stock was tanking. This morning the stock is gapping-up so we could now be witnessing what could be an opportunity-laden recovery. There is a large gap to fill on the chart to the 7.00-range. Covering even half of that gap would have us looking at sizable profits from current levels.

FREE, WTAR, OCLR, VVUS, ASFI, ETRM
American Community Development Group, Inc.  ACYD
–
ACYD appears on our radar today as a full-bore breakout play, having increased over 3800% in less than a month. In June we tagged this stock as one to watch, and then again on 09/23. This illustrates why it is of vital importance to stay tuned to not only our daily focal points, but our extended watchlists as well.

At this point, ACYD has burst into the stratosphere, making entry from these levels extremely risky, if not inadvisable. We are not in the business of chasing extreme runners like this one, so what we’re going to do is monitor this play for a pullback and subsequent bounce.

It wouldn’t be the first time we’ve reaped profits from a stock in the same situation, if you recall BRND as an example. Over the summer, we timed the pullback after a series of tweets by Dennis Rodman caused the stock to spike violently over a very short period. On the heels of a gain in excess of more than 700%, that play afforded us a chance at over 80% on the dip-and-rip from .0077-.014.

Propell Technologies Group, Inc.  PROP
Another extended watchlist play, yesterday we placed PROP on watch after noticing it had broken its 50DMA in recent sessions. It turned in a solid intraday performance to the tune of 20%, having traded as low as .44 before hitting a high of .527, and closing strong at .52.

The next key resistance resides at .56, coinciding with the current 200DMA. Just a heads-up: Failure to breach that hurdle at .56 would likely give way to a pullback.

From when we originally mentioned these contracts on Wednesday, Friday’s close represented a move of 1820% off of the ten-cent low. 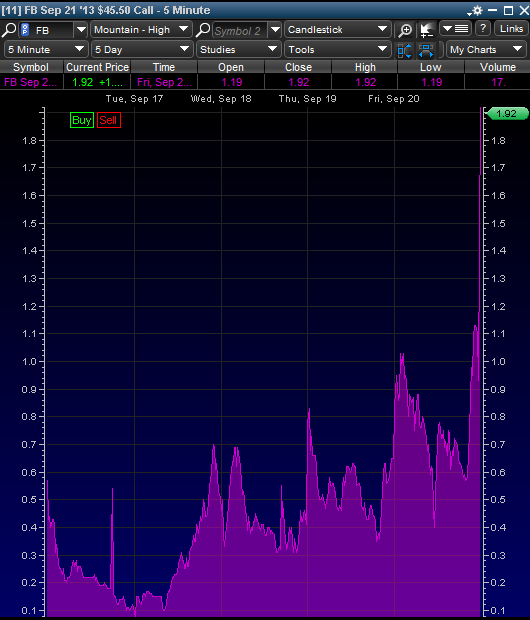 We started watching GOGO on Monday of last week, when the stock was trading as low as 14.79. At Friday’s peak, we observed a share price of 19.18, good for a nice 30% intraweek increase.

Remember, despite a very good short term performance from GOGO, that we are still keeping this stock on our long-term watchlist as well.

RNA appeared in Friday’s extended watchlist, in which we clearly stated that we were watching for a bounce after a big gap-down, and that’s just what we got. The stock hit low of 5.65 before traversing its way up to 8.00. That was enough for single session gains of 42%

Anything Technologies Media, Inc. EXMT
This was an extended watchlist play of ours all last week, both on Monday, and Thursday. On Wednesday the stock was as low as .0009, and on Friday, as low as .0011 before closing at .0019. That call yielded us gains anywhere from 73-111%

This is one from our ongoing marijuana stock watchlist that we had noted coming down to its support level, and that sharp eye really paid off. It sets yet another example of why we always urge our readers to pay every bit as much attention to our extended watchlist plays as the stocks that we feature.