First up this morning is a quick recap of the fresh options idea we formulated for yesterday morning’s premarket report. We had designated the CBRL Weekly $165-170 Calls as our targets of interest.

Two of those three contract sets produced opportunities for multi-bag gains on the day, with the third not far behind:

DRRX is a play that we began tracking last month (08/07). Following that initial report, we observed the stock trading for as little 1.22.

In the four weeks which have followed, DRRX has been a steady riser, stair-stepping its way gradually up to its new high yesterday of an even 2.00/share. That works out to a very respectable rise of 64%

We also want to shine a light on the current setup of the chart on NTRP. Poor marks on for its Alzheimer’s treatment should have pushed it down quite a bit, but there seems to be no readily apparent reason why the stock should have fallen as low as it did following the lackluster report on the company’s clinical trials.

At present the stock is hugely oversold, and from a technical standpoint alone, could begin a reversal on little more than a breath of air. Indication from the MACD suggests convergence toward a bullish cross in the making. Should enough people catch on to the present scenario and load up cheap shares at current pricing, it could happen sooner rather than later. Even a partial fill of the massive gap on the chart would mean big gain chances. 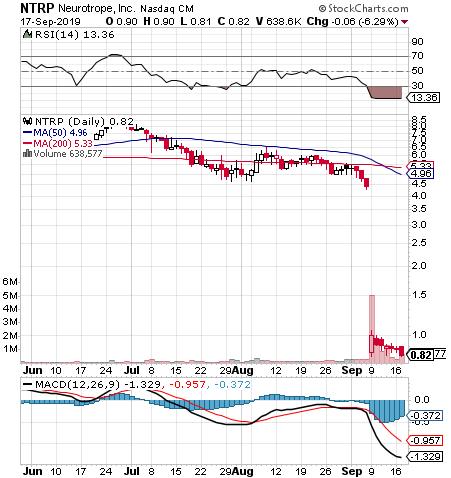