Skip to content
Our first order of business today is to welcome the many new subscribers who joined our community over the long weekend! We’re glad to have you with us; if you have any questions or some ideas of your own, don’t hesitate to send a reply to one of our daily reports. We’re always happy to interact with our readers!

PBR continued to recover off its 52-week lows on Thursday, with the stock reaching as high as 6.79. As a result the contracts that we’ve had under observation since the Thursday prior to that, continued to see some action after being pushed further into the money.

PBR is gapping up into the 6.90’s this morning, so we’ll be looking to roll our strike price up  and begin monitoring the 05/01 and Weekly $7 Calls.

Despite the fact that PVSP registered a high of .0035 on Thursday, that was what we refer as a “fat-finger trade” right at the open. Not much volume really went off at that level so its inadequate to calculate the gains we have seen based off of that figure.

The gains in this play have been easy to come by thus far, and it’s going to be one that we keep a continual eye on just as long as it continues to perform well.

We want to give our readers advance notice that we will be delivering a premarket report on a new biotech stock tomorrow. It’s a sector that has been trending lately, so don’t miss out! Keep a close eye on those inboxes or schedule yourself a reminder to visit BlueHorseshoeStocks.com in the 20 minutes leading up to the open!

This holiday-shortened week has brought another string of stellar opportunities for us with both stocks and options, and was an excellent way to close out the first quarter of 2015!

Firstly, our re-alert of PZOO yesterday came just in the nick of time for us to observe a nice upswing. The stock traded up from a low of .0052 to reach .0071, an intraday move of 37% and it did so on more than twice its 30-day average volume.

With the deliberate steps Pazoo has been taking to become actively involved in the cannabis sector, it’s certain to hold our interest for quite awhile. There was a new PR to that effect released after market open yesterday; PZOO’s wholly-owned sub, marijuana testing agency Harris Lee, will be taking full ownership of a “fully functional, revenue generating facility no later than April 30, 2015”. Learn More about Steep Hill @ SteepHillLab.com/colorado

Speaking of pot-related plays- Last Friday, we suggested our readers put THCZ on their radars as we were watching the stock search for support. It found it that day at .128, and managed to set higher highs every day since.

Yesterday came an enormous push to an astonishing high of .32; that registered as an overall increase of 150% from THCZ in just five sessions! Even more amazing, is the fact that we observed THCZ trading subpenny as recently as the end of January.

MDIN appeared on yesterday’s extended watchlist, and it too enjoyed a nice intraday move of 66%. The stock held the majority of those gains into the close, so we’ll be interested to see how it closes out this short week today.

On Monday, we called out PVSP in a well-timed alert that yielded the chance at intraday gains of up to 55% It took until yesterday afternoon for the stock to consolidate and make its way down to find a support level from which to bounce.

That came at .0013, and PVSP did make a nice rebound to the tune of 38% (.0018) This is yet another one which is tied to the cannabis space, so we can definitely see a theme being established here as springtime comes into full-swing.

We signaled May PBR $6 and $6.50 calls last Thursday as we noticed it rebounding off of its newly-established all-time lows. Although there wasn’t much open interest in the May $6 Calls that we highlighted, they were pushed into the money and there was an opportunity to profit for those that decided to take the trade. The low on those contracts was .32 following our alert, and they closed yesterday at .55x.79. With plenty of time left until expiration, we may not yet be finished with them.

It was on Tuesday March 17th that we called ESPR options and came away with percentage gains that ran into the thousands over the course of that week. The idea that we ventured was the 04/17 $90 Calls, and we saw a subsequent run from 3.50 to 28.50.

Following that huge run, we saw those contracts dip back to find support at 4.50 toward the end of last week. Yesterday, a news release helped push ESPR stock to new highs, and as a result the April $90’s went on another big run, up to their closing price of 16.35. That’s a 263% swing in less than a week!

ESPR traded up just shy of $110 in the premarket this morning. We will also want to keep a close eye on the 04/17 $100-110 Calls should the stock continue its upward trend through to next week.

The last time we looked in on PZOO was roughly eight weeks ago near the beginning of February. We think now is going to be a good time to refocus our attention on this company and its latest happenings, but first let’s take a look at what PZOO has done on the chart since that last report.

PZOO then peeled back off of that high, and would spend the next several sessions searching out a bottom, which it ultimately found in the form of a new 52-week low (.004) on the 4th of March. From there it made an even bigger run, shooting all the way to a high of .014 five sessions later. That marked a 250% swing. 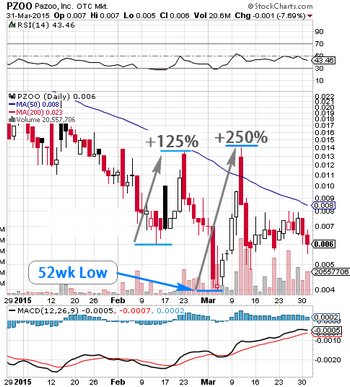 Following that huge run, PZOO has come down to find support just below .006, and from here we’ll be monitoring closely for signs of the kind of rapid gain opportunities this stock has exhibited in recent weeks.

In addition, Pazoo was extremely active on the press wires in the month of March. Noteworthy developments included an appearance on MoneyTV, a new website, connection with investors through social media, and a whole lot more. Links to those PR’s are provided at the bottom of this report.

As far as the current chart is concerned, we’re going to be looking for PZOO to hold support in the .0055-.006 range, and to make a run at its 50DMA of .0084. If it can manage that feat it could be off to the races; history certainly has shown PZOO‘s ability to make big swings over short periods of time. 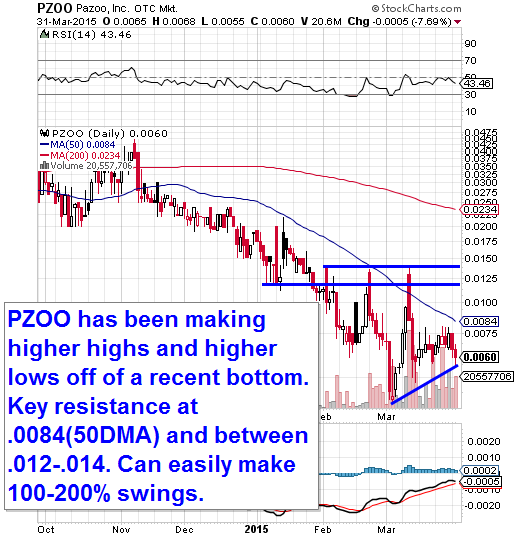 Be sure to stay tuned for future updates on PZOO. The company has been doing a lot to expand the marijuana testing aspect of its business, and as we were stating yesterday, the cannabis sector has begun to show signs of heating up in recent weeks. 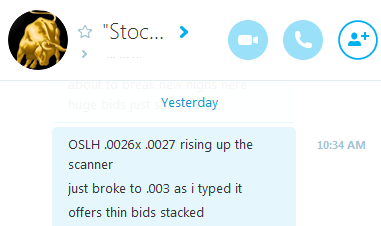 OSLH was a morning call in our traders chatroom, as you can see from the message stamped at 10:34AM. Subsequent to that the stock traded in a range from .0027-.0074, an intraday rip of 174%  This is why we always encourage our blog and/or newsletter readers to get involved in our chats if they have interest in doing so. Many winning opportunities not included in our premarket reports are offered up by ourselves and our members all the time! If you want to participate, all you need to do is send a Skype Contact Request to ‘stocksumo’.

HKTV appeared in yesterday’s report and went on to enjoy a sizable intraday gain. The stock traded in a range from 9.00 up to a high of 10.94; a respectable move totaling 21.5%