After noticing this morning’s earnings release from ANF, which included a big shortfall on expected sales as well as guidance for the remainder of the year, we may be interested in taking a bearish stance and using the current sentiment to our advantage with a series of puts.

We’re going to place ANF Weekly $22-19.50 Puts on watch as the stock is gapping down more than ten percent in premarket trading. If a large selloff continues to persist, we could be looking at some serious action in these contracts.

As long as the stock doesn’t recover past this morning’s premarket high of 22.95 once the session commences, this idea will remain in play.

We’ve got an interesting chart setup on this subpenny stock that is sufficient to warrant tagging the play for observation. In addition to forming a fairly strong ascending triangle pattern, there are a number of other bullish attributes of which to take note.

As we’ve pointed out on the following snapshot, AXMM’s coming off of being oversold, and we’re going to want to see that RSI surpass the 50-line. Meanwhile the MACD just underwent a bullish cross, and if we can see a breach of the .0029-mark, there’s little in the way of resistance until you hit .0055, which would also represent a breach of the current 50DMA. 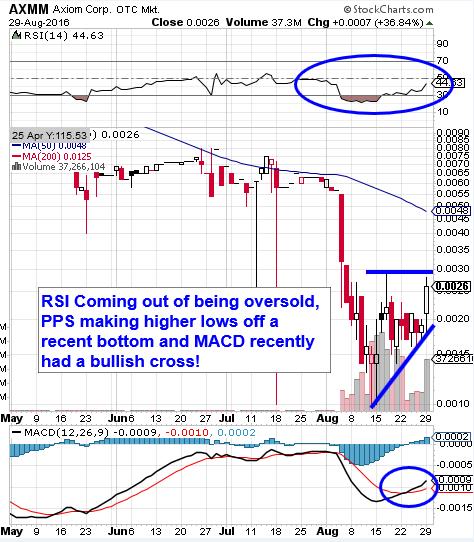