We wanted to swing back around this morning for a stock that we mentioned on Monday of last week. We said we’d want to have it on watch in later sessions, as the company had just released news of a service agreement with pharma giant AstraZeneca.

There was a slight pullback off of the initial spike that the announcement caused that day, and TROV found support at a low of .85. This morning the stock has reached as high as 1.35 in the premarket, which marks a rise of 59% over the lows we observed last week.

We want to continue to keep an eye on TROV and see it make higher highs and higher lows. If the stock can hold at or above previous resistance at 1.20 on any pullbacks, it’ll be a positive signal.

Hitting our radars as a bottom-bouncer this morning is MARA, which popped up yesterday with its first significantly bullish session in quite some time. It had been pretty well oversold for months, as you can see on the accompanying chart snapshot.

We’ll be interested to see if MARA can put together a multi-day trend, or if yesterday’s move was an aberration. The first step will be a breach of the current 50DMA at .40, which also coincides with an an area of considerable previous resistance. 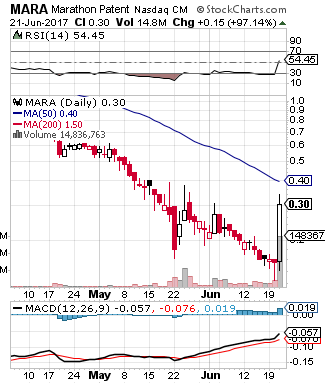 Highway Holdings Ltd. HIHO – Another potential bottom play we wanted to quickly point out this morning is HIHO. We’ve noticed that the stock has come up off of a double-bottom formation and has been holding support well at the 3.30 level over the past few sessions. We’ll look for it to continue to do so. 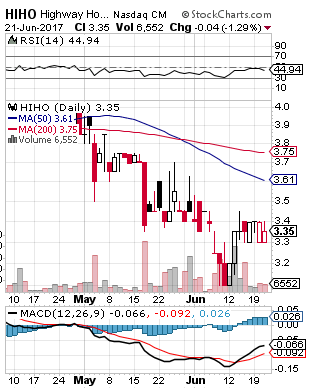