In Tuesday morning’s premarket report, we expressed our interest in PTBI based on some press, and the look of the chart. We expected to see a chance for a nice gain, but what followed has been much more impressive.

Yesterday, the company came out with news of a new acquisition in the morning, and that certainly added fuel to the fire. After a gap-up we witnessed an early run from 8.71-11.15 (+28%). That high represented a two-day increase of 157% over our observed low of 4.33, and was followed by some consolidation in the afternoon leading to a close at 8.60.

The company published another press release post-market divulging details of a forthcoming private placement (Link Below), that is untraded-upon. Thus, PTBI is gapping up once again today, so we will be wary of the possibility for more price action similar to what we’ve seen so far.

We’re going to put EXTR on our radars this week as a stock that was sent through the ringer after an analyst downgrade early last month, causing a big gap-down on the chart.

You can see it plainly on the snapshot we’ve included below. In addition, we can identify a couple of bullish indicators staring us in the face; the RSI is coming off of being oversold, while the MACD is upturned and showing divergence. The stock has been making higher highs and higher lows for two sessions running, and we’ll look for that to continue. 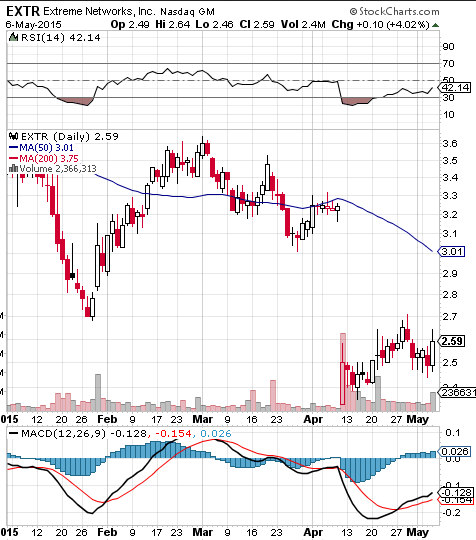 We also want to pay attention to GEVO after an interesting PR this morning that highlights an agreement with Alaska Airlines has sent the stock cruising to three-month highs in the premarket.

The chance for a dip-and-rip style play could present itself on the rebound after the profit-takers come out of the woodwork early in today’s session. For us to remain interested in GEVO, the stock will need to maintain support at or above its 50DMA of 3.23 on any pullback.