We entered NUGN into the mix on Friday as one to put on bottom-watch, and it instantly became the latest in a string of perfectly timed rebound plays. After taking an absolute beating during Thursday’s session, wherein the PPS decreased by roughly 40%, the stock displayed an absolute turnaround.

From its open at 2.65, NUGN made a very respectable 26% intraday move on relatively heavy volume, hitting 3.33 shortly after noon. It maintained the majority of those gains into the close (3.10), so we’ll be on the lookout for possible momentum carryover.

We’ve identified some of the key aspects of the NUGN chart here: 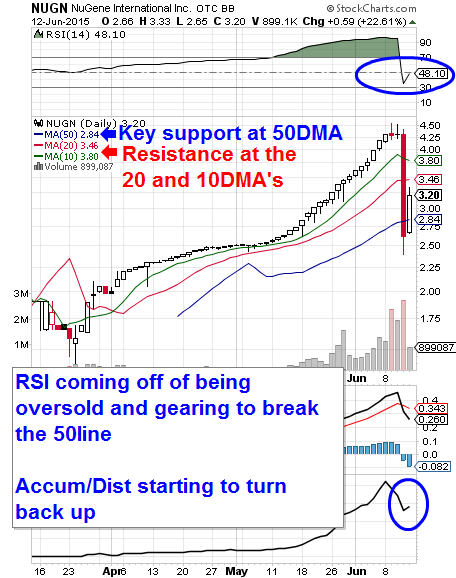 Adding to Our Radar:

We’ve got a few stocks we want to put on a speculative watch for various reasons as we kick things off this week:

Axion Power International, Inc. AXPW – This fresh news play is the first that we want to enter as a possible new item of interest. The stock is trading massive premarket volume as the company published an interesting PR this morning. Take a look>> READ PR

Trucept, Inc. TREP – This is a thinly-traded subpenny stock that is unusual due to its revenue-producing status. The company published its Q1 2015 financials this morning, so we want to tag this play for observation. An influx of volume could send TREP on a ride.

Indo Global Exchanges Pte Ltd. IGEX – This is a super-sub-penny momentum play for which we’ll want to reserve a spot on our watchlists. It’s began to trade up off of a relative bottom on Friday so we’ll be on the lookout for the possibility of some of that activity to spilling over into this week.

Enertopia Corp. ENRT – This is a stock that has been the subject of recent promotion. We’ve never mentioned it ourselves, but we want to put it on the radar today as it is coming off of quite a thrashing on Friday. There’s a chance it could present itself as a rebound play upon finding support.

In yesterday morning’s premarket report we took note of MDCN’s rebound off of a relative bottom, and speculated that the momentum built up in Tuesday’s session could carry over into added gains.

That certainly proved to be the case, as MDCN spiked heavily from its early low of .0024, running as high as .0039 shortly before 11:30AM. It marked an intraday move which provided gain opportunities of up to 62% before pulling back into the close of .0022.

We’ll go ahead and monitor this one for the remainder of the week for any potential bounce-play chances that might arise when it finds solid support. We’ll look for that to occur at or above Tuesday’s low of .0015.

ISIS appears to be in full-on breakout mode this morning, and as a result we thought we’d formulate an idea to take advantage of this via the options chain.

Given the current price and conditions caused by this morning’s catalyst (link to PR below), we’re going to be tracking the activity in the Weekly $70-73 Calls for potential intraday flip opportunities.

On Friday, in a stroke of flawless timing, we highlighted SOPW as a potential bottom-play. The stock had been in virtual freefall for the better part of the past month. The combination of that heavy overselling and a morning PR announcing a 6-month, $50M share buyback program earned the stock top billing in our premarket report. >>> READ PR

That performance firmly qualifies this play for continued observation this morning as it has effectively gone from a bottom play to a momentum play. We’ll want to be on the lookout for the possibility of some early profit-taking and consolidation, followed by a subsequent bounce.

AURI was a great play for us at the beginning of last week as it gave us an opportunity to bank gains of more than 100%. Following the huge spike, we left off on Tuesday by mentioning that we’d “keep our eyes on the price action as the week progresses” and it was a good thing that we didn’t let it slip off of our radar.

AURI came down to ultimately find support at .0027 on Thursday, and on Friday it surged back to a high of .0061, so anyone who continued to pay attention had the opportunity to take advantage of a 126% swing.

We also want to do a quick recap of PVSP’s performance from Tuesday to Thursday. We’ve covered this play quite a bit this spring, and on Monday, we warned our readers that another upswing could be in the making. We certainly did see one, as PVSP ripped from its low of .0009 on Tuesday past the penny-barrier to a high of .0015 just two sessions later; it marked an intraweek move of 66%

Moving forward, we’ll want to see the stock continue to build higher lows, ideally holding support at .001 on any pullbacks.