To close out the week on Friday, we floated a set of options ideas for the SPY, noting our immense success doing the same in the prior week. We decided to track the SPY Weekly $199.50-203 Calls.and a couple of the contracts within that range produced multiple intraday swings, giving sharp traders the chance at some tidy profits.

Placing ABHI on our extended watchlist on Friday turned out to be a great call. It was the first time we had ever mentioned the stock, which just so happened to be showing signs of life coming off of a recent 52-week low; just the type of play for which we’re constantly searching.

The reason for that was on full display as ABHI dipped back to a low of .0102 before registering a HOD of .015. That was good for an intraday swing of 47%

We began tracking HMLA on Thursday and witnessed a healthy 59% pop from a low of .00189 to .003 which, of course, we mentioned in Friday morning’s report.

On Friday we were treated to an even more impressive spike from the stock, as it extended its highs much further inside of the first 35 minutes of trading. It dipped back only slightly to .0022 and proceeded to shoot like a rocket to a high of .0044. That marked an intraday run of 83% and a two-session swing of 133% over our observed low on Thursday.

ESPR is a stock we’ve been familiar with in the past, and for the multiple reasons we’ve pointed out on the following chart snapshot, we’re going to submit some options-trading ideas to correspond with the setup. 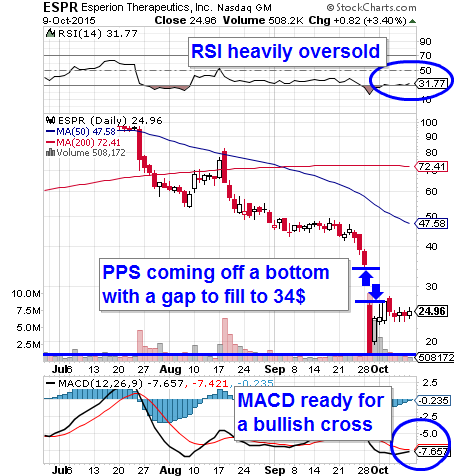 We want to radar contracts in the range of ESPR Weekly $26-31 Calls. The stock is gapping up over 15% this morning, partially filling that gap on the chart. It has traded as high as $30 in the premarket.

We tagged ZAZA last Thursday on the heels of an earnings beat, and at the time, we mentioned that we’d put the stock on watch for a classic dip-and-rip scenario.

While it took more than a full session for it to settle back and find support, it did so on Friday, bouncing off of the 2.87-mark. Yesterday ZAZA continued to trend off of that bottom and reached a subsequent high of 3.60. For us, that marks a three-day turnaround on ZAZA with possible gains of up to 25%

In order for us to remain interested in ZAZA, we’ll need to see support hold at or above the 50DMA of 3.24.

We also want to make mention of GERN, which we put on watch Friday after the company announced it had licensed its cancer treatment to a unit of Johnson & Johnson in a contract that could reportedly be worth up to $935 million.

After seeing a low of 2.72 from GERN initially on Friday, the stock began to rebound up to yesterday’s high of 3.10. (+14%) and appears to be gapping up slightly in the premarket today.

Folks might be interested in tuning in to the live webcast of GERN presenting at the Stifel 2014 Healthcare Conference in New York,  NY today at 1:50 p.m. EST. Webcast link can be found at GERN’s Website, HERE >>>

NV5 Holdings, Inc. NVEE
NVEE made a decent move during yesterday’s session, trading in a positive range from 10.60-12.40, offering up the chance for a 19% intraday gain.

Amicus Therapeutics, Inc. FOLD
Another modest yet notable mover came in the form of FOLD, which increased from a low of 6.22 and reached 7.10, a move of 14%

Part of our attention this morning will be given to TWTR, and, more specifically TWTR calls, as we’re catching the stock in the midst of rebounding off of it’s lowest price point since the end of July. The stock found support just shy of the $40-mark on Tuesday and registered higher lows and higher highs during yesterday’s session.

We’ll look to take advantage of a possible continuation of the trend using the TWTR options chain. The $42 and $43 weekly calls are going to be where we look for intraweek flip opportunities, and for a longer-term swing trade idea, we’ll track the December 12th $44 calls (Last Traded: 1.45). 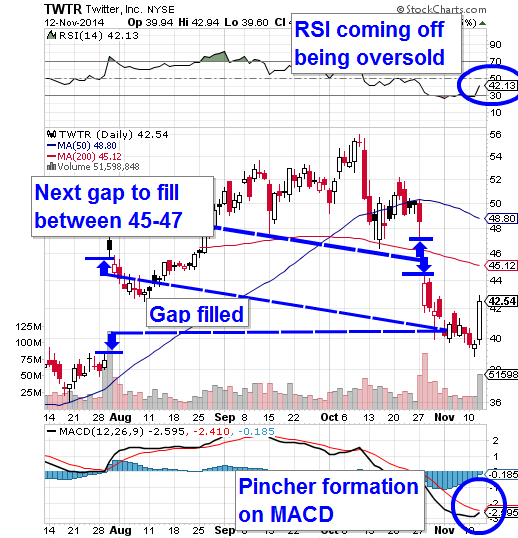 If TWTR can fill the remaining gap on the chart to the $47-range before 12/12 we could be looking at a 100% increase in those calls from here, so it’s going to be something we’ll pay close attention to over the next month.

ZAZA has us on alert this morning as well; the stock is gapping up heavily on a post-market earnings release that included some interesting figures. The company has a conference call scheduled to begin at 10:00AM EST >>> Listen In via Yahoo! Finance

We’re going to be monitoring this play for an early run-up on the untraded-upon earnings report, followed by a possible dip-and-rip scenario. We’ve sniped out rapid gains on both sides of the fence in situations just like this one, just by staying extra vigilant, so ZAZA will be another interesting play to follow as we close out the week.