While we most commonly look for short-term, quick-strike trading opportunities, every so often we’ll sneak in a longer-term play, and that’s just what we did on Tuesday of last week with BBLU.

BBLU had just begun to undergo a massive selloff with no prompt from a filing or news release. This caused us to take notice and tag the stock for extended observation. Our exact words were “We’ll go ahead and reserve a slot on our radar screens for BBLU with an extended bottom-watch designation. It’s far better to show up to the party early and be ready to strike immediately upon the slightest hint of a rebound.”

As it turns out, we were absolutely spot-on in our assessment of BBLU and how to approach it. After ultimately bottoming out at a low of .04 at the end of last week, the recovery has been a thing of beauty. BBLU caught fire and ran back to a subsequent high of .23, regaining its lost ground just as we suspected. That’s an incredible 475% swing!

As we point out on the chart below, things are still looking ripe for yet another leg-up, so we’ll keep a keen eye on BBLU in the sessions ahead. 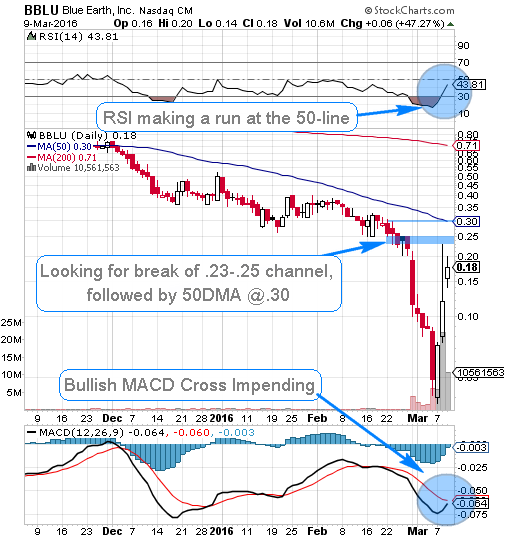 Speaking of bottom-plays, we have a couple of other familiar stocks that are just now trading at their own recent lows, and could be in line for recoveries.

We’ve been tagging them in our extended watchlists recently, and we’re going to have them both on a more intensive watch moving forward. 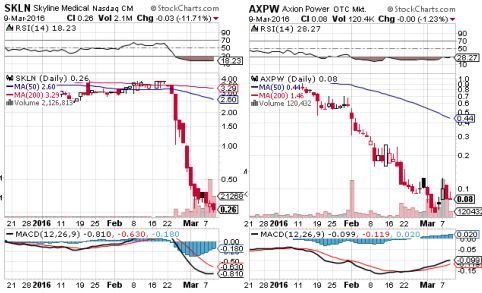 We’ll look to further our success with options plays this week with an idea we feel has good potential based on a favorable earnings report.

Dollar General, Inc. (DG) is gapping up this morning into the $79-range, so we’re going to be on the lookout for a possible dip-and-rip situation, whereupon we’ll be tracking DG Weekly $78-80.50 Calls for possible daytrade and/or swing trades into tomorrow’s session.

We’ll kick things off this morning by highlighting a few of our recently tracked plays that came by solid moves to the upside start the week off yesterday. In each case, we’ll be on the lookout for possible continued momentum on the heels of yesterday’s strong showings.

We were following USAR beginning on Wednesday of last week, and would observe a low of .0067 on that day. It has been off to the races in the four sessions since, as USAR streaked to a high of .0148 during yesterday’s session. That’s a hefty rise of 121%

SCIE was another of our interests from last Wednesday’s report, and it too has performed superbly in ensuing sessions. The total gain on this stock has also gone into double-bagger territory as it rose from Wednesday’s low of .001 to a new high of .0021 yesterday; a 110% jump.

We’re quite intrigued by the massive selloff undergone by BBLU between Friday and Monday without so much as a fluff PR, or negative filing to explain the dramatic losses. The stock is now trading at all-time lows, and as our regular readers are surely aware, this is exactly the type of situation for which we’re constantly scanning. 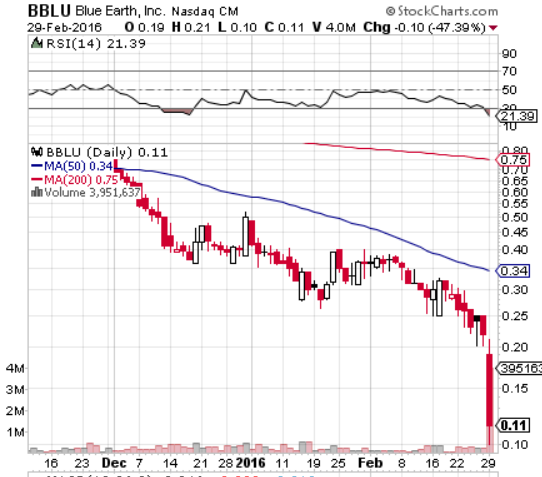 We’ll go ahead and reserve a slot on our radar screens for BBLU with an extended bottom-watch designation. It’s far better to show up to the party early and be ready to strike immediately upon the slightest hint of a rebound, than to wait until it has occurred, and more opportunistic traders have already reaped most of the rewards.

Finally, we’ve got some longer-term options ideas relating to stocks we’ve been very familiar with in the past, that are now beginning to show signs of recovery off of recent bottoms. We’re going to signal  PBR 04/01 $4 Calls and WTW 04/01 $13 Calls  and keep them on a close watch in sessions to come.

So far we’ve been very happy with the way PZOO has performed since we brought it into the mix to start the week. Our assertion that the PZOO chart was on the cusp of making a nice move proved accurate; after starting out at a low of .0225 on Monday, the stock broke through its 50DMA and traded as high as .031 during yesterday’s session (+38%).

Volume picked up as well, with the stock trading 2.6M shares on the day, which works out to more than 3.5X the 3-month average.

So this new play that has us interested on a long-term basis (for reasons stated in our initial report) has also shown that it has some real short-term potential as well. We also caught a fresh PR this morning, which you’ll find below the following snapshot of the PZOO chart: 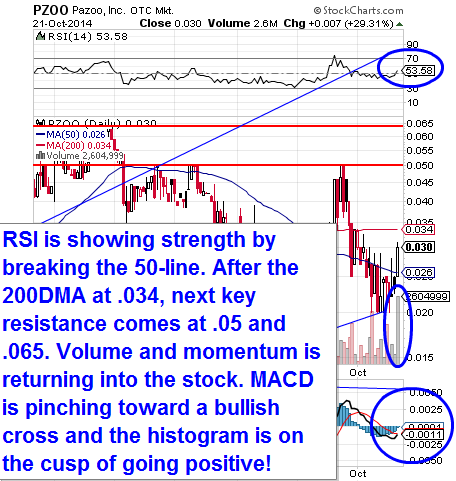 MA & Associates, LLC felt it necessary to begin the build-out of the testing facility and to begin hiring all necessary personnel prior to the State of Nevada issuing licenses to qualified applicants on November 3rd >> FULL PR

PZOO is dually involved with the continued development of its health and wellness online portal at PAZOO.COM as well as its majority stake in a medical marijuana testing firm in Nevada. For those who might have missed our special report on the stock Monday, you can find a copy here: PZOO REPORT

We also want to touch briefly on our ongoing interest in other medical and legal marijuana plays. For over two years we’ve tracked, and continue to monitor the sector as a whole, with huge winners coming in the form of MJNA, CBIS, HEMP, GRNH, TRTC, ERBB, and so many others.

We recently reminded everyone that we’d be on the lookout for the cannabis space to heat up as we approach a voting season with an unprecedented number of marijuana initiatives on ballots across the country.

This Monday, a federal court will hear evidence contesting that the US Government’s classification of marijuana as a Schedule 1 substance (which ridiculously makes it equal to heroin in the eyes of federal law) is unfounded. Several doctors are prepared to challenge the scientific and medical validity of government claims. If truth and reason win the day, it could be a big step toward  furthering the cause of cannabis acceptance nationwide. >>> READ ARTICLE