We’re swinging back around today to relay the new PR released by Aureus this morning. For those of our readers who may not have read the report that we published on Monday morning, you can find it right here. It outlines the most recent announcements from the company which would give more context to this morning’s announcement.

The company is reporting its progress with regard to marketing and the status of its Metro Atlanta project that intends to see just under two dozen “Micro Markets” established around the city.

“We have multi-pronged marketing effort for our new Micro Market enterprise that includes, direct mail, telemarketing, Google Ads, and outside sales/locators.

These efforts have been layered in over the last few weeks. We have seen progress coming from the Website/Google Ads which have been running for 3 weeks. The leads produced are being followed up on.

Last week, we sent 1000 direct mailers to businesses that were targets in the metro area. This week, we established a great location from that mailer; more to follow on that.

The most immediately successful effort is the outside sales and locators. Our new outside salesperson came on board this week. In addition, we brought in two professional contract locators. As of the end of business on Tuesday, they had secured three additional new locations, with one of those being a multi-unit installation in a single business. The sales staff also has a high level of confidence on another three, as of Wednesday morning. At this rate, we expect to have homes for the first ten units we purchased by the end of the month. These will be physically deployed in the coming weeks.” Stated CEO Everett Dickson. (>>Read Full PR via OTC Markets)

We also have new ranges and possible gains on the bearish options ideas we’ve been tracking since Tuesday. The markets at large took a significant downturn during the day yesterday and provided for some more nice moves in these targets:

The fresh idea that we produced in yesterday’s morning report was a rousing success. We had our sights set on MDVN Weekly $41.50-43.50 Calls as outlined in our watchlist, and from within that range came multiple chances for outstanding intraday gains.

The stock is gapping up drastically in the premarket, so we expect it to add to those gains this morning.

ProShares Ultra VIX Short-Term Futures UVXY – The markets don’t seem to be responding well to the new jobs figures. Our related target is going to be Weekly UVXY $19-21 Calls*.

*Don’t forget, trading weekly options on Friday is very risky. Not to be attempted if you’re anything less than an expert trader!

Yesterday morning, we gave our readers a heads-up on four big board plays that were trading at relative bottoms that we wanted to watch for rebound activity. While it was the most pronounced in SKYS, all four of them produced some level of intraday upswing.

Sky Solar Holdings Ltd. SKYS – As we said, the clear winner for the session was SKYS which rode a wave of upward momentum from a morning low of 1.30 to a subsequent high of 2.58. That gave anyone who caught our alert a chance at gains of up to 98% on the day! The ranges and gains on the remaining trio of bottom plays were as follows:

We’ll leave all four on our radars in sessions to come to spy for signs of continued recoveries, with the recording of higher lows and higher highs.

We also had SFOR come off of our extended watchlist to put up a solid session. The stock ran from a low of .0007 and reached .0013 for an 86% intraday rip.

Latest From the Chatroom

As many of you already know, we conduct daily live traders chats via Skype, and one of our valued participants produced another bigtime winner yesterday. DJ was at it again with his knack for sussing out hidden gems, and the whole group benefited. 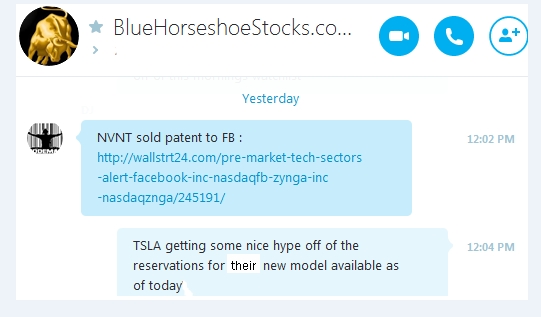 If this isn’t an example of why we urge our readers to get involved with the chats nothing is, so do yourself a favor and send a Skype contact request to username stocksumo and start participating today!

Yesterday, we had just about the most successful day of 2016 so far in terms of the sheer number of red-hot movers we tagged in our premarket report. We went from the monumental options success of earlier sessions, to spotting some prime opportunities in the stock arena.

We let our readers know they could expect “some potential bounceplay action” from AGTK yesterday after we had tracked it over a 100% pop (.003-.006) and subsequent pullback toward the end of the previous session. We got exactly the type of behavior we expected from the stock, as AGTK piled on another excellent performance.

The stock traded in a daily range from .0032-.0048 for a solid 50% intraday surge, and unlike the previous day’s activity, it managed to hold a vast majority of the day’s advance into the close.

DNRG has appeared in our reports repeatedly in the past and after re-tagging it in yesterday’s watchlist, we were pleased to see the subsequent activity in the stock. It traded up from a daily low of .024, going to hit .035 for a 46% intraday upswing.

Like the aforementioned play, it too demonstrated strength into the market close, ending on its high-of-day and thus qualifying it to remain on our radars as a possible momentum play.

No sooner than we got the chance to congratulate readers who caught our alert of PKGM the Friday before last on the amazing run it produced (.0031-.013, +319%), did the stock turn in yet another winning card.

From its low-of-day at .0105, the stock took off on a run from which it did not look back as it surged past the two-cent mark to log a high of .0205. That worked out to an intraday romp of 95% and extended our total observed range on PKGM to 561% in just a week-and-a-half! The move came on the heels of some acquisition news (>>View PR)

Last but not least among our excellent selections from yesterday’s morning report was SPWZ. This was a first-time mention for us, and the stock provided a heck of an introduction!

We watched as SPWZ launched from an early low of .25 and ended up at a high of .44 for possible intraday gains up to 76% Like each of the previously mentioned plays, it held a healthy amount of that advance into the close.

We took notice of SCTY’s earnings miss today and immediately were struck with a potential options idea. The stock, which has already been under duress all this month, looks set to get kicked once again.

The activity is fueling our attraction to the possibilities that could be provided by the SCTY Weekly $19-17 Puts. We’ll throw these up on our tracking board for potential intraday/intraweek swing-trade chances.