With the markets ripping again yesterday, one of the options ideas we had zeroed in on produced some really nice gain opportunities for us. We signaled the CAG 07/02 $33.50-34.50 Calls, and two out of three of those contracts logged double-bag gains on the day.

Here are the total ranges and possible profits that these calls provided:

On OCX yesterday, we noticed a drastic change as the stock fell off a cliff on news that it would discontinue development of its DetermaDx liquid biopsy test. Purely from a technical perspective, we have to take notice when a stock gets chopped by half and falls to near annual lows in one session.

It leaves a lot of future opportunity for a bounceback on the table, so we’re going to signal a long term idea in the options chain, and begin monitoring the OCX 11/20 $2.50 Calls.

On an otherwise relatively quiet day, we observed a nice move in BCEI, a stock we’ve been tracking routinely for quite some time. The most recent occasion upon which we mentioned the stock was a few weeks back on August 18th, and we subsequently observed a low of .81.

Yesterday’s  move from 1.19 up to a new high of 1.41 was not only an intraday push of 18% but it also represented a total upswing of 74% over our observed low. It has been a fairly steady incline over the past ten sessions or so, and we’ll continue to monitor it higher highs and higher lows.

Signal Bay, Inc. SGBY – We alerted our readers to our interest in SGBY on Tuesday, and the entire week has been a a continual uptrend as it has recorded higher highs and higher lows every single day.

Enteromedics, Inc. ETRM – We’ve got a history with ETRM that literally stretches back for years, and yesterday thought to re-signal the stock as it was showing a hint of life coming off of the new 52-week low it established just this week.

We mentioned that we’re going to keep an eye on it for a recovery over an extended period, but it fared pretty well in the short-term also, with a nice 21% move from .1383-.167. We’ll continue to track it for higher highs and higher lows in sessions to come.

We spotted a possible subpenny bottom-play in INVU. It registered a new 52-week low of .0025 last week, traded in a daily range from .0031 up to .0041 yesterday, with accumulation/distribution picking up considerably in recent sessions.  We’re going to keep watch over this one for signs of a recovery off of these lows. 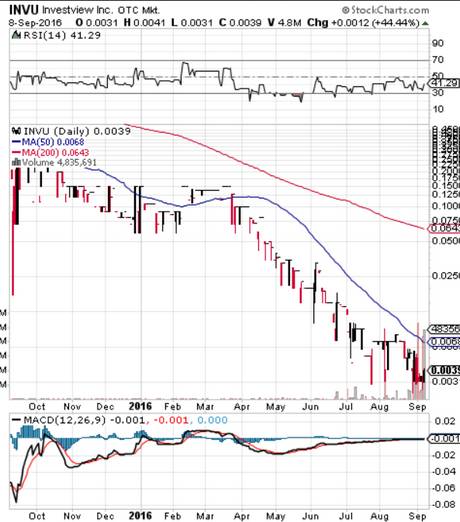 Good morning, Traders! Before we jump into today’s report- it’s February 29th- so we’d like to wish our readers a Happy Leap Day! On this, the rarest of occasions, we thought it’d be interesting to use our archives to do a four year time-warp back to the last leap day and see what we were talking about.

It turns out that we had signaled Energy Recovery, Inc. ERII as a bottom-play opportunity on the morning of February 29th, 2012, and it  turned into one heck of a long-term idea. The stock actually ran from it’s then-price in the 2.50-range to nearly 8.00 over the course of the next two years! 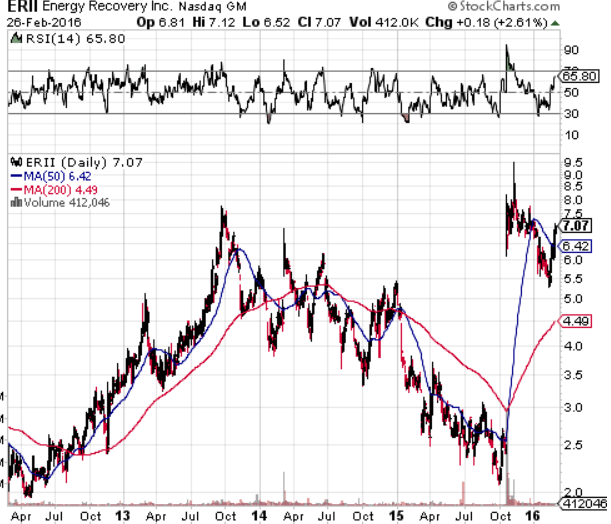 Flash forward to the current situation; ERII has been trending upward for the past two weeks solid, after having just announced an upcoming share buyback program a few weeks prior to that (>>View PR). Meanwhile, we have an RSI heading toward the power zone, and a MACD (not pictured) showing sharp upward divergence. We’ll monitor the stock in coming sessions on the chance that it continues the nice head of steam it has built up at the moment.

We first introduced IORG to our reports two Fridays ago, when the stock was trading as low as .62, and it has since gone on to reach a high of .88. This 42% rise came on relatively light volume. Given that IORG has such a low float (just 14.4M shares outstanding) it’s possible that only a slight amount of buying pressure can effect even larger gains than we’ve seen thus far, so we’ll have an eye peeled for increased activity.

PVHO first began appearing in our reports a few weeks back, and has continued to do so with regularity. On the day of our initial mention we observed a PPS of .084, and subsequent high of .18 (+114%). That was followed by an eventual dip back to .106 before rocketing to a new high of .25 (+136%). We’ll continue to track PVHO as long as it keeps inching its way up the chart.

Among our options daytrading ideas from Friday morning’s report, one stands tall among all the others. The PANW Weekly $147 Calls ran from .10-2.00 for an incredible 1900% rip, marking not the first or second, but *third* gainer of 1500% or more for the week!