After an impressive run of tracking multiple winning stock plays in recent sessions, we got back to some options-trading ideas with YHOO yesterday morning and were quite pleased with the result.

YHOO was gapping up early on speculation of a possible sale of its core web business, and we were looking for a way to take advantage of the hustle and bustle. Our signaled range was the YHOO Weekly $34-35.50 Calls and big intraday returns in each set of contracts were there for the taking:

It’s worthwhile to mention that big gains were also possible at higher strike prices, and it became apparent very early on. We mentioned this in our chatroom*, and members had the chance at up to 120% gains as the $36 Calls ran from .36-80.

CDII was among a group of plays that we put on our radars at the beginning of the short holiday week that have been jumping off of the page with big gains this week. One of our valued chatroom* participants, DJ, reminded everyone yesterday prior to the opening bell that there was activity in CDII (snapshot below) and everyone had to hold onto their hats from there!

What ensued was a monster run from .0019 to .07, which represents an unreal 3584% intraday romp. The news contained the announcement of a $350M purchase order, and traders went wild trying to soak up shares in what ultimately amounted to a dream-scenario.

We’ll be very interested to continue to track the stock moving forward. After its epic run it pulled back considerably into the close and is currently gapping once again in the premarket to the .035 area. We’ll continue to be interested provided it can hold a minimum of .03 as support once things get going this morning. Ideally we’d like to see the stock break through .04 once again and maintain that as a new level of support.

*We encourage anyone who’d like to get involved with our traders chats, simply send a Skype contact request to username ‘stocksumo’. We’d be happy to let any of our faithful readers get in on the fun!

We tagged TTCM for observation in yesterday’s extended watchlist, and the stock went on to carve out a solid 30% run from .03 to .039. It pulled back only slightly into the close at .035, and did so on roughly twice the monthly average volume.  It also marked the second day of higher recorded highs and lows for the stock, so we’ll continue to track TTCM provided it can sustain that trend.

Our closing thoughts in Friday’s premarket report included some options ideas pertaining to our bullish feelings on AAPL and the SPY.

Specifically, we targeted SPY Weekly $193-194.50 Calls, and AAPL Weekly $115 and $116 Calls and included the following warning: “Trading options with a weekly expiration on a Friday carries an inherently elevated risk-reward factor, and is certainly not for the faint-of-heart, or beginning traders.” That would have been an important thing to remember, because the markets did pull back toward the end of the day, eventually rendering those contracts worthless, but not before opportunities for some big intraday gains were presented.

We also had some successful ideas going in the opposite direction; our bearish sentiment on HRTX paid some excellent dividends via the options chain last week, as we were mentioning on Friday. The stock continued to backslide into the close, reaching the $30-range with a daily low of 30.06. From our observed high of 42.25 at the time of our initial alert last Wednesday that’s roughly a 30% loss.

It will be interesting to see if this morning’s PR from HRTX affects the dynamics of the chart.

We also want to make another quick mention of CCTC, which has continually set new highs for us in the month of September.

We tracked the stock to some more nice gains last week, as it made a healthy intraday move of 21% from .72 to .87. That extends the total range we’ve observed following our initial alerts earlier this month from a low of .36 to Friday’s high; a total move of 142% in just two weeks’ time.

We tagged this old familiar play on Friday for the first time since spring, and it turned out to be fortuitous timing as the stock made a noteworthy intraday jump.  THCZ traded from a low of .09 up as high as .1189, a 32% spike.

We’ll begin to pay closer attention to this and other cannabis-related stocks as election time draws nearer and the issue of marijuana is once again tested on ballots. We’ll be open to the possibility of new waves of attention for the sector as a whole, and be sure to keep our ear to the tracks for relevant developments.

A failure to beat Wall Street’s expectations on both guidance and earnings led PIR to gap down on Friday, though the dip wasn’t sustained. After seeing a low of 6.84 the stock did manage to recover quite a bit of ground into a 7.61 close. This transpired at a time when the chart was already fairly oversold, and that effect has been magnified as we point out on the chart snapshot below.

We’re going to have PIR on an extended-term recovery watch. A return to even the 50DMA would spell significant gains from the current juncture. 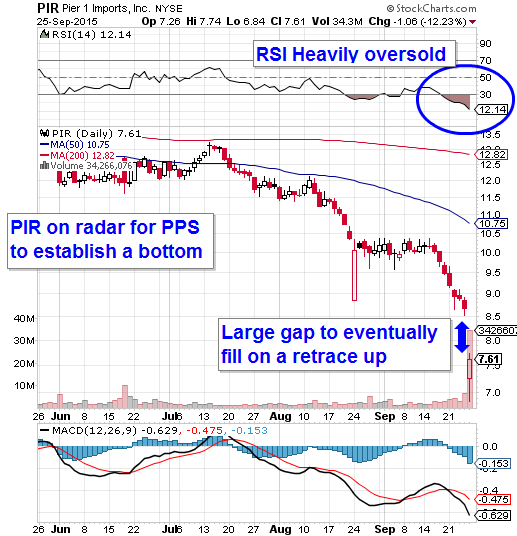 ONTX is hitting the scanner as a premarket gapper this morning, on the heels of a PR announcing a “pivotal” Phase III drug trial. (>>View PR)

The stock’s 1-year analyst price target of $5 doesn’t seem all that far-fetched, especially if ONTX can break past resistance in the channel between 3.00-3.25 as we’ve outlined on the following chart snapshot. Also looking ripe are the RSI which is creeping toward the 50-line, and the MACD in the midst of bullish cross.

We’ll continue to keep an eye on the stock today and into next week. 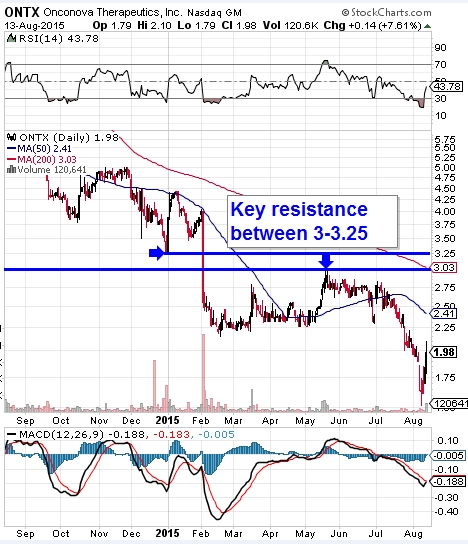 To carry on our recent tradition of presenting weekly options ideas on Friday (which has yielded us some truly epic gains), we have TSLA. Remember, trading weekly contracts so close to expiration carries added risk, so we always need to exercise extra caution when doing so.

The stock is responding well to news that the company’s share offering would be increased to nearly 2.7M shares, or $642.5M. As a result of this increased activity, we’ve identified the range in which the heaviest action is likely to occur in the event of a sustained uptrend.

Our main target area will be TSLA Weekly $242.50-247.50 Calls. We’ll of course begin with the lowest strike price, which is currently in the money, and roll it up from there as needed, depending on how the day’s trading activity unfolds.

Pacific Sunwear of California, Inc. PSUN – We also want to quickly make mention of PSUN, which we’ve noticed has come down to new 52-week lows. As our regulars our well aware by now, these sorts of plays have been an area of extreme success lately. Just take a look at the chart to see what we mean. This is a stock that is sorely due for a rebound, and we intend to be watching closely for when that occurs. 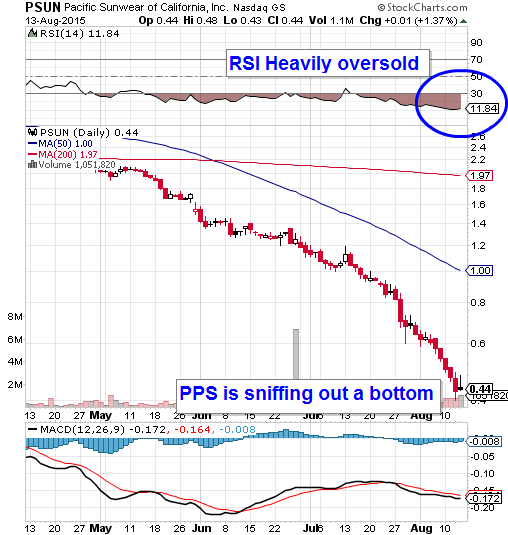