Here’s another multi-day momentum play that we’ve been tracking very closely. We first alerted APTY the the Friday before last, observing a low of .0036 at the time. By Friday morning, at which time we specified that we’d be tracking this play into this week, the stock had reached a high of .0125 (+247%).

Our decision to remain interested in the play paid dividends once again, as APTY had another exceedingly strong session Friday afternoon, running up another 65% intraday from .0099 to a new high of .0164. It marked an overall move of 356% in just a six-session span, so a big congrats goes out to any of our readers who were able to use this momentum-mover to their advantage.

When we tagged NVAX in last Monday morning’s report we had a pretty good indication that the stock was in line for a significant rebound, and our expectations have been met at every turn. The stock has now strung together an impressive five consecutive sessions wherein a new high was achieved.

The stock traded in a modest daily range from 2.17-2.41, and from the low we witnessed a week ago today, that new upper limit has extended our potential gains on this play in the same time frame to a highly respectable 77%

As long as NVAX continues to achieve higher highs and higher lows, it will be afforded a slot on our watchscreens.

Speaking of momentum plays, we tagged AIII in Tuesday morning’s premarket report, as a potential bottom-bounce candidate, and it too achieved higher highs and higher lows every single day following our initial flag.

The low we saw on Tuesday was 1.0194, and the subsequent recovery took it to a high of 1.42; a comparatively modest, yet still healthy 39% Just like the above-mentioned plays, AIII did enough throughout the course of last week to keep us interested in continuing to track its progress.

SGBY was a solid call from yesterday morning’s premarket report, as the stock continued a run that began on Thursday, and continued to go strong. We watched as SGBY traded in a daily range from .003 on up to .0042, for a very respectable intraday run of 40%

We’ll look for the stock to set a higher low today, maintaining a level greater than yesterday’s swing low, and the next key area of resistance is sitting at .0052.

We tagged VNOM for observation on Friday, along with a corresponding options trading idea. Our interests were the 09/16 $15 and $17.50 Calls, and while the $15’s didn’t see appreciable levels of volume, the 17.50’s have made quite a nice move over the preceding two sessions.

VNOM will be trying for its sixth straight trading day posting higher highs and higher lows today, and with several weeks remaining until the expiration of those contracts, we’ll be interested in tracking this play further in sessions to come.

We want to highlight BBRG this morning as a potential bottom-bouncer. This stock fell off an absolute cliff a few sessions back following a disappointing Q2 earnings report, and after settling into a new 52-week low on Friday, appears to have begun showing some bounce activity.

We always tag plays like these when we run across them, as they have often turned into solid recovery plays for us in the past.

We placed SVTE on watch in Tuesday morning‘s report and have been rewarded with an amazing two-day run that has carried it from subpenny territory, straight into Pennyland.

The move we observed on Tuesday was a relatively modest 41% from the low of .0039 to the closing price of .0055, but yesterday, things really kicked into high gear.

SVTE opened up at that .0055 price-point and took off like a bat out of hell, reaching its impressive new high of .0188 shortly before 1PM. It marked an excellent intraday upswing of 242%, and boosted our two-session observed range to a laudable 382% Cheers to anyone who caught a piece of the action!

We’ve been exceedingly pleased with PKGM’s performance in the couple of weeks we’ve been tracking the stock, after having observed more than a 560% swing.

Yesterday brought yet another chance to make quick-strike profits off of this play from the outset of the session, as it quickly performed a dip-and-rip from the daily low of .0128 to the high of .0195 (+52%) in the first half hour of trading.

A secondary opportunity was afforded to those that continued to watch intently as PKGM came down to find support and make a solid rebound from .014 back to .018 in the closing minutes of the session. That amounted to an added 29% swing, and the stock closed just a tick below at .017. We’ll look for it to maintain support above yesterday’s swing-low in order for it to keep our interest moving forward.

We also want to provide a quick update on SALE, which we tagged as a bottom-watch play in yesterday’s premarket report. After taking an absolute beating over a poor earnings release, our timing in calling the bottom couldn’t have been much better as is evident on the snapshot below.

We’ve had luck in the past with stocks in these situations where investor disappointment leads to a knee-jerk selloff.  We’re going to leave SALE on our radars in the sessions to come, on the possibility that a protracted rebound is forthcoming. 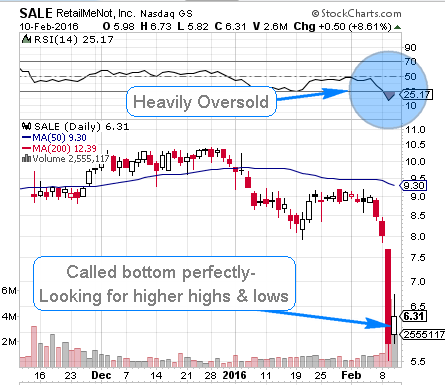