We want to submit PVCT as a potential bottom-play candidate this morning after noticing the stock register a new annual low last week, followed by the recording of higher lows in the two sessions that followed.

We’re going to place the stock on watch for the possibility of an extended rebound, which would certainly be long overdue. 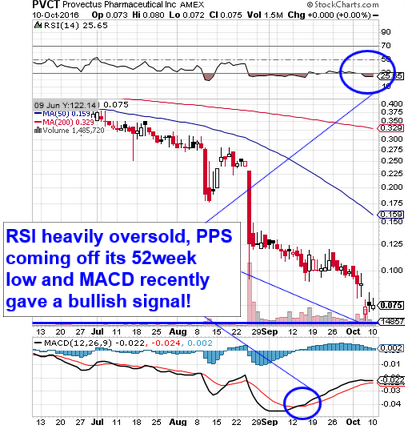 After a disappointing earnings call this morning leading to a gap-down, compounded with the chart having been on the toppy side to begin with, we may be looking to go short on Alcoa, and the way we do that is by formulating some options trading targets.

The ones we’re particularly interested in are the AA Weekly $32-30 Puts, which could be in line for significant moves to the upside if the stock continues to lose ground once the session commences.

GRNH, like several other stocks operating in the cannabis space, has been seeing increased activity of late. We’ve experienced this trend leading up to elections in previous years, and especially with a major vote for recreational usage coming up in California less than a month from now, we’re going to plan on keeping a close eye on anything tied to the sector until further notice.

After signaling GRNH in a report last week and observing a subsequent low of .0651, the stock continued to make appreciable moves to the upside, trading up from .0815 to .09518 (+17%) yesterday, and an overall 41% increase.

MYDX appeared in our report yesterday for the first time in awhile, and the stock made a solid intraday increase for us.

From a low of .0258 it reached as high as .034, a 32% rise. The move occurred on more than twice the monthly average volume, and the PPS only slid back to .0329 into the close, so we’ll certainly want to keep monitoring MYDX for further opportunities as the week progresses.

RAS was a point of focus in yesterday’s premarket report. We highlighted it as a stock that had been hammered back for the better part of the past two months, which was long overdue for a rebound.

Timing just doesn’t get any better, with RAS having just registered a brand new 52-week low in the previous session, the reversal we were after occurred as the stock traded in a daily range from a low of 2.30 on up to 2.57. While only a modest 12% increase, we’ll be very interested to continue monitoring RAS in impending sessions. The stock closed just a few pennies below the HOD on roughly 4.5X the 3-month average volume.

We’ll look for RAS to keep logging higher lows and establish a sustained recovery, and remember, there’s a gap on the chart beginning at around 3.15, the filling of which would put the price back at $4.

There’s an unusual amount of excitement surrounding Disney this week, with Star Wars: The Force Awakens, the seventh movie in the Star Wars franchise set to hit theaters on Friday.

Add in the recent revelation that Alibaba (BABA) has teamed up with the company to distribute Disney films in China through a new device called DisneyLife, and we’re very interested in the potential activity these events could fuel in the DIS options chain.

As a result, we want to track contracts in the range of Weekly DIS $112-116 Calls for quick-strike chances, to try and take advantage of the current excitement. The stock is gapping up significantly in the premarket, so we’ll be on the lookout for an early dip-and-rip.