BioNovelus, Inc. ONOV -In April ONOV, back when the stock was trading in the subpenny range. (.006) We’ve been hot on its trail since then, and the PPS rise has been absolutely exponential. We included it in yesterday morning’s watchlist, and it responded with yet another solid intraday performance ( .51-.715, +40%), while setting an eye-popping new high that extended our observed range to ridiculous proportions. From the low we witnessed subsequent to our first mention of ONOV this spring, the stock has exploded to a dizzying 11,817%

SkyPeople Fruit Juice, Inc. SPU –  SPU has been on its eye opening run almost the entire time we’ve been tracking it since the Friday before last. We witnessed shares changing hands at 4.00 that day, and yesterday marked the sixth consecutive session that the stock achieved a new high.

This time the intraday run carried it 30% from 16.16, all the way up to 20.95. It represented a total increase of 424% that we’ve observed in just over a week, during which time we’ve tried to make certain all of our readers were aware of the situation. We’ve now mentioned the stock five times in that span.
______

We took notice of TPIY yesterday when the stock broke through a key prior resistance point at .0295, along with a breach of the 50DMA (.02). We want to see those both hold as support on any pullbacks, with .04 being the next key resistance we would like to see broken. 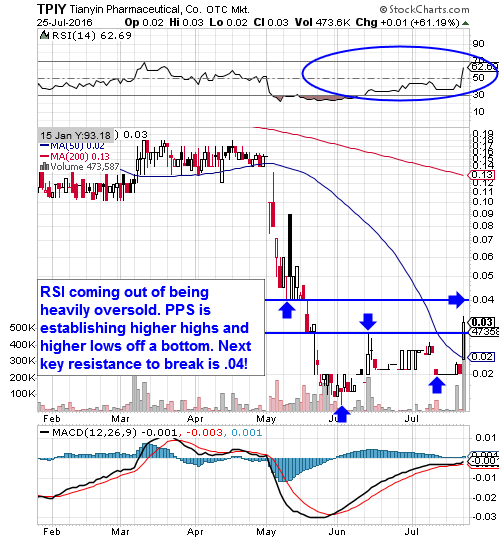 In the wake of an untraded-upon post-market earnings beat for Texas Instruments yesterday, we’re going to be focusing in on a range of call contracts to potentially take advantage of any upward momentum the stock should encounter this week as a result. Our target range is going to include the TXN Weekly $70-72 Calls.