Dussault Apparel, Inc. DUSS
–
Our first alert on DUSS came last Wednesday the 16th, at which point the stock jumped from .001-.0015, giving us the chance at intraday gains of up to 50%  DUSS would repeat this action the following day, once again bouncing from .001 to .0015.

We had DUSS on our watchlist once again on the 23rd following a sell-off from previous highs, and were just in time to catch a low of .0009, and watch the stock jump 44% to yesterday’s close at .0013. Highly volatile plays like this one are not for the faint-of-heart, and while extreme caution should be employed in trading such stocks, it’s plain to see that they can also facilitate a multitude of rapid-gain opportunities. 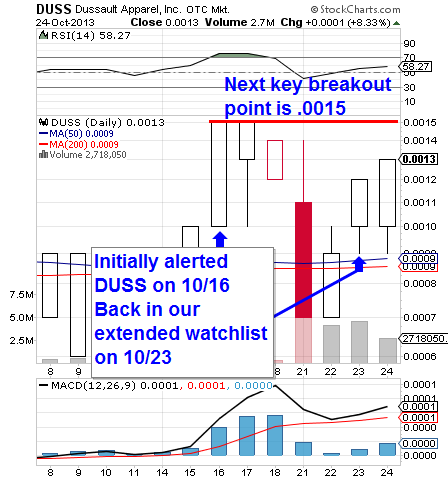 On Tuesday, we talked about moving our strike price closer to the money, while AAPL was trading in the high $520’s; we then saw a pullback to $508, and traders could have jumped into the $525 contracts at a deep discount. They went as low as 9.50, and yesterday touched a 19.70 high en route to a strong close at 19.35.

That’s the second time in the past week that our options ideas have yielded possible gains in the triple digits.We are going to stay on top of Apple as the earnings release on the 28th approaches. Historically, the stock has a tendency to run into earnings announcements in addition to high volatility on the day of release. We’ll be ready and waiting to time our plays accordingly.

We caught STWG on a volume scan back in December of last year. In subsequent months it ended up showing us a huge move from sub-penny levels up to .02, and presenting the chance at quadruple-digit gains, as some of our long-time readers might remember.

We are looking toward STWG once again, as it seems momentum has been picking up recently; volume has been increasing and accumulation is at an all-time high. We are going to be monitoring for a move past that previous swing-high at .02, which would trigger a blue sky breakout. 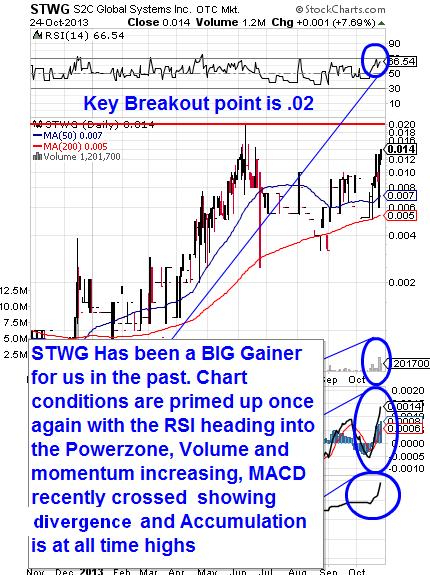 BARCHART.COM currently lists STWG with 100% “Buy” Ratings in both the short and medium term.

At the time of our most recent alert (Jun.14th) we were marveling at the stock’s run from our first ever alert at .0055, to the high at the time, of .09. At that point we had already acheived gains of more than 1500% off of CLNO. But the stock wasn’t done yet. On Friday it reached a high of .148, adding a chance for another 64%

From the original alert price at .0055 (Called in March), Friday’s high represents an astonishing move of 2590% in just over three months.

We prepared a video presentation of the current CLNO chart:

STWG has been consolidating recently after hitting a two-cent, 52-week high on June 10th. Over the past five sessions, the stock has been maintaining support at .008, just above a previous resistance level at .0076.

The last time we mentioned STWG, we stated that the company was working toward going current on OTCMarkets.com, and that we expected to see that happen soon. STWG has in fact managed to bring itself up to speed just as we anticipated.

We prepared a video chart for this one as well:

The volatility in the market since the Fed made its statement in reference to rising interest rate, and the tapering of quantitative easing has been substantial. Whenever we see conditions like these, it makes for some very nice options-trading opportunities.

Bio-Matrix Scientific Group, Inc. BMSN
BMSN is an old-time favorite of ours, that we’ve most recently mentioned in both Friday and Monday‘s extended watchlists. On Friday, the stock was as low as .0032, which, at yesterday’s .0048 high, marked a two-session spike of 50% BMSN managed to get above the 200DMA, and broke above resistance at a recent swing high (05/06/13 @.0045). The next key resistance comes at .0062.

Side Note:
Also included in Friday’s report with BMSN was Entest Biomedical, Inc. (ENTB). The two companies are headed up by the same management team. After trading as low as .0019 yesterday, ENTB also made a run, closing at its high of .0026, a 37% move. We’ll be monitoring for a continuation of that momentum this morning.

NewLead Holdings Ltd. NEWL
Speaking of momentum plays, here’s one fresh off our morning scan: NEWL was rebounding off of a recent 52-week low and having a breakout session yesterday. The stock closed at its high of day, and even continued its ascent after-hours. We are going to want to watch this mover into today’s trading. Momentum like that often produces extended multi-day runs, and if that is the case here, we’ll want to take full advantage.

Kandi Technolgies Group, Inc. KNDI & Other EW Winners
We also wanted to give ourselves a hearty pat on the back for our timely inclusion of KNDI in yesterday’s Extended Watchlist. This NASDAQ-traded stock made quite an impressive daily run for a security in this its price-range, trading from a low of 7.20 up to 8.31, gaining 15% on the day.

Other gainers on the day from yesterday’s win-filled extended watchlist include OSH, IGLD, & RNN.