Another Great Week in Options Trading

If you follow our reports and performance closely, you’ll know that we consistently deliver multiple solid quick-strike options ideas on a weekly basis, and this week has been no exception.

Our premarket report yesterday included fresh near-term targets for AMD and UBER, which both produced chances for significant intraday profits, which were as follows:

It wouldn’t be a full-fledged Friday morning report without a couple of new ideas to carry us down the home stretch on another great trading week, and into the next. Here’s what’s hitting our scanner this morning:

*We’re also going to radar GHST, thanks to our faithful subscriber, Mark!

The big winner from yesterday’s report turned out to be CLTX. We tagged the stock after catching it on a routine news scan; the company announced an all-stock exchange agreement with Volution Immuno Pharmaceuticals in which CLTX will absorb the company as a wholly-owned subsidiary, and form a new company aimed at developing treatments for a range of rare and orphan autoimmune and inflammatory diseases >> READ PR

Back in February, a bleak annual report led CLTX to fall off of a cliff, tumbling from the $6+ range down to roughly a dollar. Over the next several months, the stock continued to trend downward, culminating in a 52-week low of .40 at the end of May. Since that time, it received a little boost, rising to the .60-range.

That’s where we came upon it yesterday, and it was fortunate that we began paying attention when we did. After dipping to a daily low of .5012, the stock ran into the close, reaching a high of .68; a solid 36% intraday move. The late boost of momentum is carrying over into the premarket today, with CLTX hitting an early high of .99. From our observed low yesterday, that’s a 98% swing.

We’ll look for it to continue to build its base with higher lows, and to potentially crack through resistance into dollar-territory.

ELY is contributing to the newsreel this morning, announcing the signing of a highly talented young golfer. Upon taking notice of this, we’ve also seen that ELY has been building a heck of a chart setup over the past few sessions.

The stock has registered higher lows for each of the last four consecutive trading sessions, and is exhibiting a great deal of promise with regard to a number of bullish signals on the chart that we’ve pointed out on the snapshot below. Between that, and it being the peak of golf season, we’ll be paying close attention to ELY. 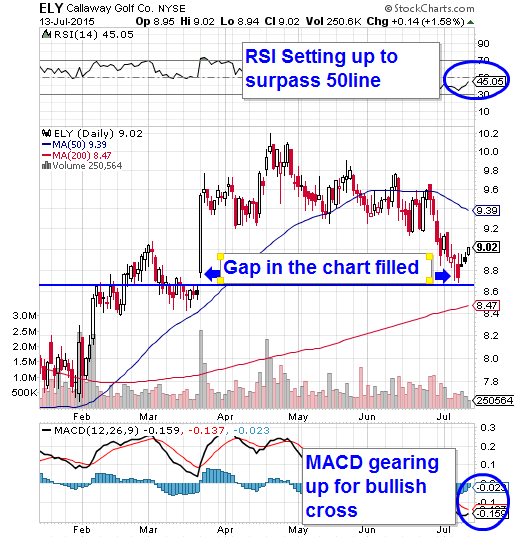 Speaking of ripening charts, we’ve got to tag ETRM this morning as a bottom-play that could be in line for a serious rebound. One look at the chart is all it takes to see what we mean.

We’ve got an egregiously oversold RSI, and the stock has fallen to new 52-week lows in the past couple of sessions.  There are also a couple of gaps to fill from 44-.50 and from .83-.96 on a possible retrace, so we’ll be monitoring this play which we feel has breakout potential based on these factors. 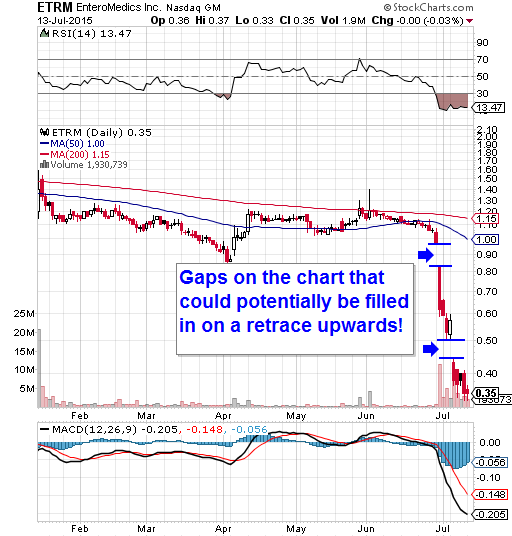 Marijuana Sector Update
–
To kick off the week, we’re turning the conversation back to both medical and legal marijuana-related stocks, a topic that we have covered extensivelyfor over a year now. Many of our old favorites have begun to show signs of promise once again, so we thought this would be a good time to bring them back into the fold as features in today’s morning report.
Medical Marijuana, Inc. MJNA

Each one of the preceding stocks (along with a great many more) has brought us several opportunities for large, or even astronomical gains, as was the case with MWIP from which we were afforded the chance at more than a 5250% profit (Coverage range: .0026-.1398)

Last week each of these began finding its way back to our watchlist as we’ve noticed increased volume, and as we’ve learned extensively in the past, volume often precedes price. Thus we are going to want to keep a close eye on these, and indeed the marijuana sector as a whole, which has yet to reach even a fraction of its full potential. Polls show that more than half of Americans now support legalization of cannabis and cannabis products, and of course we know that some states have already taken the necessary steps to make it available to their citizens.

ELY appeared in Friday’s extended watchlist, then put forth a performance that merits mentioning. The stock touched a daily low of 7.82 very early in the session before enjoying a steady 14% surge up to 8.90, its highest point since 2010.

This comes on the heels of a wave of positive press last week including significantly boosted quarterly earnings: