State of the Cannabis Sector

Shockwaves rippled through the burgeoning cannabis sector yesterday, as the SEC imposed a halt on the trading of PHOT stock (effective through Apr. 24th). Being such a major player in this fledgling market space, the sanction on PHOT caused pot stocks across the board to register losses on the day. Coupled with the general backsliding of the overall markets, many of the pot stocks that we’ve been tracking ended in the red, however our overall feelings toward the sector have not changed.

This was not the first halt of a cannabis stock, with CANN having just resumed trading after its own halt just a few weeks ago. With the free-for-all that was taking place earlier this year at the height of the “Green Rush”, it is unsurprising that some have used the opportunity to take advantage, and only natural that the SEC would tend to these cases in such a manner.

The fact remains that many states have pending marijuana legislation on the docket for 2014, so we can be certain that we are only at the beginning of the story. Just look at the following map of the current state of marijuana law in the US: 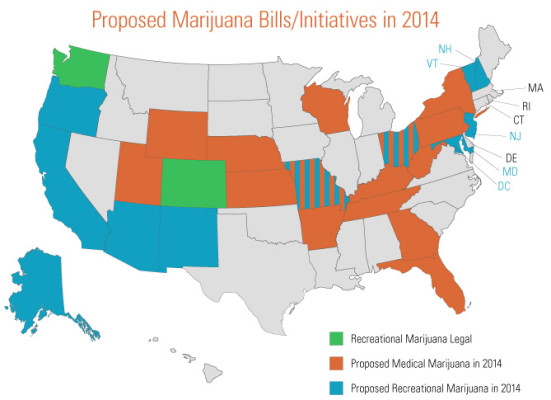 As a whole, the progress that legalization proponents have made over just the past couple of years has been nothing short of astounding. In government, nothing happens overnight; it takes time to change laws, and the pace at which marijuana reform is occurring is impressive.

Bumps in the road like the PHOT halt (and others which are bound to occur) are to be expected, and in fact, makes the need for us to keep our fingers on the pulse of the cannabis space that much more vital. General pullbacks caused by fear and panic like the one we observed yesterday can often be used to acquire cheap stock, which in many cases will yield future opportunities.

One exception to the overall trend yesterday, was a recent successful marijuana-related call of ours, in AVOP. If you recall, when we brought this play to the table on Tuesday, the stock ran from a low of .0006 to .0015, gaining 150%

The following day, AVOP pushed to a high of .0018, moving our total possible gains on the stock up to 200% before coming down to find support in the .0012-.0014 range, which it held yesterday, despite pullbacks occurring all around the space.