Skip to content
AV1 Group, Inc. AVOP
–
First thing’s first; we want to congratulate anyone that caught AVOP off of yesterday’s Extended Watchlist. Marijuana-related news strikes again! The stock traded as low as .0006 early in the morning, and would go on to push as high as .0015 just prior to the close.
–
That was good for an intraday run of 150% from this play on the heels of a press release stating that the company had been the subject of a friendly takeover by the Marijuana Incubator Group, which specializes in cultivation technology. We’ll definitely be following along with this story moving forward.

Yesterday we saw PBR make its first big consolidation since we began tracking its recovery off of all-time lows, but not before gapping up to a new high. It provides a good lesson as to why it’s always a good idea to sell into a gap-up and lock in those profits on strength.

Despite the dip, yesterday’s low of 13.70 is still significantly higher than its 11.25 price when we first came across the play on 03/21. We’d like to see support hold at or above that 13.70-mark, or risk seeing a more substantial pullback. Below that, the next level of support is the 200DMA at 13.47.

Overall, PBR and its options chain has exceeded our expectations at every turn, and provided it holds the level of support we just mentioned, we still like the May $12, and April $14 Calls for longer-term chances, and the $13.50 and $14 Weekly Calls for possible short-term opportunities.

One of the potential bottom-plays we put forth in yesterday’s morning report went on to have quite a session. FRMC traded in a range from .031-.0489, representing a positive intraday move of 58%

It also marked the third consecutive session of the stock making both higher lows and higher highs, further confirming the uptrend off of its recent bottom.

We also want to point out one of our recent interests with fresh news hitting the wires this morning. We’ve been expecting an update from UTRM and it’s finally arrived:

LOS ANGELES, CA–(Marketwired – Apr 9, 2014) – United Treatment Centers Inc. (OTC Pink: UTRM) (PINKSHEETS: UTRM) DBA www.PotNetwork.tv: “We have closed our first round of financing and will launch full scale website/video operations on 4/20/2014. After fielding several offers, we have put together a structure that enhances shareholder value and is commensurate with our long term objectives” >> FULL PR

Speaking of marijuana-related plays, we will be re-alerting one of our old favorites tomorrow, be sure not to miss out on Thursday’s report hitting your inboxes between 9-9:30AM! This stock is primed with the potential for a serious move, so stay tuned!

To really see the full scope of the gains we’ve seen from BGMD this year, we have to track back to the end of 2013. Following an appearance in a report we released on Dec.10th, the stock would settle to a low of .87, and it has been doing quite well ever since.

In early January, we saw BGMD break the 1.50 mark, at that point already up significantly from its prior low. It would spend the rest of the month under a gradual consolidation (to around 1.12) until early February, when another uptrend began.

Flash forward to our recent alert of the stock on March 12th. After two days, we would see BGMD touch a low of 1.28, and from there it has taken off like a rocket. It set a new high of 2.419 during trading yesterday on news of positive results from a series of recent clinical trials.

That high marks a sizable 89% gain from its Mar.14th low, and a highly impressive overall move of 178% from the low we caught in December.

Our first post on PBR came last Friday, at which time we professed our interest in the May 2nd $12 Calls. At that point, the contracts were trading at a low of .31. Yesterday, just three sessions later, as a result of the continued recovery of PBR stock off its recent all time low, the $12 Calls hit a high of .56 (+80%). 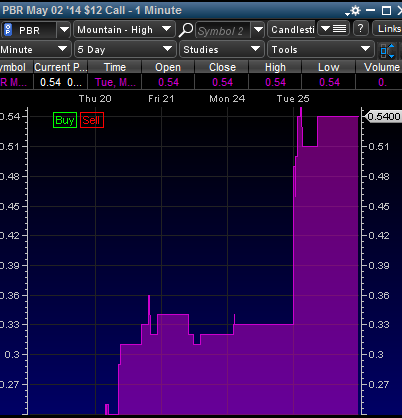 We going to be adding a new interest to our radar today,  in the form of RLTR. What makes this one especially interesting for us, is that Reeltime co-produces one of our favorite shows, CNBC’s “Money Talks”. News out this morning announced the airing of this season’s second episode, tonight at 10PM on CNBC.

On the stock side of things, RLTR has already seen a nice move this year, running from as low as .001, to a high of .025. It then consolidated to find support at .0061, and has now begun to bounce off of that low. The chart recently experienced a Golden Cross, and currently the PPS is holding support above the 50 & 200DMA’s, two bullish indicators.

All of those reasons definitely make RLTR one stock that we will be observing for the foreseeable future.

Another pick, another great day of gains! UTRM became the latest new cannabis-related stock to make its mark. We were on top of it, placing it on high alert in yesterday morning’s report and reaping profits on the way up, employing the tried-and-true strategy of selling into strength.

This onslaught of activity is going to have us paying attention to UTRM for quite some time. It’s possible that the company could produce a PR this week regarding the official launch of its new website on Thursday.

It’s also worth mentioning that UTRM is currently receiving a 100% “Buy Rating” on BARCHART.COM.

MLCG continued to be one of our most productive recent points of interest yesterday. If you recall, we caught this play at the beginning of this month, and have seen a low of .04 as recently as the 12th which was followed by double-bag gains.

Yesterday, the stock posted another bang-up session, running 85% from a low of .10 all the way up to .185 on substantial volume.

From its recent low following our initial alert, MLCG has now risen as much 363% in just under two trading weeks.

ROTH is a momentum play that we’ve been keeping our eye on over the past few days. Currently the chart is exhibiting the telltale signs of a bullish trend, as you can see below. The RSI has punched into the power zone for  the third time this month, there has been a recent golden cross, and the MACD is diverging. 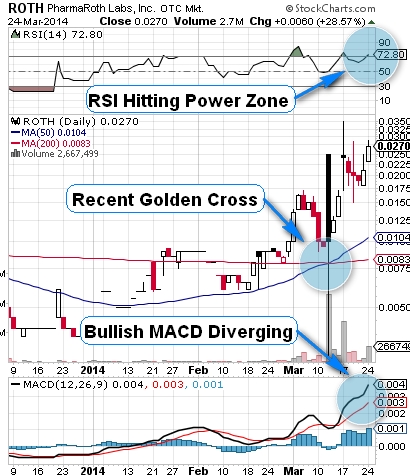 We’ll be watching for a possible continuation of the recent trends this mid-week.  Like UTRM, BARCHART.COM is also giving ROTH a 100% “Buy Rating” at the moment.

After the $11 PBR Calls made a nice triple-digit move for us on Friday, we continue to take advantage of the stock’s recovery. The 05/02 $12 Calls, also mentioned Friday, that we re-tagged in yesterday’s report are now up considerably, and could be on the way to making similar gains.