Only seven trading days have elapsed since we slated some longer-term Apple options ideas for observation on the 1st of this month. We were looking at the AAPL 06/01 $167.50 & $170 Calls and we’re pleased to return just over a week later to report that AAPL has mounted a heck of a seven day upswing, facilitating some fantastic gains in our flagged contracts.

We also had some fresh options ideas in yesterday’s morning report, the TRIP Weekly $45.50 & $46 Calls. What we got from those, was a highly respectable intraday performance.

We want to place HMNY on intensive bottom watch this morning after noticing the setup on the chart. The stock has been absolutely punished over the past couple of trading days, and as you can see below, the RSI is now in heavily oversold territory.

The last time the stock was this oversold, at the beginning of April, it recorded an upswing of over 100% so we’ll want to keep an eye on its activities. at least for the remainder of the week, and possibly longer. 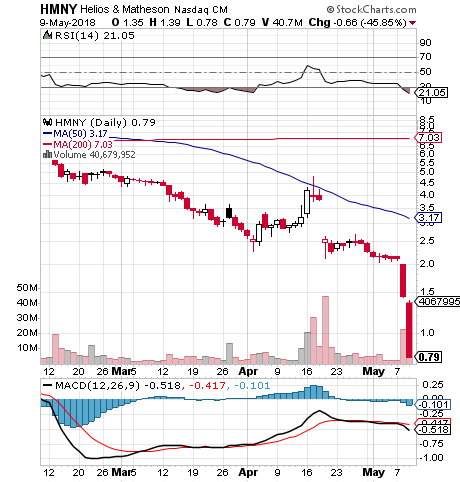 Our initial alert on MARA came on Thursday morning along with a low of .22, as we were just mentioning in yesterday’s premarket report. We had already seen a 100% move on Friday leading into yesterday’s session. We mentioned that MARA could see the .50 range or better yesterday before the session kicked off, and it’s as if we had a crystal ball.

After signaling AVEO on Friday morning and watching it set a new 52-week high on the day on enormous volume, we doubled down in yesterday’s report, stating that we wanted to continue to track its progress for continued upward activity, and it was good thing we did.

AVEO wasnt finished, and yesterday’s session was the strongest performance we’ve seen yet. The stock ran fom 1.33 to 2.11 for a 58% intraday rip, and a total two-session swing over our observed low on Friday (1.05) of 100%

We tagged RNVAZ in yesterday’s premarket watchlist, and it turned out to be a great play for the day. It traded up from a low of .05 to as much as .1446 inside of the first 40 minutes of the session.

That worked out to an intraday pop of 189% and it happened on a daily volume of more than 21X the monthly average.

DRI (owner of Olive Garden) posted boosted sales and outlook in an impressive earnings beat, and we want to signal a range of options to coincide with what could be a surge of bullish activity. We’ll be focusing our attention on the DRI 07/21 $90-97.50 Calls for potential swing trades.

We tagged VSLR back on May 18th at a low of 2.75. On Friday, we were just mentioning how the stock had continued to bull its way up the chart, and we’ve yet to see a down day in nearly twenty trading sessions.

Yesterday VSLR hit a new high of 5.85 marking a total swing of 113% over our witnessed low, and closed at that mark as well. At some point very soon the growth will become unsustainable, granted how overbought the stock is at the moment, but for what it’s worth, to this point, VSLR has been one of the most steady risers we’ve seen in recent weeks.

We’ve often said in the past that it’s better to be early to the party than late, and ANY is a perfect example of why. We tagged this play on Wednesday after noticing some unusual activity the previous day, and things didn’t really kick off right away. We observed a low of .15 during that session.

Yesterday is when things really moved into high gear, with the stock having an excellent day, trading in a range from .1941 on up to .29 for a 49% rip, and we’ll definitely want to keep tracking the activity into today, as the premarket high has equaled yesterday’s daily high.

From the low of .15 that we saw on Wednesday, ANY’s total upswing thus far has amounted to 93% Quite a respectable two-day jump.

Vivint Solar VSLR Recap – Speaking of solid movers, we also wanted to quickly update the total observed range we’ve seen on VSLR, which reached a new high of 5.50 yesterday. From our witnessed low of 2.75 following our report on the morning of May 18th, that comes out to a nice, round 100%

We want to radar AVEO in the wake of the announcement that its advanced renal cell carcinoma treatment has been recommended for EU approval by a scientific committee of the European Medicines Agency. The stock has gapped up into Blue Skies this morning as a result, with a new 52-week high of 1.28.

Concerning the chart itself, the 50DMA is rising toward the 200DMA and it appears as if a Golden Cross is imminent.  We’ll want to see AVEO hold at or above recent resistance at .89 on any dips in order to hold our interest.

We’re bearish on BBBY following the company’s post-market earning miss yesterday, which has caused a breach of trend-line support to the low side. We’ll be observing the BBBY Weekly $31.50-30.50 Puts* for possible day trade opportunities.

*We don’t include mentions of weekly options contracts on a Friday without explicitly warning our readers every time. Trading weekly options at the end of the week is a hugely risky proposition that should never be attempted unless you are an expert trader!