Last week was incredible for our bitcoin-related options ideas in MARA and RIOT. In the span of a few short days, we saw our targets rocketed into the stratosphere for percentage gains in the thousands! It was a good first impression for the dozens of new subscribers we had pouring in, and a sign of what’s to come.

With the popular cryptocurrency hitting new all time highs, and breaching the $50K mark for the first time this morning, we are going to reformulate some fresh ideas in these options chains for what figures to be another extremely interesting week for crypto plays.

Take Your Trading to the Next Level

Speaking of new subscribers, we are still taking on participants in our newly launched premium service. We have already enrolled dozens of eager traders, and encourage anyone with interest to contact us today about becoming a premium member.

Here’s the current pay schedule, subject to change as membership continues to grow, so secure your spot now:

– $125: Same as above, also includes video of new and archived bi-weekly classes

To get enrolled today, please send an email with your contact information and a brief description of your trading history to bullinadvantage@aol.com

Our primary focus for yesterday morning’s premarket report was our running options idea from last week. We were mentioning that the WFM 02/17 $30 and 30.50 Calls had begun to heat up, and we didn’t want to miss out on the activity that seemed ready to kick our idea into effect.

We also mentioned that a break of the 50DMA at 30.76 for WFM would prompt us to look at contracts with a higher strike price and later expiration, the WFM 02/24 $31 Calls. We did indeed witness a breach of that price point toward the end of the session, and those calls came into play as well, running from 20-.35 for a chance at a nice 75% gain.

Should the solid uptrend WFM has been putting together continue into future sessions, these could be an ongoing item of interest for us.

ZSAN is a play we highlighted on Monday after the company reported that in its ZOTRIP pivotal efficacy study, its M207 transdermal migraine therapy patch met both primary, as well as secondary endpoints.

We mentioned that not only were we going to experience the effect of positive study data, but a technically ripening chart as well, leading us to put the stock on high alert in coming sessions.

It was a good decision, as the stock has really gained momentum this week, putting together some solid sessions. In fact, yesterday the stock closed as the NASDAQ’s top gainer of the day. We’ve watched as ZSAN has traded up from a low of 1.65 to yesterday’s new high of 3.49, representing an intraweek upswing of 112% Cheers to those of our readers who came along for the ride!

We put OPK on bottom watch earlier this month, and after a few sessions of further consolidation, the past four trading days have shown some convincing bottom-bounce action.

The stock ultimately found support at the 7.99-level last week, from which it has logged five straight sessions of higher highs and higher lows, reaching 8.66 yesterday. While that action only equates to an 8% increase, it’s the massive gap on the chart to the upside from just under $10 to just over $11.50. We’ll look for the stock to continue to build gradually and maintain the current trend in hopes of seeing a run toward a gap-fill.

NVAX continued its multi-day recovery with a fourth straight session of intraday gains leading to a new high for us yesterday. We’ve talked about it almost every day this week, initially bringing it up in Monday morning’s report; at the time the stock was trading as low as 1.36.

It has made some nice, steady progress, and yesterday the stock made its way to  high of 2.25, marking an intraweek upswing of 65% on extremely heavy volume throughout.

We’ve also taken notice of series of Form-4 buys that were reported after hours yesterday, the largest of which was a 100,000 share block at an exercise price of 1.72. We’ll look for the stock, to maintain support at or above that level on any pullbacks moving forward in order to stay interested in tracking it.

This is another play we’ve been tracking since last Friday, and it too has managed an excellent uptrend this week, after we initially observed a low of .0036 subsequent to indicating our interest. Yesterday the stock traded in a range from .0065-.0125 for a 93% intraday push, and that new high marked a one week swing of 247%

We’re definitely going to stay on its trail heading into next week, provided it can hold support in the channel between .0072 and .01 on any upcoming pullbacks.

Part of our bottom-watchlist that we submitted for Tuesday morning’s premarket report, AIII has made solid steps to the upside throughout the rest of the week, confirming the fact that we timed the bottom with absolute precision.

From Tuesday low of 1.0194, the stock has sustained a good recovery, and made its way back to a high of 1.32 yesterday (+29%). This is another one we’ll continue to follow into next week, as there still appears to be room for it to run.

As we’ve pointed out on the annotated chart below, the RSI is gaining strength having just breached the 50-line, the MACD is on the verge of a bullish cross, and the PPS is approaching key resistance at the 50 and 200DMA’s of 1.33 and 1.35 respectively. We’ll continue to monitor the situation as we close out another trading week. 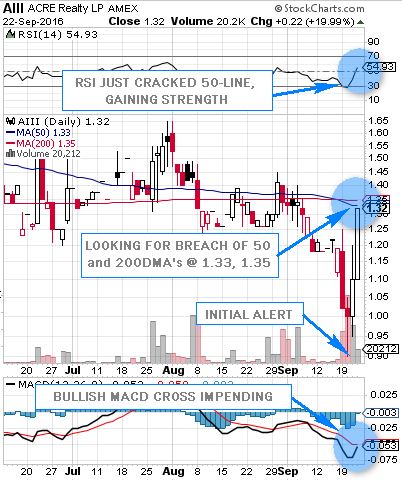