Yesterday, as we were congratulating those of our members who had caught our tag of LOTE in last Thursday morning’s premarket report, which ran 70% from .0037- .0063 on Friday,  we mentioned that our continued interest in the stock was predicated on it maintaining support above .0046. Not only did it manage to do so, but what followed was a monstrous session that carried it from subpenny territory, on into Pennyland! It was a truly excellent way to kick off the short trading week.

From a daily low of .0052, LOTE roared its way to an afternoon high of .0152. a move of exactly a penny, which provided the chance at intraday gains of up to 192%  From our observed low of .0037 from the prior session, that represents a two-day swing of 311% The move came in conjunction with the stock’s third-highest trading volume of 2016, and the close came just two ticks below the HOD, at .015.

We’ll certainly have LOTE, which now qualifies as a momentum-play, near the top of our watchlist as we progress through this holiday-shortened week. On any pullbacks, we’ll want to see the stock maintain support above a penny.

Another solid pick from yesterday’s report came in the form of BIND, a company that had filed for Chapter-11 this spring.

We caught this one on the heels of its acceptance of Pfizer’s $20M stalking horse bid, in which the pharma giant intends to acquire most of the bankrupt company’s assets barring the submission of any higher bids when the assets go to auction later this month.

As for the opportunity that was present following our inclusion of the play in yesterday’s morning report, BIND traded in a daily range from .57-.79, a respectable single-session rip of 39%  We’ll continue to track this play in the event it can hold support above yesterday’s swing low.

On Friday morning, we marked SFEG for tracking, and what has followed is two big sessions of solid gain opportunities. Before breaking for the holiday weekend, the stock traded in a range from .0115-.0165 for an initial gain of 43%

Then yesterday, things really took off in a northerly direction as the stock traded up from .0194 to an impressive new high of .044. That came out to a single-session jump of 127% and a two-day swing amounting to 283%

With the stock firmly in blue sky breakout territory, we’ll want to continue to keep an eye peeled to monitor its activity going forward. Considering the kind of volatility we’ve witnessed thus far, a dip-and-rip scenario could be waiting to play out on the chart.
_____

Added Note: Speaking of gold plays, the markets experienced a selloff yesterday, and appear to be in line for another possible downturn today. As such, we’ll look to these gold-related stocks as a corresponding idea.

Good morning traders! We’re back to kick off another trading week, and we’re going to start off by taking a look at an early mover in HZNP. The stock is gapping up moderately on the tail of a mixed-result earnings release, as a well as the announcement of a 5M share repurchase program.

We’re interested in signaling a pair of options contracts in the HZNP chain for observation, should the bullish sentiment we’re seeing here in the premarket boil over into the session.

Our targets are going to start out as the HZNP Weekly $14 and 15 Calls. Key resistance is currently sitting at the 50DMA of 16.15. In the event that HZNP were to test and breach that boundary, we’d look to roll up our strike price to the $16’s.

YELP was included in our watchlist on Friday, and the stock produced a bullish performance on the day. We observed a 13% rise on the day from a low of 23.66 to a high of 26.75. That’s a respectable single-session move out of a stock in this price range.

Moving forward, we’ll be watching closely for YELP to maintain support above its current 200DMA of 23.55. That will act as our deciding point on the chart. Should the stock hold above that level on any pullbacks, we’ll look for possible swing-trade opportunities in YELP Weekly $24-27 Calls. Failure to hold that price point would signal us to flip to the bullish side and the $27-24 Puts.

We also want to put SQ on a bottom-watch this morning after a post-market earnings call on Thursday precipitated quite a bit of fallout during Friday’s session. Despite a boosted outlook for the remainder of 2016 and big-time growth compared to the same quarter last year, SQ was absolutely hammered.

That makes it fair game for a potential rebound in coming sessions, so we’ll have it on our radar for that possibility. If it appears that a recovery is imminent, we’ll look to use in-the-money calls to leverage some nice gains out of this play.

We often include this related pair together and have mentioned them several times in past reports. Most recently was a week ago today, when we called attention to the fact that their [nearly identical] charts were trading at a relative bottom and looking ripe for a rebound. It didn’t take long for our expectations to come to fruition, with both stocks posting solid performances during yesterday’s session.

We took notice of the momentum that had built up in REXX yesterday, leading us to include a mention of it in our premarket report. We liked its chances of continuing the pattern it had established on the heels of a purchase agreement announcement, and that’s just what it did.

From a morning low of 1.03 we witnessed REXX run as high as 1.44 shortly after 1PM. That registers as an intraday pop of 40% We’ll continue to keep an eye on this play provided it can maintain support above a dollar on any pullbacks.

Added Note: GEVO was another one from yesterday’s report to trade solidly in the morning and early afternoon. The stock made a relatively small 20% intraday move from .25-.30. It’s still hovering around that high early on today, so we’ll be leaving GEVO on our radars also, for the time being.

We also wanted to remind our readers of the plays we’ve been tracking recently that are tied to big oil:

Both have been putting up solid performances with oil having been on a bullish tear in recent sessions. It appears as if many oil stocks are gapping up in the premarket, so we’ll be interested to follow the resultant action in our own oil-related interests. In the case of Petrobras, we want to go ahead and signal a possible options idea: We’ll be looking at observing PBR Weekly $6 & $6.50 Calls over the remainder of the week.

We also want to take a second to comment on the early move made by another of our recent items of interest, SFOR. In the video chart we published, we mentioned needing to see it hold above a specific support level and it managed to do so for the first part of the session. The stock caught a bounce off of the .0026 level and ran 62% intraday to .0042.

That daily high represented an overall new high for us as well. We’ve now seen a total jump of 500% over our observed low of .0007 from the day of our initial alert on March 31st. 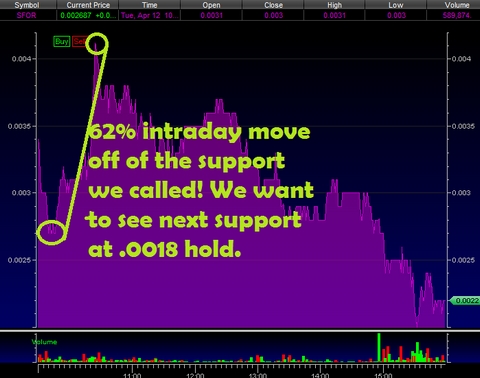