Our attention was drawn to STZ yesterday morning, because while the market in general was lagging, STZ was going against the grain with a premarket gap-up. We wanted to signal some calls in the STZ options chain that we felt would provide the chance for quick-strike profits, and ultimately settled upon STZ 01/15 $135-150 Calls.

Our idea turned out to be spot-on, with every set of contracts in our target range making appreciable intraday moves:

As we can see from those numbers, the heaviest action obviously fell at the high end of our specified range, and from this point on, we’ll be continuing to monitor the $150 Calls as well as possibly rolling up to the $155 Calls based on the gap-up we’re now seeing in today’s premarket activity.

It was just a couple of days ago that we were giving ourselves a pat on the back for putting CRCO on our radars back in mid-December, allowing us to witness the run it made earlier this week from .0011-.0054 (+391%).

Yesterday, the stock mananged another big intraday spike which carried it to new highs and increased our observed range on the stock considerably. From an early swing low of .0037 CRCO surged 170%, up to a new high of a penny. It marked an overall jump of  809% over Monday’s low.

SBFM is another play we’ve been tracking this week that has gone from subpenny to penny prices in a heartbeat, and it too set new highs during yesterday’s trading session.

The stock ran 85% intraday from .017-.0314, and that newly established high extended our overall observed range on SBFM  from its low of .008 on the day of our initial alert on December 29th, to a whopping 292%

Fresh Options Idea – Based on this morning’s market activity we want to radar SPY Weekly $194.50-197.50 Calls for possible day-trade opportunities.

Yesterday we put four stocks on bottom-watch, and we’ve got another potential bounceplay to add to that list. In this case the rebound may be forthcoming, as premarket activity suggests so we’ll keep a close watch over   Sandridge Energy, Inc. SDOC which absolutely fell off a cliff yesterday. 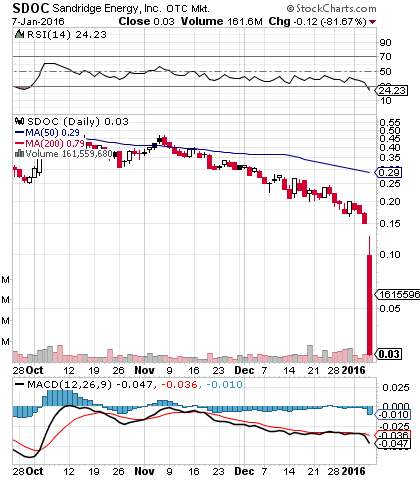 Yesterday, we recapped the huge performances from the options contracts we designated for tracking in Tuesday’s premarket report, which returned the possibility of intraday gains ranging from 87-410%

Those were the GPRO Weekly $31-32.50 Calls, and the FB Weekly $90-91 Calls, and based on what we were seeing in yesterday’s premarket, we also offered our opinion as to how things could play out from that point forward.

To the folks just arriving to the party, so to speak, we suggested “waiting for the dip caused by profit-takers to ride the subsequent rebound.” The action in our observed contracts essentially transpired according to our expectations, and once again, impressive intraday profits were there for the taking.

In addition to the initial ranges listed above, even more added gains were technically possible, as market action allowed for secondary swings in almost every case.

The markets appear strong in early trading once again, so we’ll be approaching today’s session in much the same fashion as we have the preceding two, except today we’ll be looking to modify our strike prices according to present conditions.

We included this subpenny stock on our extended watchlist yesterday, and COLV manage to record its third consecutive session of higher highs and higher lows off of its recently registered annual low (.0012).

It ran from .0024 to a daily high of .0037, which represents an intraday gain of 54%. COLV will need to continue to establish higher base levels of support in order to keep our attention going forward.

Speaking of extended watchlist plays, on Monday we tagged GEQU for tracking, and have been met with the chance for some respectable intraweek gains. The stock logged a low of .021 on Monday, and as of yesterday’s high of .036, we had witnessed a 70% increase.

The GEQU Chart appears quite overbought, but the same has been true in recent weeks and the stock has been on a continual uptrend. We’ll be on the lookout for the possibility of further increases while remaining open to the fact that a consolidation could be in the cards, and in that event, staying ready to take advantage of a possible dip-and-rip scenario.

Yesterday we tagged MEET for the first time since last year, and our timing in turning our attention back to it was excellent. On the strength of improved Q2 guidance published in a premarket PR, the stock made a healthy intraday move.

From a morning low of 1.66, MEET went on to hit an even 2.00 high toward the end of the session; a 20% swing. Volume was excessive, on the order of roughly 22x the 3-month average. Ideally, we need to see MEET maintain support at or above the new 200DMA of 1.74 on any pullbacks in order for us to remain interested.

At the end of last week we were monitoring MJMJ for a bottom, After coming up off its bottom on Tuesday and providing us with a quality  opportunity, MJMJ continued to perform well with a nice intraday surge.

From our observed low of .0027, we’ve seen an overall increase of 104% over a period of just a few sessions. With many cannabis stocks beginning to show increased signs of life lately, we’ll be sure to continue monitoring this play and others in the sector.

We want to keep an eye on CBLI after this morning’s big announcement (link below), which has essentially caused the stock to enter into Blue-Sky Breakout mode this morning, cracking through its 200DMA of 5.35 in the premarket. If it can maintain that 200DMA as support on an early pullback, we could see added increases.

Regardless, whenever we run across a stock in this position we’re always on the lookout for dip-and-rip scenarios to occur after a consolidation. It’s a pattern that we’ve seen played out time and time again.

We also noticed a PR published on PZOO for the second consecutive day. After yesterday’s big announcement that the company had fully acquired MA & Associates’ marijuana testing business, today we learned that the company’s other subsidiary has signed a new, potentially lucrative distribution agreement.

Pazoo is another company that falls under the category of those doing everything they can to capitalize on the ever-expanding marijuana sector. It has remained extremely active in pursuing that goal over the entire time we’ve been tracking the stock.